The following are definitions of some common terms you may run into as you review your blueprints, plan for home construction, or build your house.

A molding that goes around the perimeter of a room at the base of the walls.

A cabinet that generally rests on the floor with a toe-kick and countertop.

A small rectangular piece of wood positioned vertically to cover the seam of adjoining siding boards. 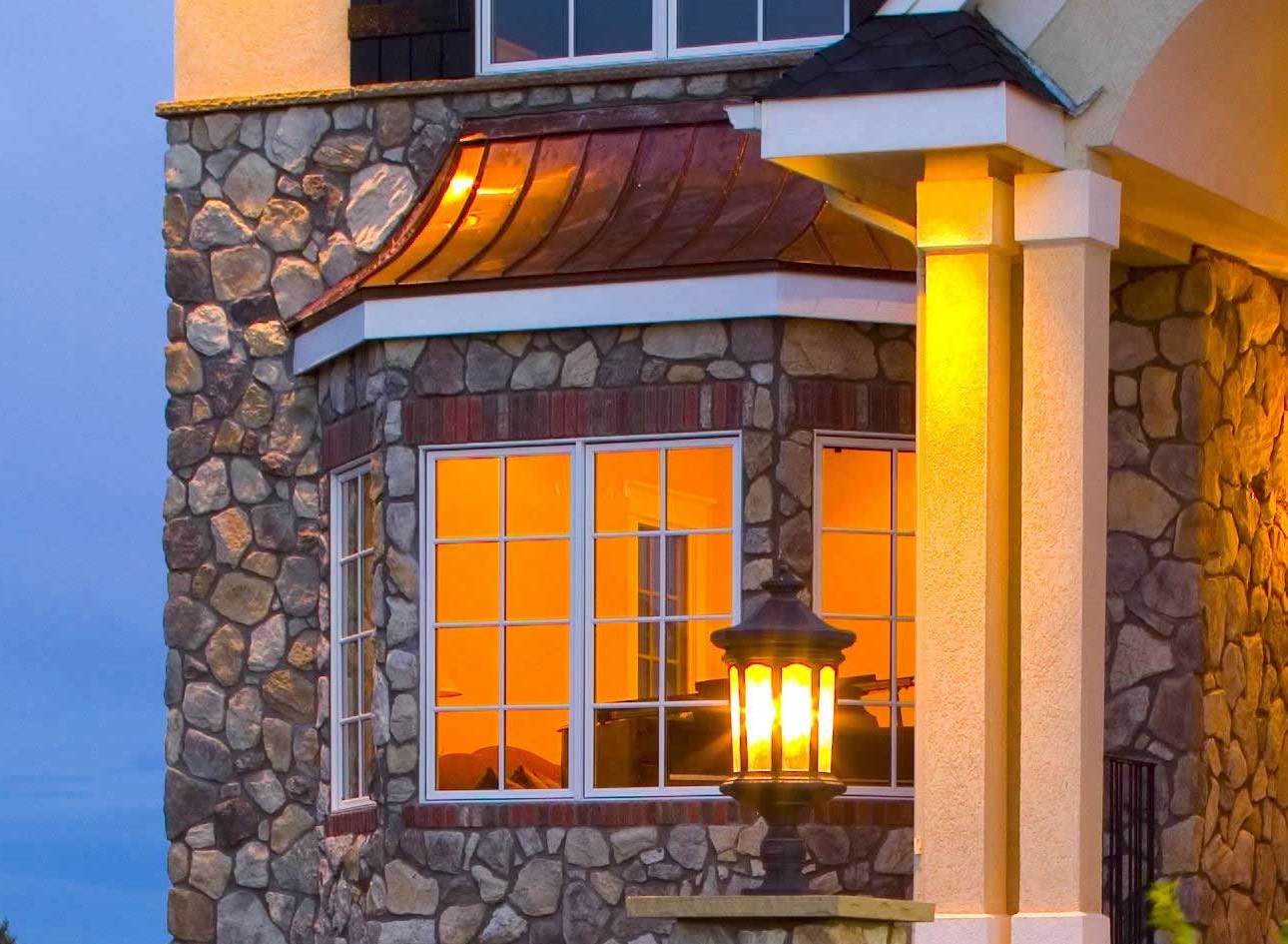 Two side wall segments are attached to the main wall plane of the home project at some angle and adjoin a wall section parallel with the home's main wall surface. Each wall section contains a window (or windows). To learn more about window design options, see our blog post "Window Designs for Your New House Plan."

Any wall that carries a structural load.

Usually used for interior closet doors, a bifold door is made of two hinged panels that fold to one side of the opening.

A notch that is cut out of a rafter where it rests on a bearing wall.

A window consisting of many wall segments that create an overall arch or curve out from the main wall surface. Each wall segment generally has its own window. 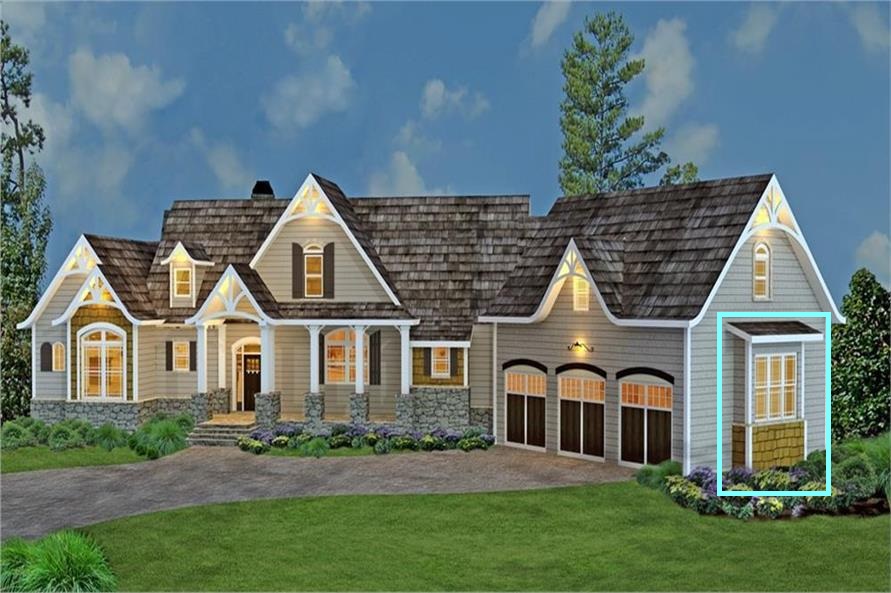 Bridging
A short horizontal framing member that joins to studs in a wall (often called blocking or fire blocking).
Casing

Pieces of wood trim surrounding a window or door.

A window that pivots on a side hinge much like a door with a handle to crank the window open.

A ceiling that follows the underside of the roof or rafters, creating a sloped surface. Many home designs with great rooms will have cathedral ceilings. 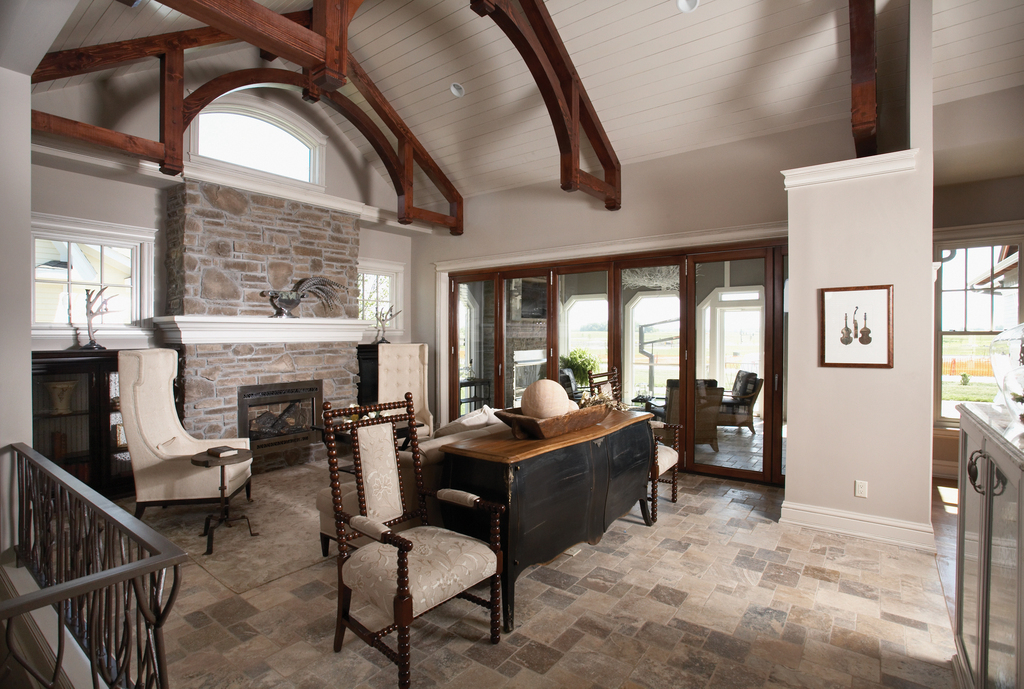 Traditionally used to protect the walls from chair backs, a chair rail is a molding that typically goes around the room's perimeter at the chair back height. This style of trimwork is particularly popular in Colonial, Georgian, and traditional homes. 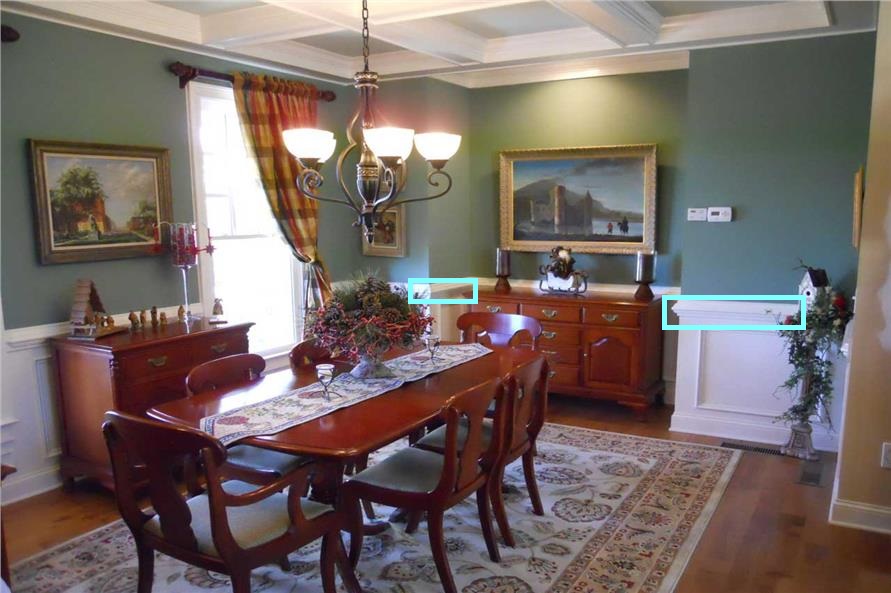 A coffered ceiling generally follows the underside of the roof planes up to a specific height where the ceiling is then flattened. 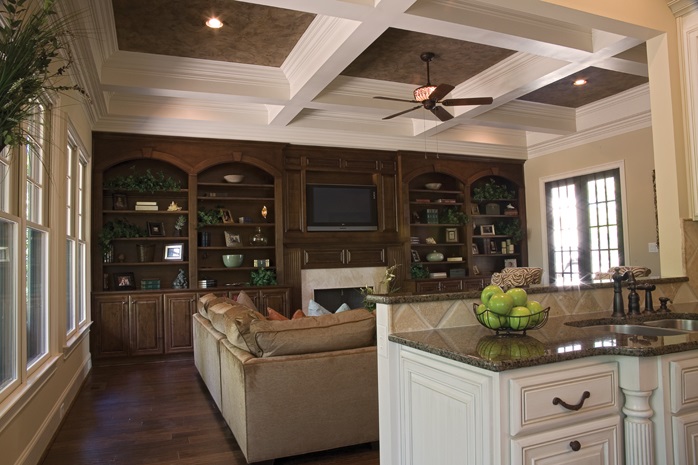 A decorative molding placed at the joint of a ceiling and wall surface. Crown molding or crown trimwork will enhance the style and attractiveness of most traditionally-styled rooms. 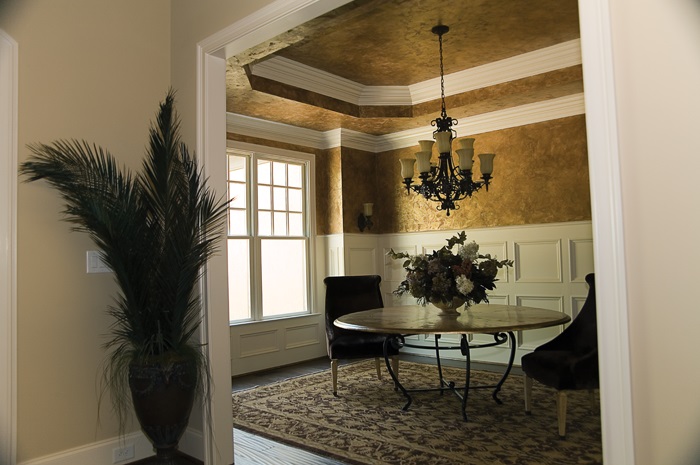 A projection of vertical walls through the sloped roof plane with a window and its own roof ties into the home's main roof. Dormers allow the natural light to enter into upper floors or attic spaces. Dormers are particularly popular on Cape Cod house plans. 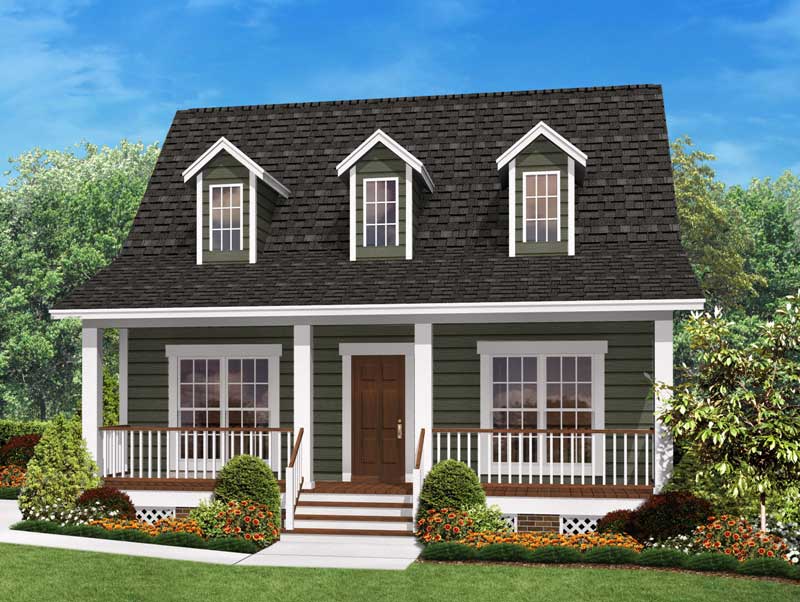 A roof with gables extending past the normal ridge of a hipped roof with the hipped roof planes on the lower section. Also called a half-hipped roof since a part is hipped and part is gabled. 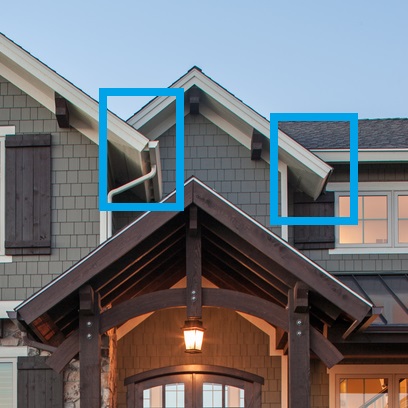 The metal trim that is placed on the edge of the roof covering the seam between the roof plan on the eave and the fascia board. Sometimes referred to as drip edge.

Building codes regulate egress windows by establishing a minimum size requirement that can be adequately used as a fire escape.

A view of an architectural model taken horizontally, looking at a vertical surface in a design. 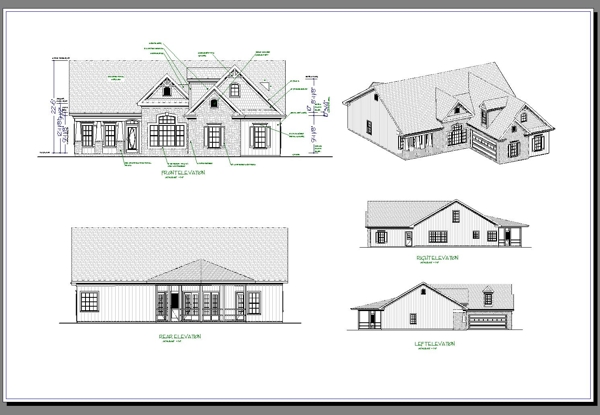 A horizontal board positioned on edge and attached to the ends of the rafters or truss ends where gutters are typically supported. This is called an eave fascia. Fascia placed on the end of a gable roof end is called gable fascia.

Any electrical, HVAC, or plumbing appliance or article that is attached to the structure. (e.g., sink, tub, water heater, furnace, etc.)

A trim member placed at the top of an exterior wall where the soffit of an eave and the wall surface meet.

When a roof pitch end terminates at an exterior wall, a triangular shape is created within the roof planes. This triangular wall section is called a gable. 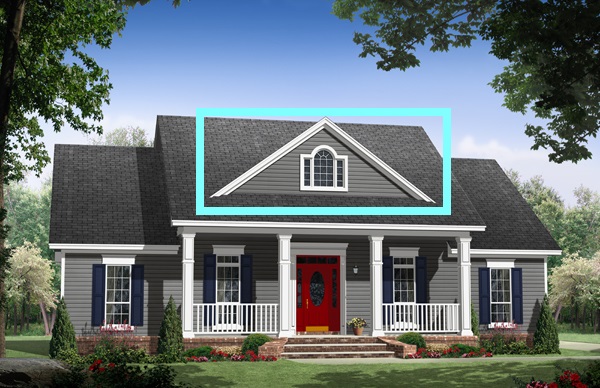 A pitched roof terminating in a gable at one or both ends.

A gable roof where two roof pitches are used on either side of the triangular shape. The upper section toward the ridge is generally not as steep as the lower section of each side. 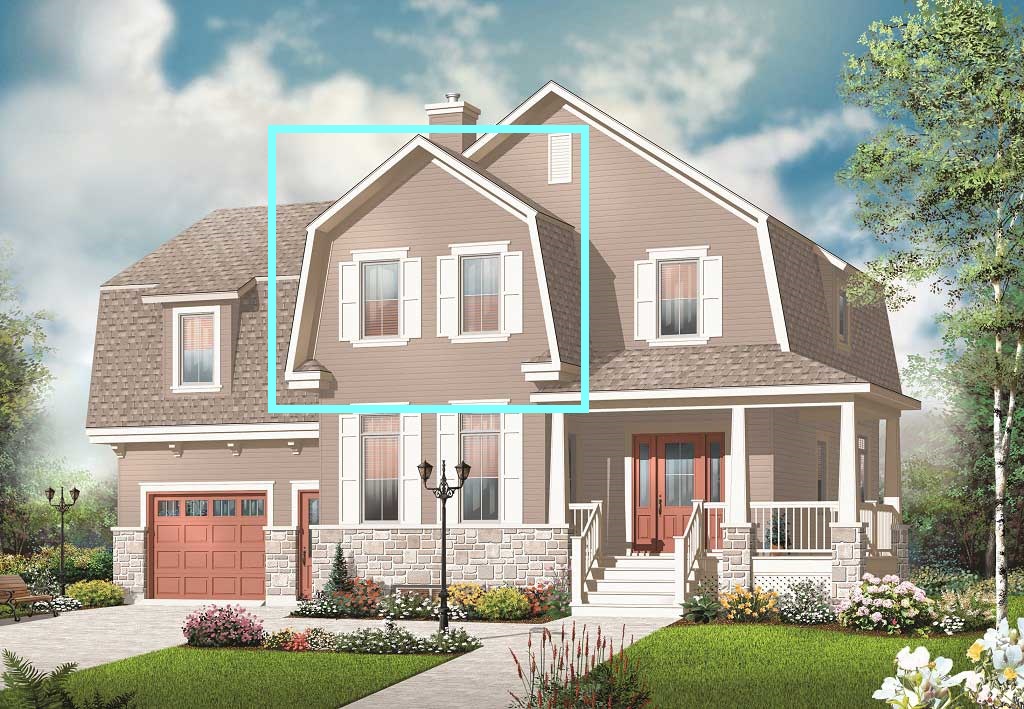 A truss that supports other trusses that are perpendicular to it.

A Gull wing roof is the opposite of a gambrel roof, where each side of the gable is divided into two sections. On a gull wing roof, the upper section is steeper than the lower. 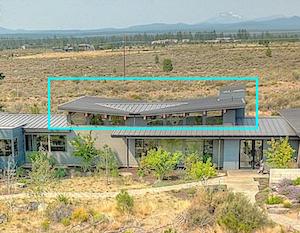 A channel attached to the fascia board designed to carry away water that runs off the roof surface.

A half hip roof has two gabled ends. Near the peak of the gable, there is a small hipped section that extends to the ridge. 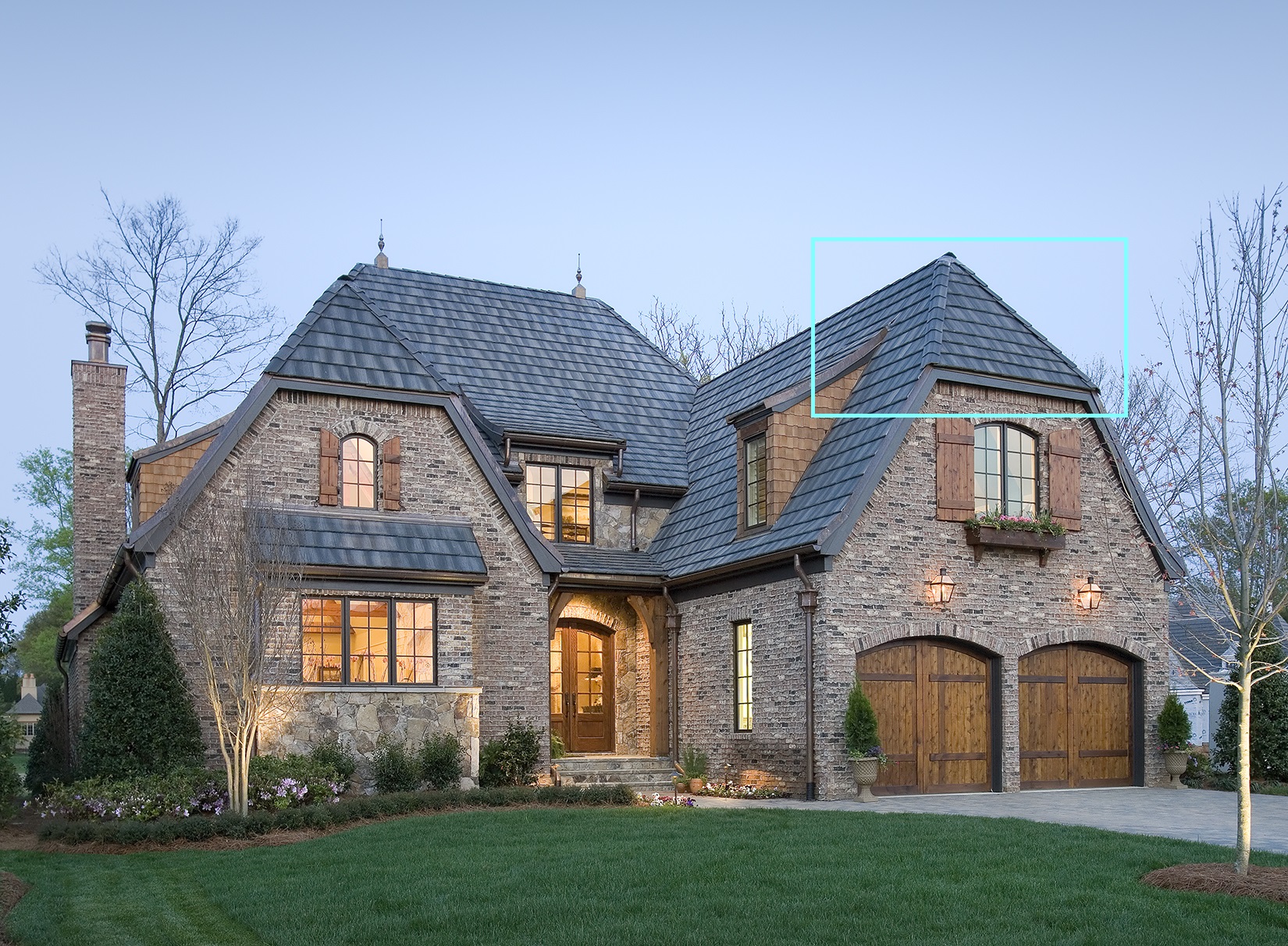 A platform at floor level that extends in front of a fireplace. This surface can be raised but is then generally referred to as a raised hearth. We take a closer look at the latest trends in fireplaces in this blog post.

A home with a hip roof has a roof place sloped upward and toward the middle of the home. A hipped roof maintains all the eaves level all the way around the home. 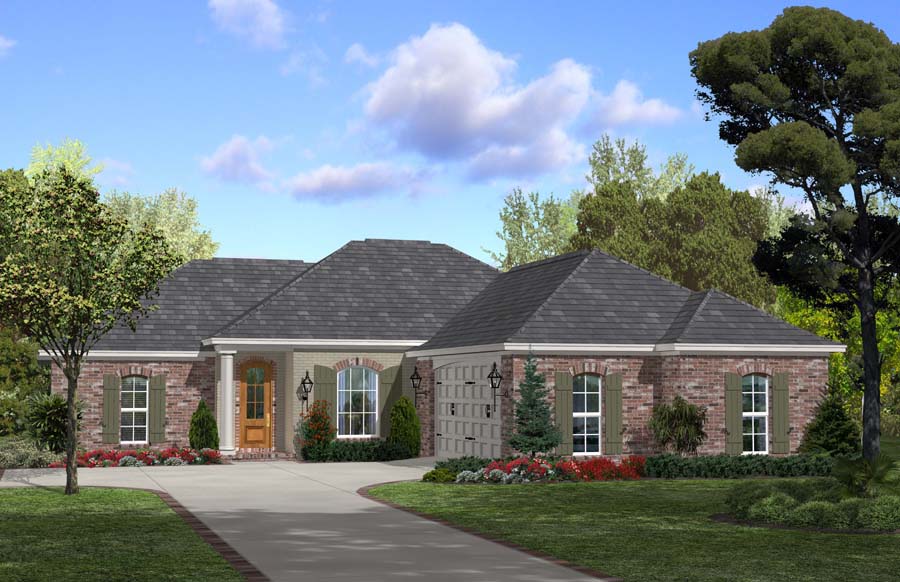 Heating, air conditioning, and ventilation equipment. To learn more about heating and cooling, check out our Heating and Cooling Dos and Don'ts blog post.

A horizontal framing member usually spaced at a regular interval and used to support a floor or ceiling.

A short wall on an upper floor that is not regular height because a roof plane extends through its surface at a lower point. A knee wall is usually parallel to exterior walls but set in several feet from the outer surface. It is not uncommon to find knee walls in house plans with bonus room layouts. 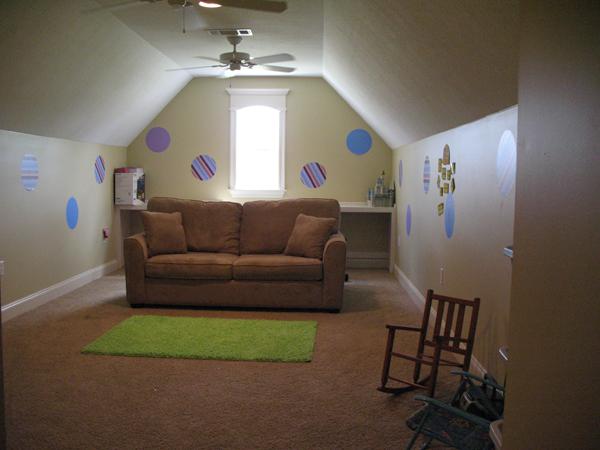 A level platform that is between two sections of stairs.

Separated glass areas in a window, usually separated by some sort of grid pattern.

A mansard roof is a hipped roof with two separate roof pitches within the same plane. It is often referred to as a hipped gambrel roof. It is a roof style that is often associated with classic French or European-style home designs.

A single slab foundation for a house that incorporates footings at its edge without any joints. 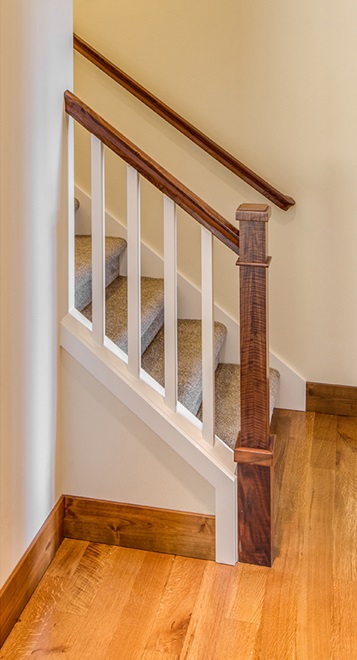 Piers are created by filled drilled holes in the ground with concrete reinforced with steel. Beachfront homes are often built on pier foundations, as discussed in this post.

A post or newel that extends to the ceiling height. 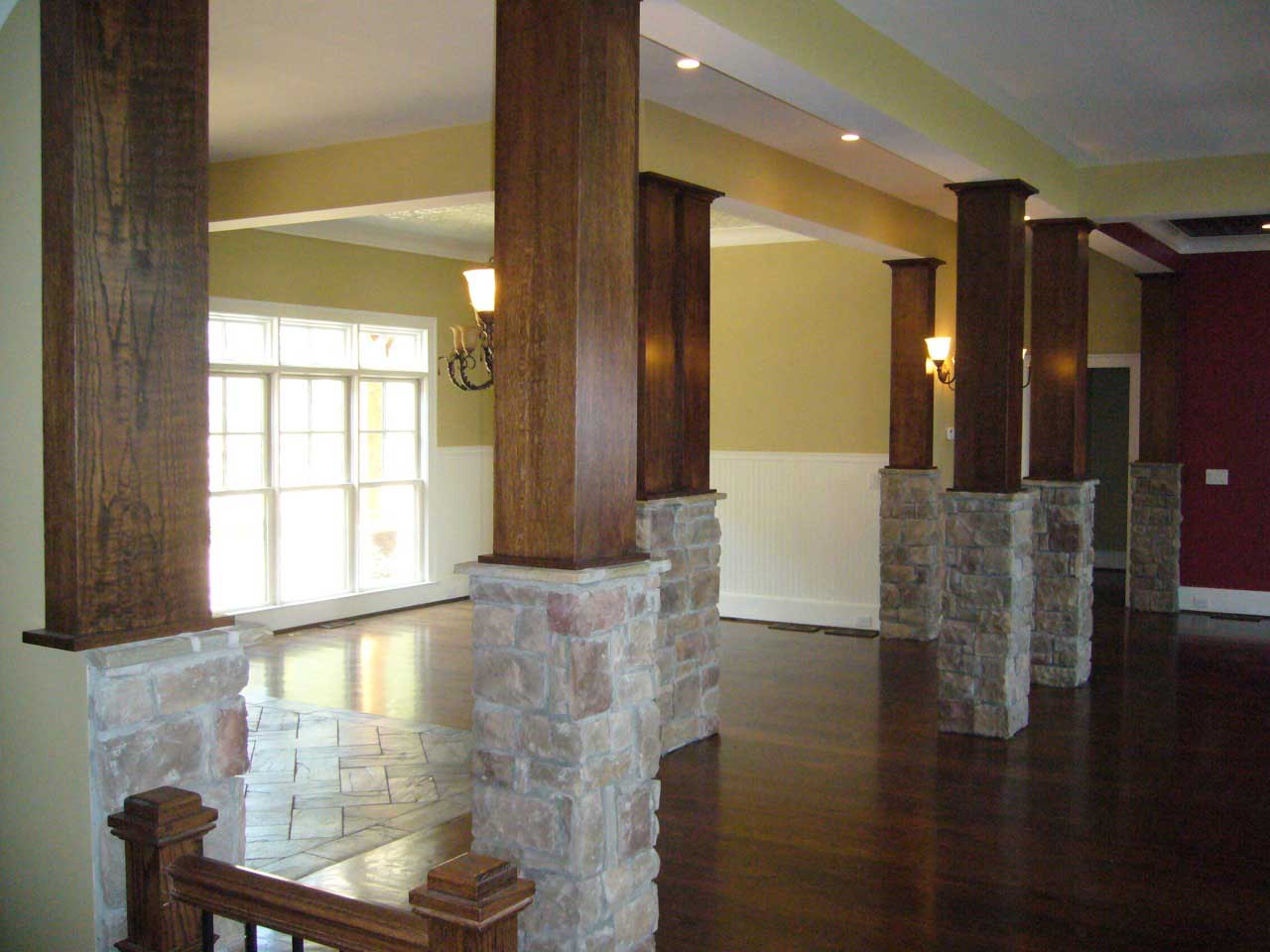 A decorative block of wood often used at the bottom of door casings where the baseboard meets the door.

A space-saving door style that slides into the wall rather than swinging open into a room or hallway.

A framed wall that extends a shorter foundation wall to full height. These are commonly used on split entry homes where the foundation walls are 3 to 4 feet in height or when a home’s foundation is stepped because of lot conditions. 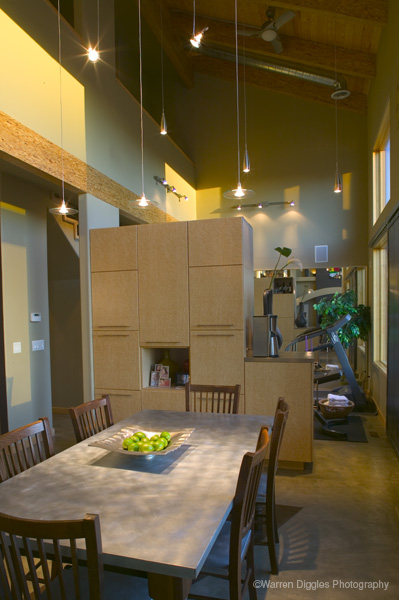 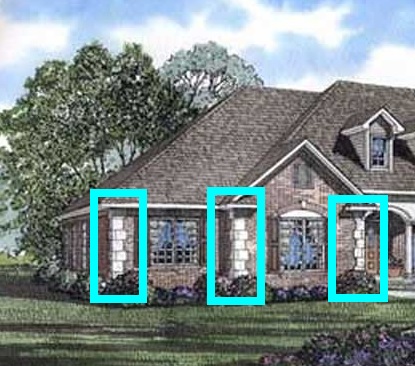 An inclined roof framing member extending from the eave to the ridge of the home. The rafters support the exterior roof surface and snow loads. 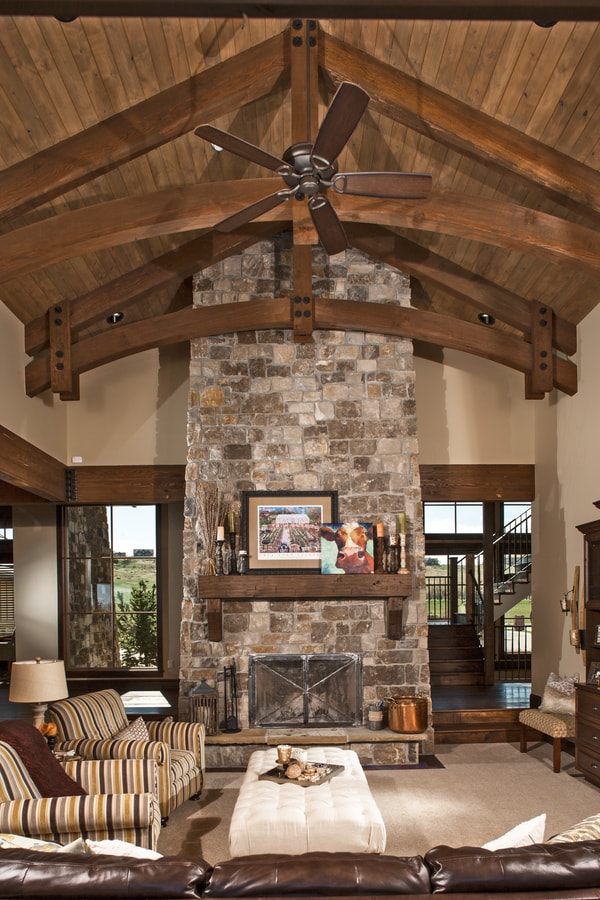 Reinforcing bar that is used to strengthen concrete structures.

The highest part of a roof where the sloped roof planes meet. Sometimes referred to as the peak.

A joist at the outer edge of a floor platform to which the floor joist ends meet.

A saltbox roof is a type of gable roof where the ridge (or peak) is off-center because the roof's pitch is different on each of the two roof sections.

The outer cover of a framed wall or roof section. We take a closer look at the top 5 exterior wall sheathing options for a new home build in this post.

A foundation in which a concrete slab foundation floor creates the first floor of a home. A slab foundation can be built with a stem wall and footings around its edge or as a monolithic slab having no stem wall or footings created at its edges. We discuss the advantages and disadvantages of slab versus crawlspace versus basement foundations in this post.

A door composed of two sections. One section is active, sliding over the other section when opened. 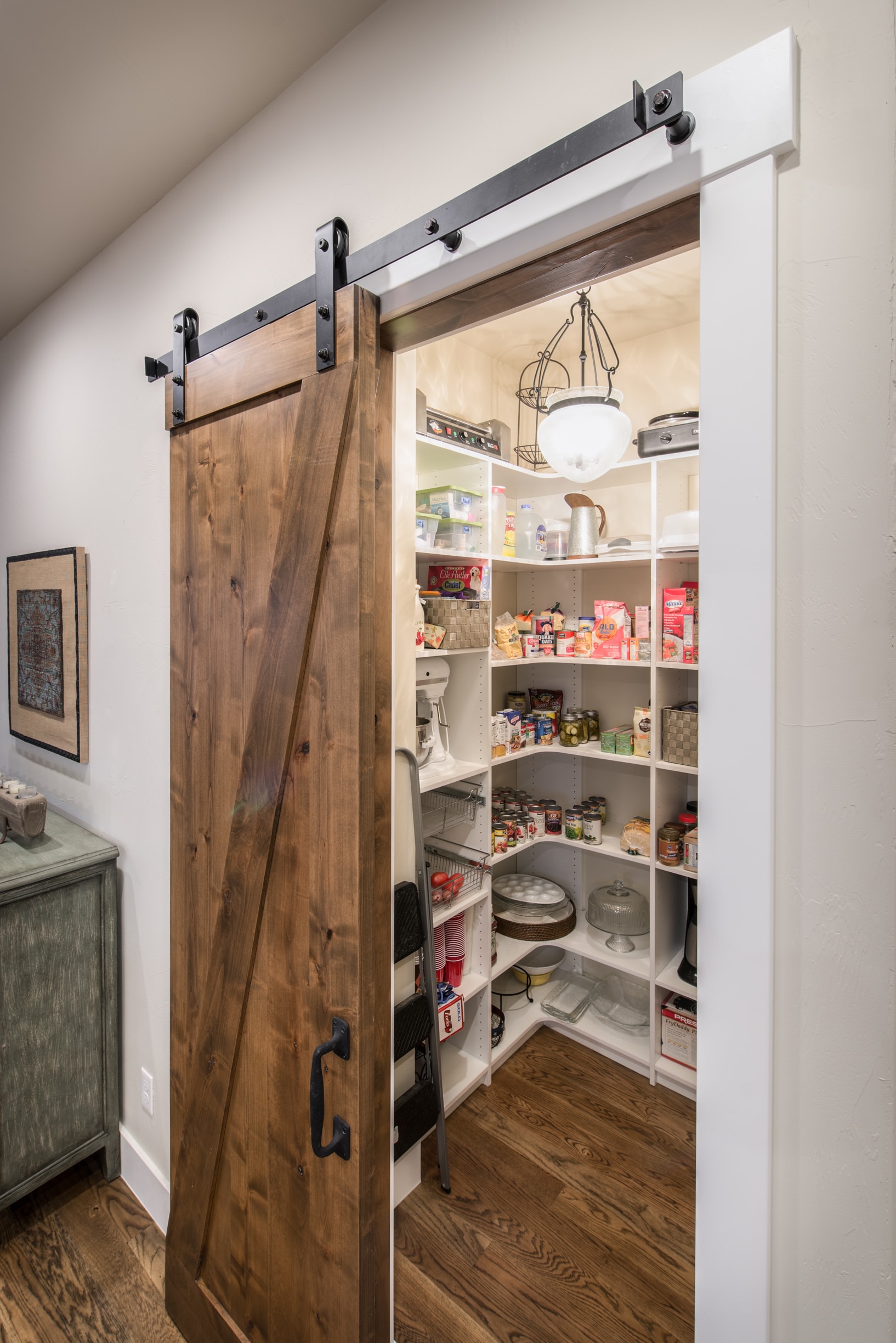 A boxed area usually built above cabinets to fill the gap between the cabinet top and the ceiling.

A house in which various sections of the floor plan have different floor and ceilings heights. The split-level home design gained significant popularity after WWII, given its efficient layout. 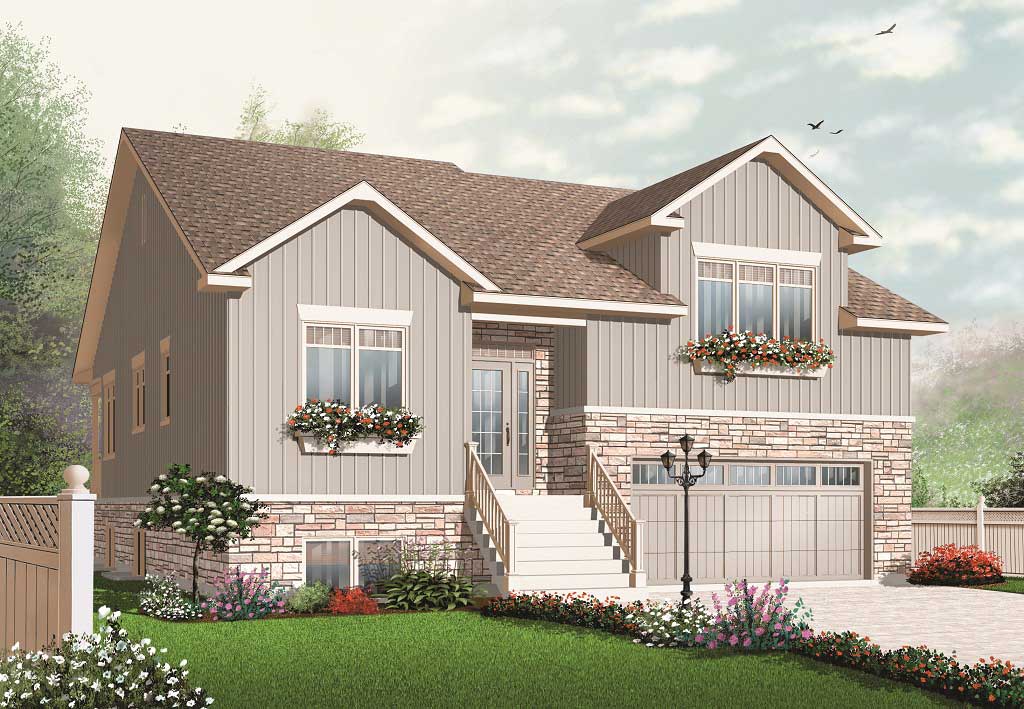 The vertical face of a step in a flight of stairs. 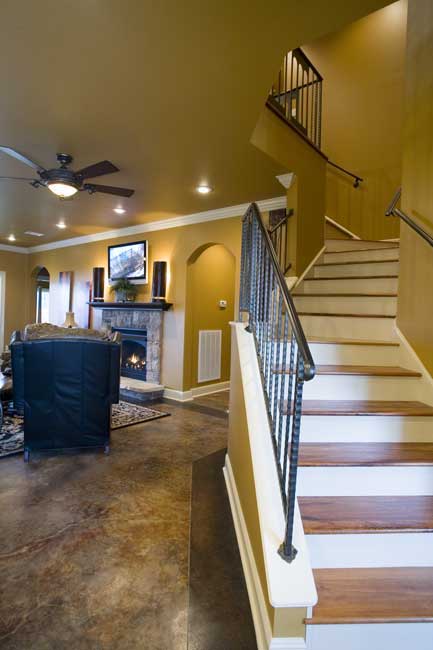 A foundation wall section generally made of concrete below the framed section and above the footing.

A vertical face frame member of a cabinet between two doors.

The angled member of a stair section that supports the risers and treads. 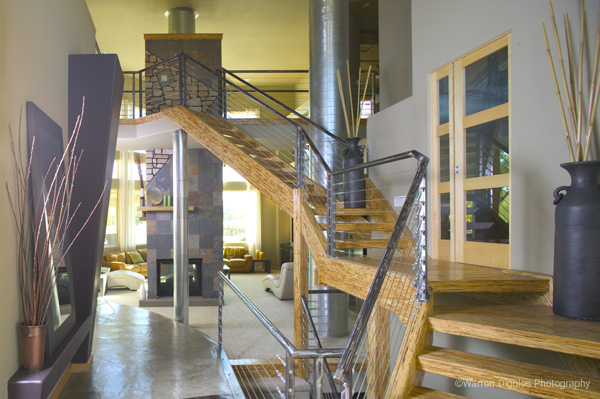 Sheet metal placed where the wood framing members are attached to the concrete foundation used to prevent insects from getting into the wood-framed structure.

A horizontal framing member placed at the top of the wall studs to carry the ceiling joists or rafters.

A window that is placed above a doorway. 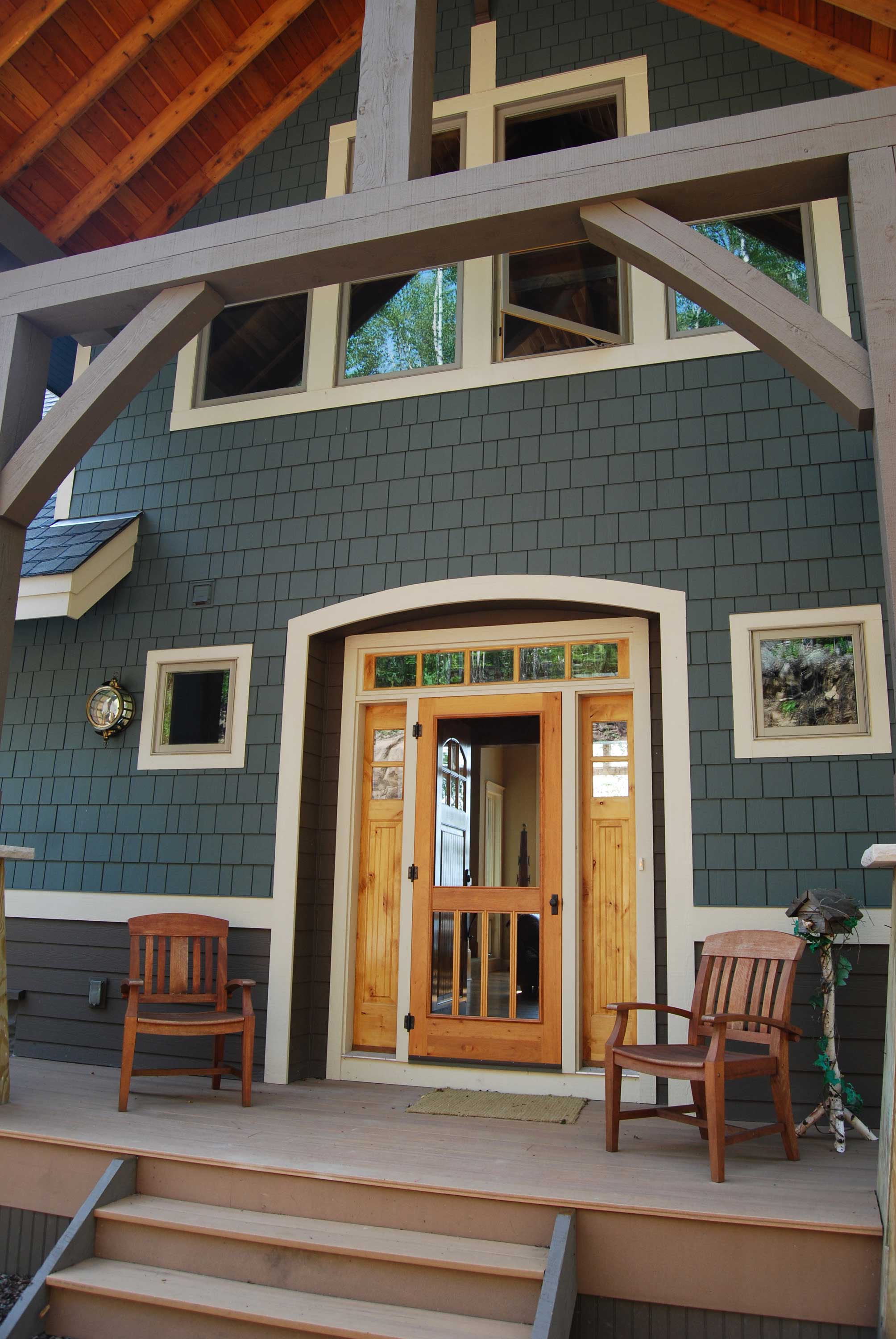 A vertical framing member that supports a window or door header on its ends.

An engineered framing member used for bridging spans and supporting loads like a roof or floor. Trusses are generally triangular in shape with cross members or webbing on the inside.

The horizontal bottom member of a truss that creates the ceiling on the interior of a structure.

Sheet metal flashing that is shaped to contour the valley of a roof where two roof sections meet.

A wall cabinet is sometimes called an overhead cabinet. Wall cabinets are typically hung on the wall above a base cabinet and do not have a toe-kick or countertop. 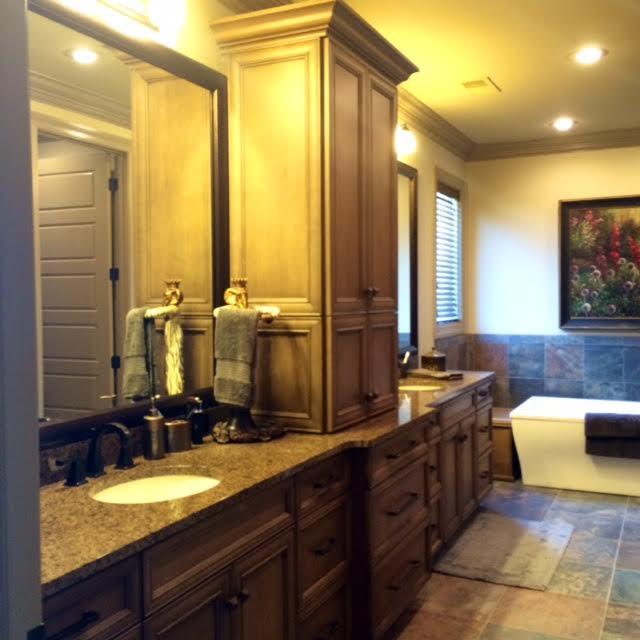 Webbing is made up of several truss members that connect the top and bottom chords filling the truss structure.

The bottom horizontal trim member at the base of a window projecting outward. 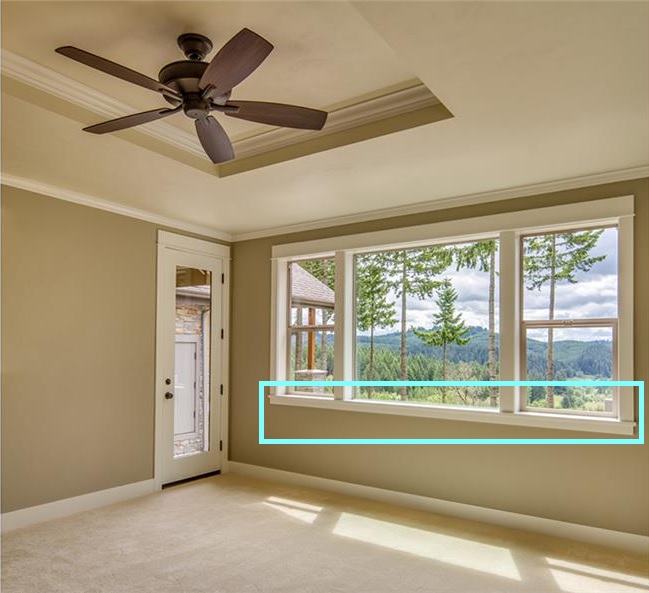