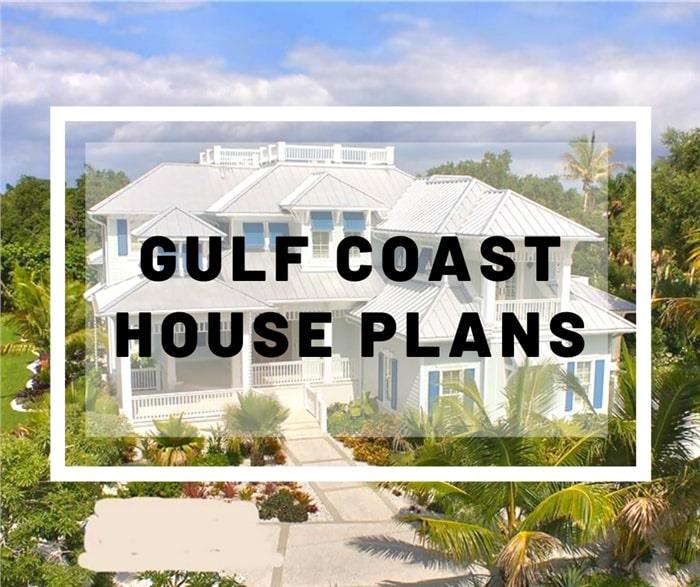 Looking for a Home with Southern Charm and Casual Living? Look no Further

Spanning more than 1,600 miles of coastline along the Gulf of Mexico, the Gulf Coast Region of the U.S. encompasses Texas, Louisiana, Mississippi, Alabama, and Florida. Often described as the “Third Coast,” this area at the southern tip of the country features the Everglades, pristine beaches, bays, and lagoons. And it has a rich history that includes an intriguing and varied architectural heritage. 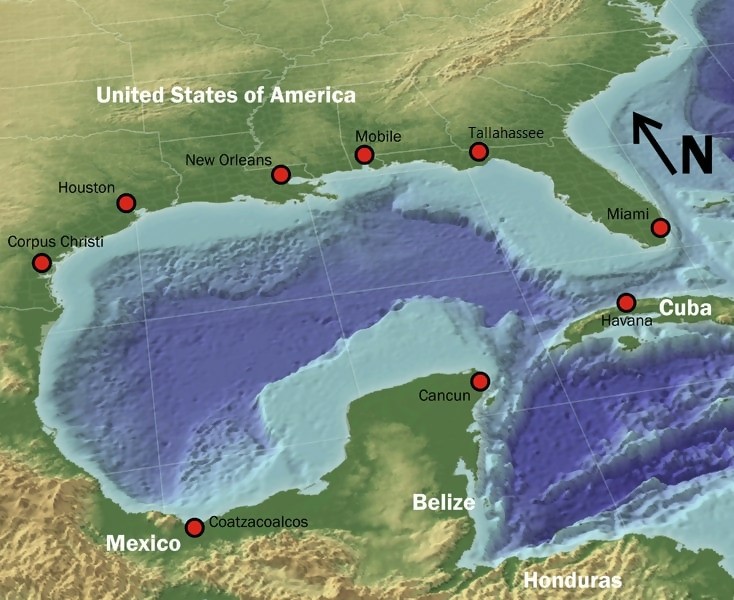 This map shows the Gulf of Mexico and the five states along the coastline that make up the Gulf Coast Region of the U.S. The “Third Coast” includes Texas, Louisiana, Mississippi, Alabama, and Florida (image credit: Public Domain).

From Brownsville (Texas) to New Orleans, Biloxi, Mobile, Tampa, and all the way down to Key West, the Gulf Coast Region is filled with charming and sophisticated homes that are representative of the area’s cultural and historic past. One may find folk houses, Creole cottages, elegant Southern Colonials and plantation style homes, Victorians, Arts and Crafts, contemporary residences, modest and luxurious oceanfront Florida style homes, and impressive mansions. 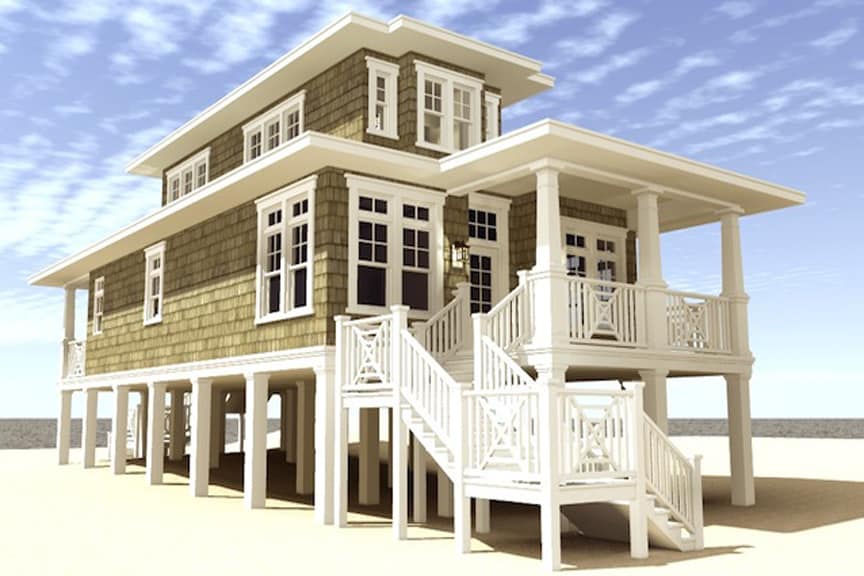 From the front and rear porches to the shingles and white trim, this gorgeous 2-story Beachfront home is a picture of perfection. The home includes 3 bedrooms, 2 baths, and a spacious living area (Plan #116-1085).

This diversity in style is a mix of the traditions brought by the European, Latin American, and Caribbean settlers; and the region’s sub-tropical environment. So don’t get stuck on the images of sprawling Southern plantations and the casual feel of oceanfront cottages. Take some time and explore the many residential architectural forms of the Gulf Coast Region with us.

What Youll Find There

Here’s a look at the house styles that define the Gulf Coast Region.

“Transported” by the French-speaking immigrants from Nova Scotia in the late 18th century (1764-1765), this architectural style was developed in New Orleans and found throughout the Gulf Coast region. It combines French and Spanish Colonial forms and Caribbean influences that addressed the demands of the hot, humid climate of the area. Variations within the Creole Cottage category – such as the Gulf Coast Cottage and the Creole Townhouse – also exist. 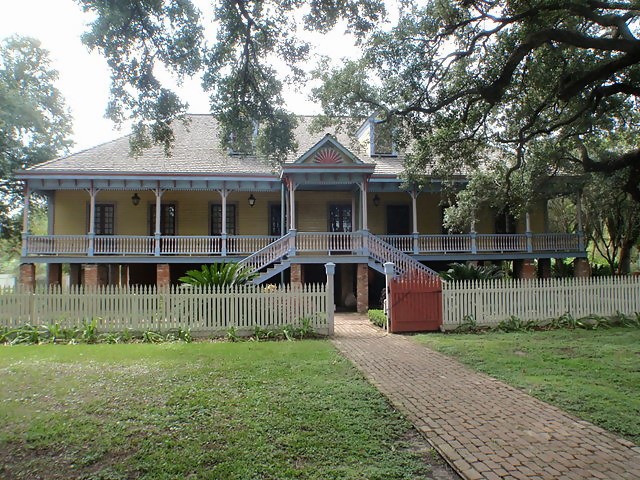 Registered with the National Register of Historic Places, the Laura Plantation shown above is a fine example of early-19th Century Acadian-Creole architecture. Typical of the homes on the Gulf Coast, it features the signature rectangular shape, has a fairly steep hip roof, and is raised off the ground with brick piers supporting the columns on the front porch (photo credit: Laura Plantation House Front by ZeWrestler under license CC BY-SA 3.0).

Although most Acadian-Creole homes are usually rectangular-shaped one-story structures, they can also come with a half-story. They are raised off the ground and have thick brick piers that support the columns on the front porch. Other features include: 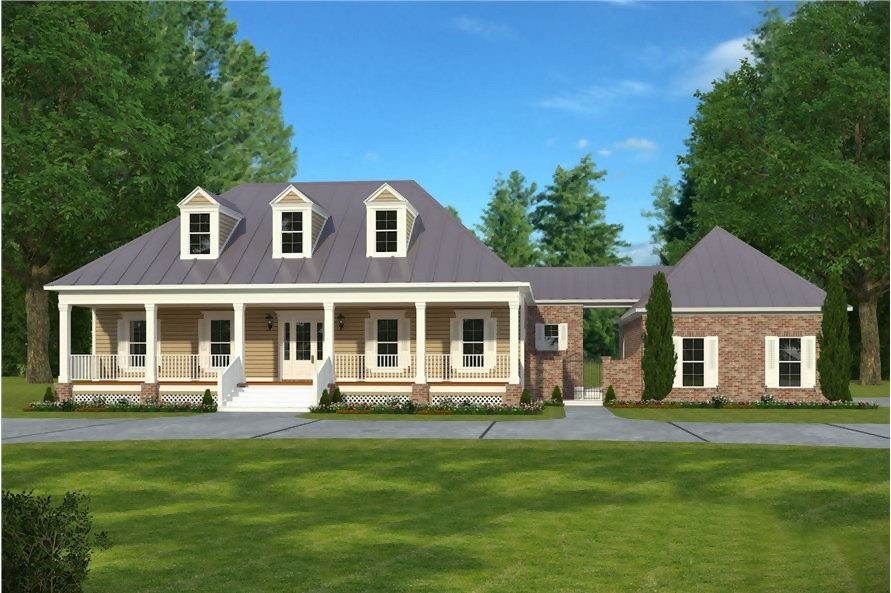 Creole Townhouses, which comprise a large portion of the French Quarter, are considered the most iconic pieces of architecture in New Orleans. Mostly made of wood, they were built after the Great New Orleans Fire of 1788 through the mid-19th century. Later structures had brick or stucco facades, courtyards, arcades, and cast-iron balconies. They usually have steeply pitched roofs with parapets, side gables, and dormers.

An architectural style that is a major part of the culture of the South, the shotgun was brought to the Louisiana Bayou by West African and Haitian settlers in the 1800s. Typically, a one-story structure with a narrow layout – about 12 feet wide and two to four rooms deep – the shotgun’s rooms are lined up one behind the other. Each room opens into the other with only partial walls between the rooms. (Read more about the Shotgun Style at The Shotgun House Finds Its Way Back into the Architectural Landscape.) 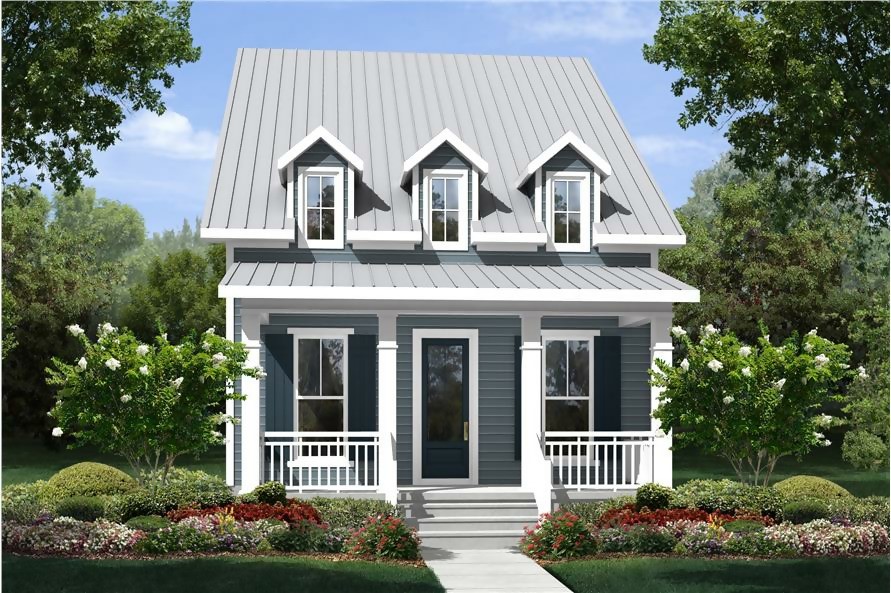 This striking 2-story Cottage style home with 2172 sq. ft. of living space has 10-ft. ceilings throughout the first level. Perfect for a narrow lot, the home measures just 24 feet wide and 93 feet deep but includes 4 bedrooms and 2.5 baths. The Great Room features a fireplace on one side and a decorative staircase to the second floor on the opposite side (Plan #142-1122).

In the Gulf Coast area (and in most parts of the country), the style is a “dressed up” folk cottage with some of the trimmings of Victorian architecture. It borrowed elements from the Carpenter or Rural Gothic form – such as steeply pitched roofs and gables, fancy scrollwork, and carved porch railings. Pattern books were the source of these early folk Victorian designs.  And, with the development of balloon framing, it was possible to create complicated house shapes.

The Gulf Coast Victorian style is mostly simple and restrained in its decorative touches – except for the porch. Some of the defining features of the style are

Near the end of the 19th century, the whimsical and quirky Queen Anne style took off not only on the Gulf Coast but across the country. Queen Anne homes have prominent gables; turrets; bay and oriel windows; porches complete with spindlework, columns, and brackets; and a mix of siding ranging from patterned shingle, brick, and clapboard to stucco and half-timbering. The homes are also painted in bold, vibrant colors. (Learn more about the Queen Anne style.) 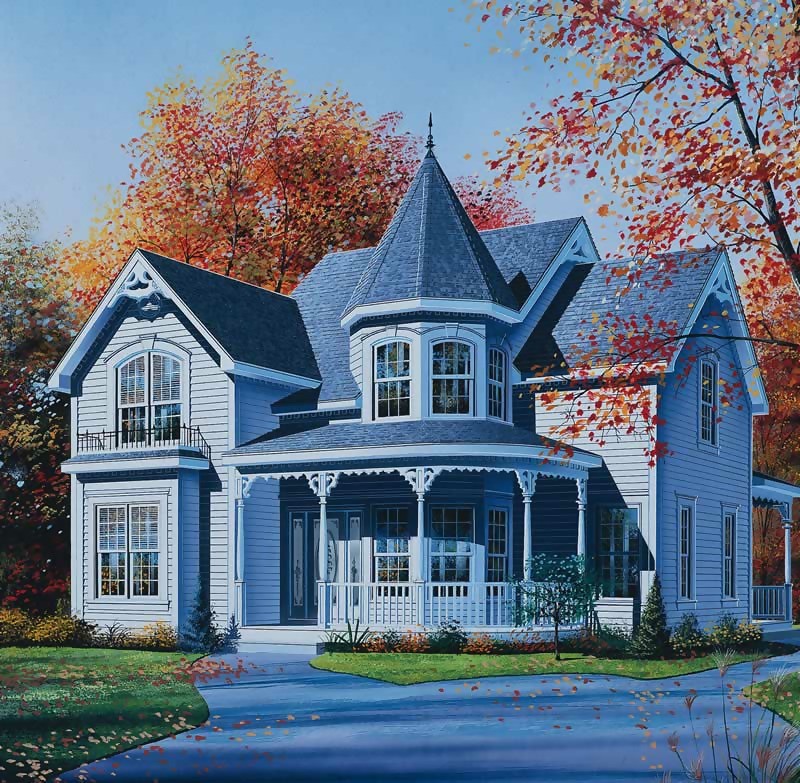 This delightful 2-story, 2,160-sq.-ft. Victorian home exhibits several fanciful features of the style, such as the gable roofline, cut woodwork, decorative trim on the front porch, brackets that attach the trim to the porch posts, and a turret. The residence has 3 bedrooms, 1.5 baths, and a covered rear patio that mirrors the décor accents of the front porch (Plan #126-1414).

Typical of any section of the country colonized by the French and Spanish, the Gulf Coast also features classical styles based on the Colonial, Federal, Georgian, and Greek Revival forms. Residences in the Gulf Coast Classical style usually start as a simple one or two-story structures. Side wings and porches are added to create a more complex facade.

Some characteristics include a symmetrical exterior facade, gable or a hip roof with dormers, multi-pane windows, short covered front porch, and simplified versions of classic details like Ionic and Corinthian columns. (Read more about the Georgian Style.)

Influenced by European immigrants who settled in the Northern and Southern colonies in the early 17th century, Southern Colonial is a large Early American style two-or three-story frame house with a characteristic colonnade extending across the front.

How can you identify a Southern Colonial home? Here are several elements that set it apart from the rest of the neighborhood: 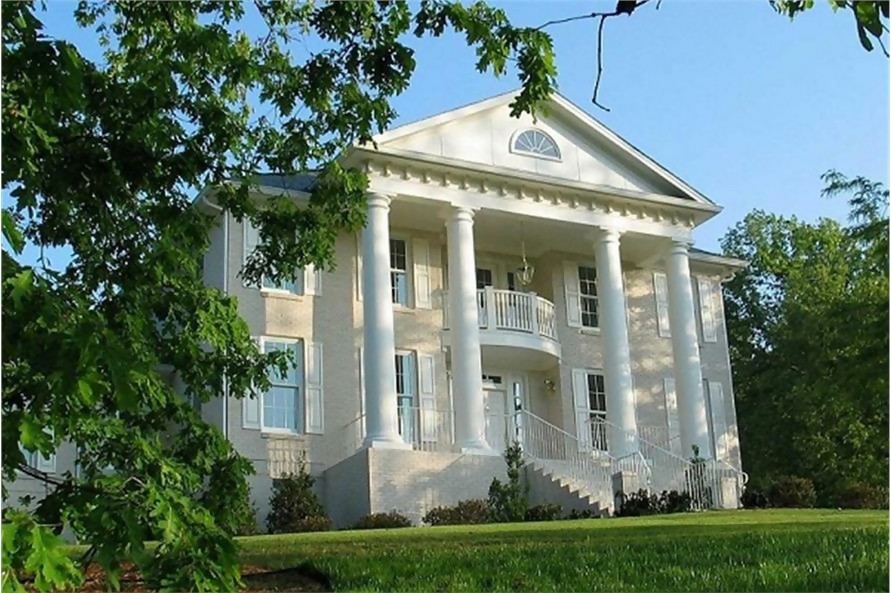 Symmetry and elegance define this stately 2-story Southern Colonial style home comes with 4 bedrooms, 3.5 baths, a study, dining room, living room, and master suite on the main floor spread out over 3,270 sq. ft. of space. The gorgeous home has the typical features of the Southern Colonial style: a main door at the center flanked by the same number of windows with shutters on each side (even the Juliet balcony has the same symmetrical setup), a short covered porch, and 4 massive white columns that form the exterior colonnade (Plan #178-1034).

Antebellum / Southern Plantation Style Homes usually bring images of Gone with the Wind and Tara, the fictional elegant mansion that has been connected to Southern architecture. These homes were built in the South before the American Civil War (1861-1865) – therefore “antebellum” (before the war in Latin).

While a number of the homes were ruined during the Civil War and by hurricanes like Katrina, many of them have been restored. Among the most famous Plantation Homes on the Gulf Coast are Oak Alley Plantation in Vacherie, Louisiana; Nottoway Plantation, outside of Baton Rouge, Louisiana; Longwood Estate, Stanton Hall, and Rosalie Mansion in Natchez, Mississippi; the Goodman-LeGrand House in Tyler, Texas; and The Grove Plantation in Tallahassee, Florida. 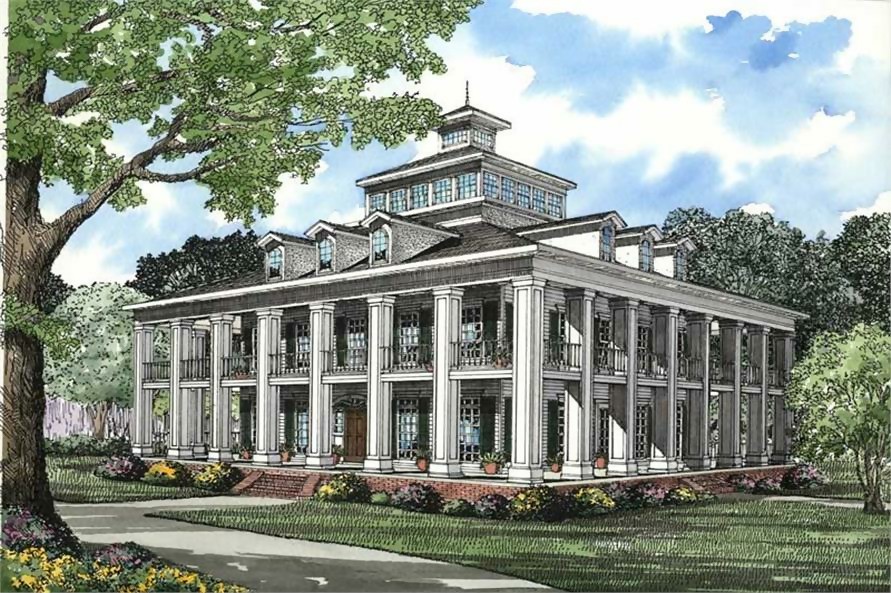 This majestic  3-story, 5-bedroom, 5.5-bath Southern Plantation style home with more than 7,000 sq. ft. of space is the perfect illustration of the architectural style. Symmetry and balance with the boxed columns, hip roof with dormers, and wraparound porch. Inside the open floor design is a center-hall foyer flanked by the living room and dining room, a study, and a Great Room. Private living spaces are located on the second floor, including a master suite with its own fireplace and his and her closets. The observatory, along with a hobby room and a full bath, is on the third floor (Plan #153-1187).

The movement began in England in the late 19th century as a protest against the elaborate Victorian design. In contrast, the Arts and Crafts style promoted simplicity, good craftsmanship, and the use of natural materials. The U.S. movement was led by Gustav Stickley, publisher of The Craftsman, an illustrated magazine that promoted the principles of Arts and Crafts architecture in America.

Throughout the Gulf Coast region, there are many small Craftsman cottages that have been adapted to local traditions and building types. Here are some of the features of Gulf Coast Arts and Crafts homes: 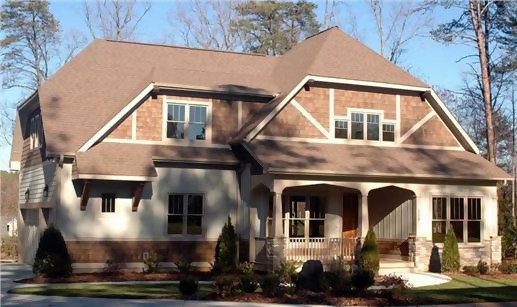 Simplicity is beauty as illustrated by the clean, elegant lines of this 2-story 4-bedroom, 3-bath Arts and Crafts home. It has the signature hip roof, rock-stone-and-wood exterior facade, a covered front porch, and a rear deck (Plan #127-1000).

In addition to all the historic and traditional house forms, there are spectacular coastal homes from South Padre Island, Texas, to the Emerald Coast of Florida. After all, it’s the Gulf Coast, with miles and miles of amazing beaches, bays, inlets, and lagoons.

In general, beachfront homes usually have a raised main level built on pier or pile foundations to prevent problems with floodwaters or high tides. They can be one-story or multi-level structures with covered entryways, wide stacked porches, decks, and balconies. For the exterior, stucco, concrete, and vinyl or wood are some of the siding materials used and metal or asphalt shingles are used for roofs. 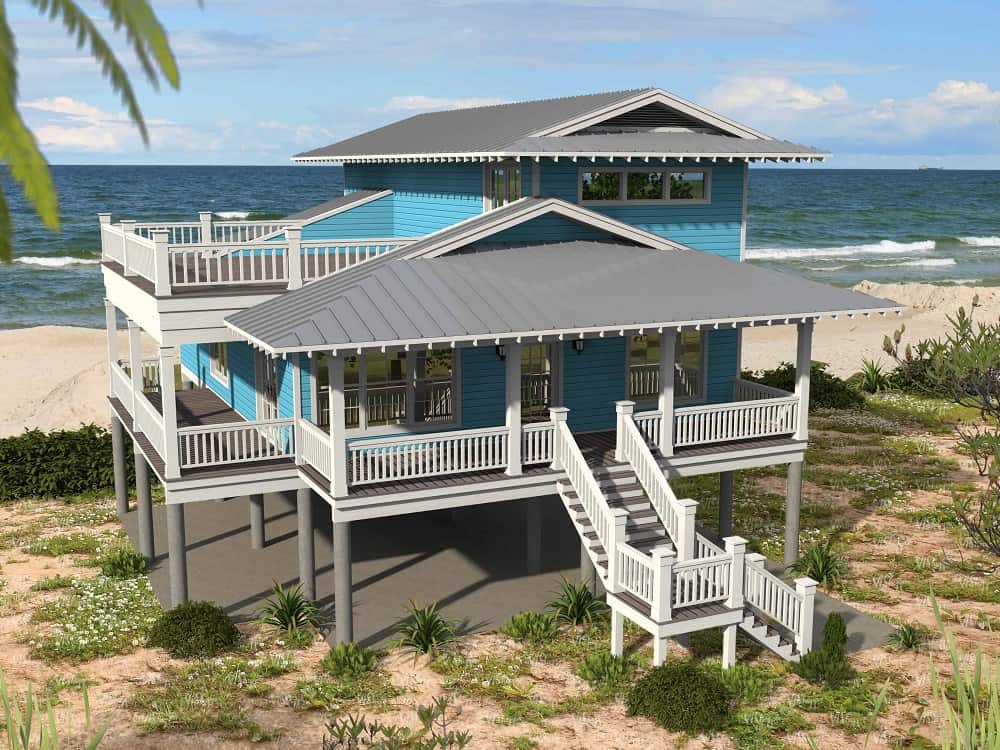 One has to love this attractive beachfront home! The 3-bedroom, 4-bath residence has a raised main level, covered front porch, side porch, multiple decks, and lots of windows to take in the wonderful views (Plan #196-1148).

Other popular house plans that are part of the residential architecture in the Gulf Coast Region include Spanish-Mediterranean, Bungalow, Tidewater or Lowcountry, and Ranch styles – all adapted to the climate and topography of the area.