Lowcountry Architecture: A Mix of the Simple, Functional, and Elegant 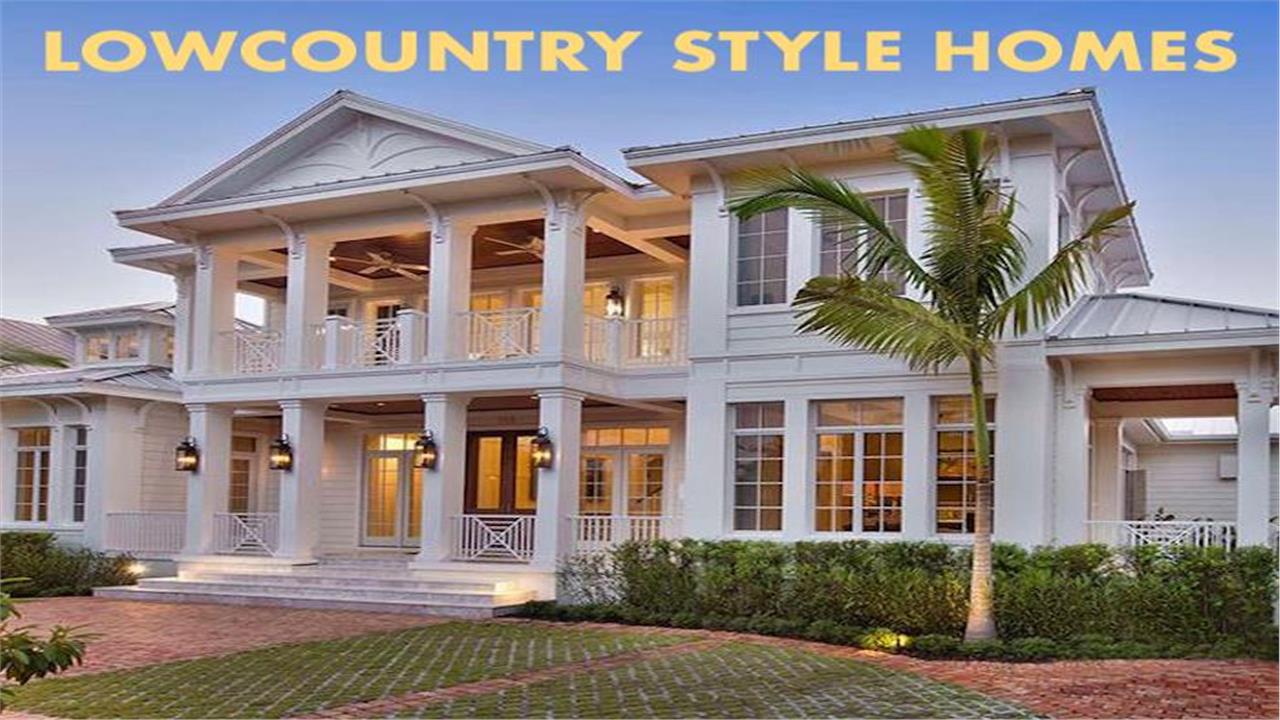 On a 200-mile expanse along the coast of South Carolina and Georgia is the Lowcountry, or Low Country, region – so-called because of its low elevation. Stretching from Charleston to Savannah, this geographic area is a favorite with tourists as well as people who love to live in a warm climate and slow-paced environment. Imagine seaside resorts, stunning landscapes, cultural sites, and you have a vision of this region that is steeped in natural beauty and history.

One of the Lowcountry’s characteristic elements is its architecture, which appeared in its most primitive form in 1670 when the first British settlement was established in South Carolina. 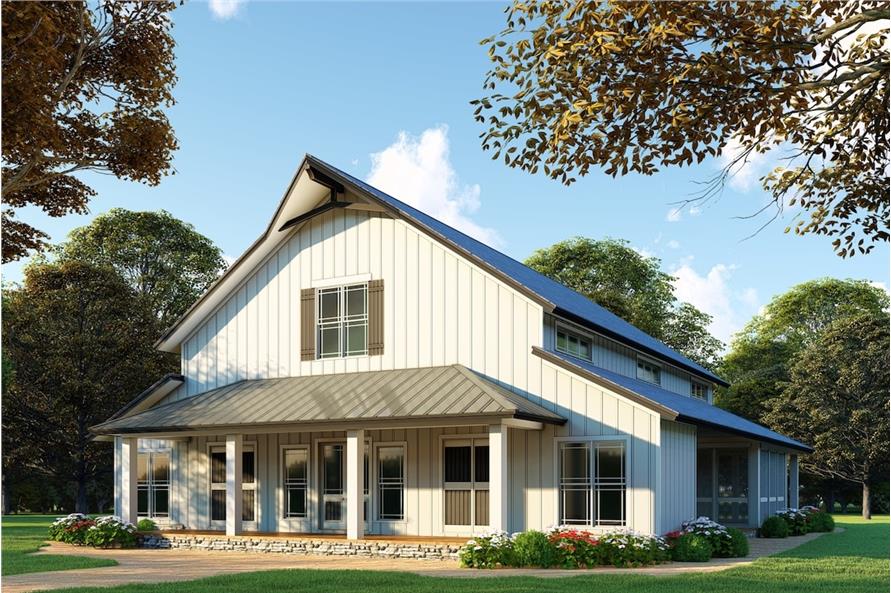 What began as simple one-room cottages in the 1700s have evolved into comfortable, elegant, practical, and spacious homes whose architectural design has been adapted to the sub-tropical climate of the American South – from South Carolina to Georgia, Florida, and beyond. Let’s take a look at the key characteristics of Lowcountry style homes.

With the region’s high tide levels and hurricane flooding, most homes – especially those on beachfront properties – have an elevated first floor raised on pilings (piers) or above crawlspaces. 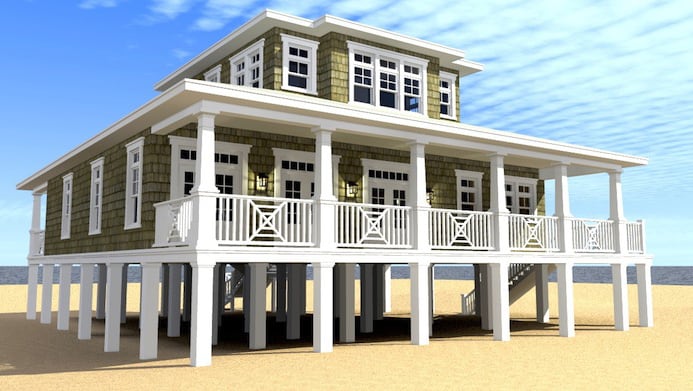 For a sheltered and shady area, Lowcountry homes are constructed with hip roofs that extend over wide covered front porches supported by columns or pillars. With the porch protected from the elements, family and friends have a place to relax and socialize. 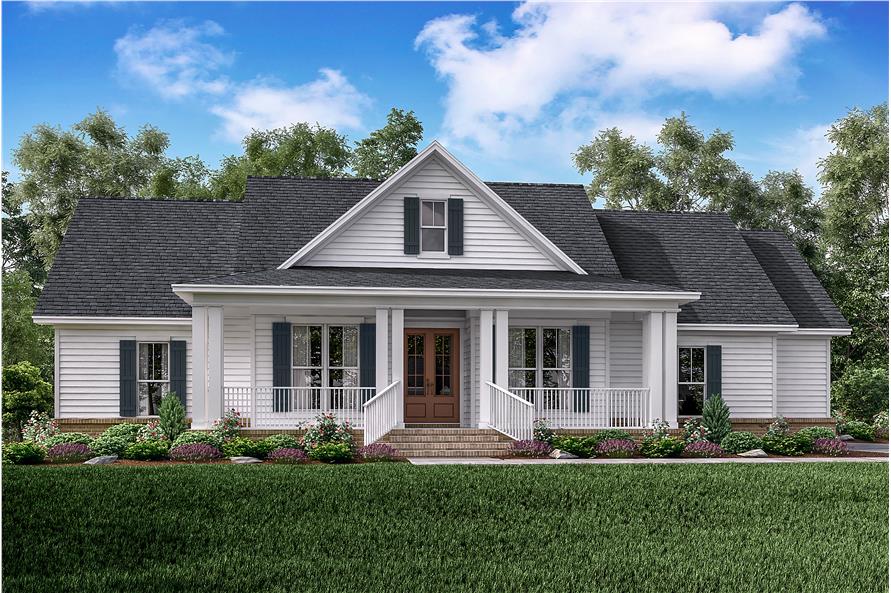 Check out the hip roof of this charming 1-story, 3-bedroom, 2.5-bath Farmhouse style home. With the roof providing a “cover” for the cozy front porch, family and friends can sit back and enjoy the natural surroundings (Plan #142-1183).

A unique feature of American architecture and the center of a family’s activities, the front porch is almost always present in Country house plans, as well as Farmhouse, Cottage, Plantation, and Southern style home plans, to name a few. Porches can be wide or narrow, one story or two, or wraparound that extends around the home. 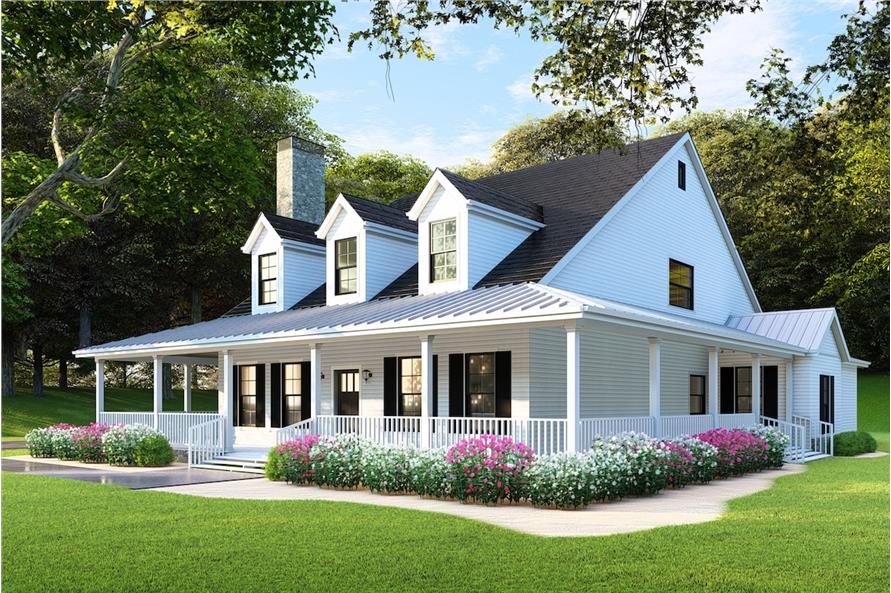 Bask in the bucolic charm of this modern 1.5-story, 4-bedroom, 2.5-bath home with its unique Southern appeal. Complete with a covered wraparound porch, large windows, and lush natural surroundings, the home truly represents the essence of Lowcountry architecture (Plan #153-1940).

In some of the historic Lowcountry homes around Charleston and Savannah – like the Cuthbert House and the Rhett House, which have been restored and refurbished – the most visible features are the double-stacked front porches shaded by live oaks.

On these spacious and airy porches, families hosted get-togethers with their friends and neighbors, enjoyed afternoon teas and casual dining, or just sat around to relax.

Originally built around 1790 to 1810 for the wealthy Cuthbert Family, the mansion features the quintessential double-stacked front porch of Lowcountry homes. Abandoned by the family when the Union Army sieged Beaufort, SC in 1861, it was claimed by the Union Army leader General Rufus Saxton. 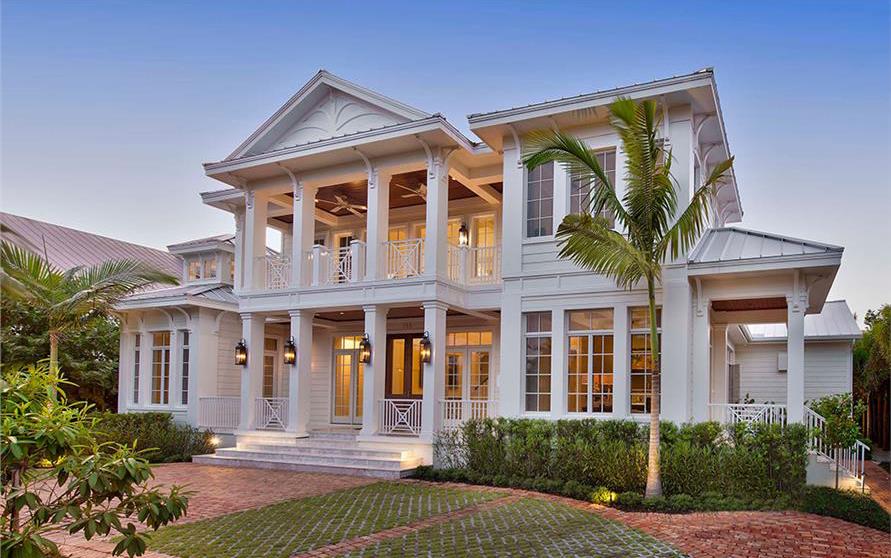 Since the first Lowcountry homes were built long before air-conditioning, their features were designed to provide maximum ventilation and airflow to keep residents as cool as possible. And nothing was more efficient than double-hung windows for that purpose. These tall windows can be opened at the top to allow hot air to escape. Open the bottom window, and you let fresh, cool air to get into the home.

In the first Lowcountry homes, shutters were a protective measure against gusty winds and stormy weather. Today, while you can still find shutters in Lowcountry plans, they primarily serve as decorative accents. 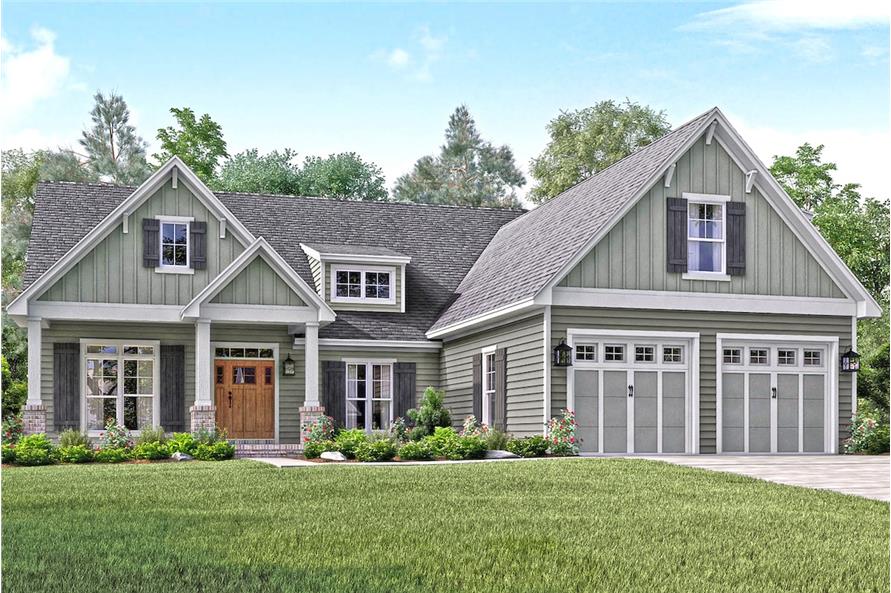 This 3-bedroom, 2.5-bath Country Craftsman home spread over 2,003 sq. ft. of living space comes with some inviting Southern touches. There are large double-hung windows with decorative shutters and an inviting covered front porch that welcomes visitors into the home (Plan #142-1158).

In architecture, a transom is described as a “horizontal structural beam or bar, or a crosspiece separating a door from a window above it. Transom or transom window is also the customary word used for a transom light, the window over this crosspiece.” In Lowcountry plans, the transom window can be opened to allow more airflow out of and natural light into the residence. 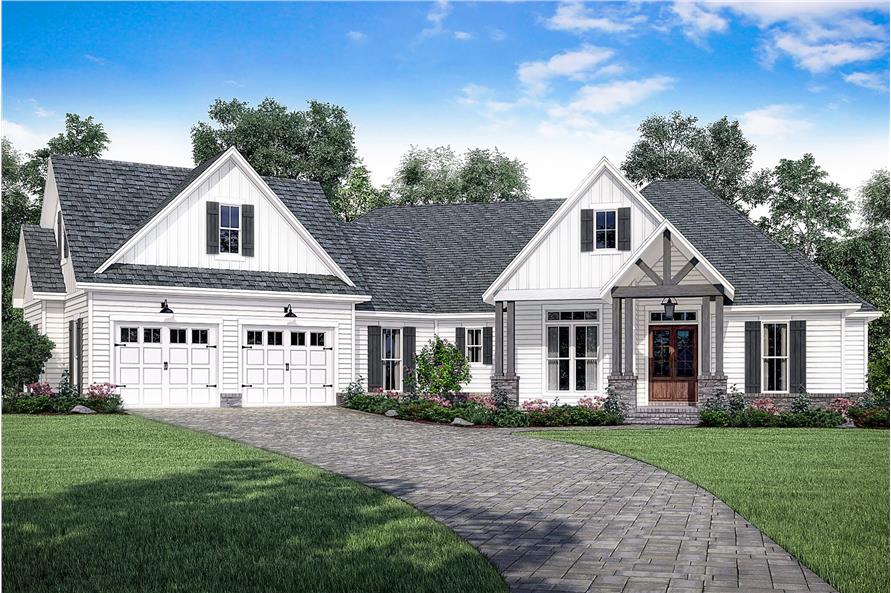 This attractive 1-story contemporary, transitional Farmhouse with 3 bedrooms and 2.5 baths becomes more appealing with its Lowcountry design touches. The front porch has exposed beams, matching columns mounted on pedestals, and transom windows over the front door and the large window just to its left (Plan #142-1186).

Part of the pleasure of sitting on the covered front porch of a Lowcountry home is the calming view of shade trees, shrubbery, and lush gardens with colorful blooms and plants. 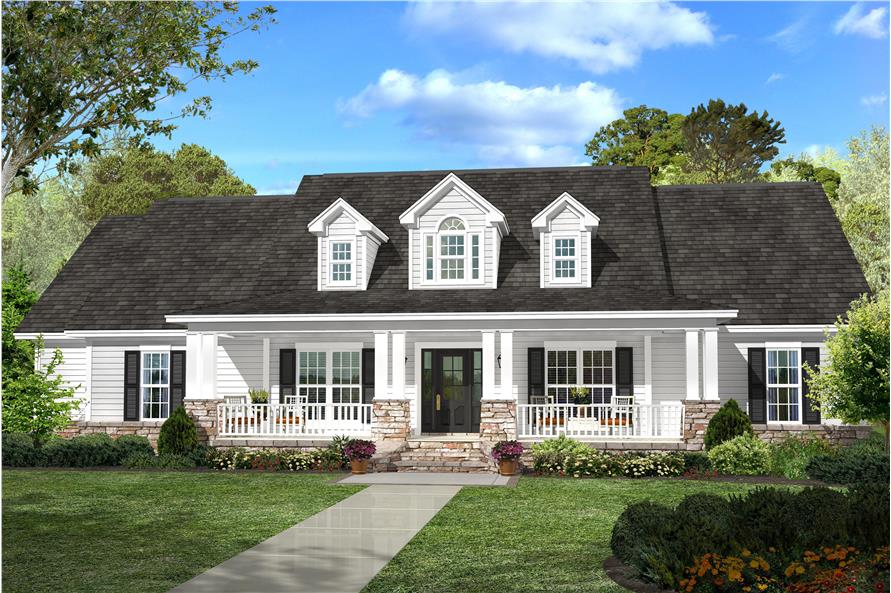 Sit back and enjoy the view from the comfort of the covered front porch of this magnificent Southern style home. Inside the 1-story 2,400-sq.-ft. home are 4 large bedrooms, 2.5 baths and a Great Room with a fireplace and stunning views of the backyard (Plan #142-1131).

Like the large double-hung windows, high ceilings helped cool the interiors by taking advantage of a property of hot air: it rises. With a high ceiling, the hotter air sits above the residents, making it feel cooler in the living area. In older Lowcountry homes, these ceilings were about 10 to 14 feet in height and had electric or rope-powered fans, and this trend continues today.

Inside a 2-story, 3-bedroom, 2-bath Vacation style home is this fabulous Great Room with high vaulted ceilings and walls painted in soft gray and yellow tones typical of the Lowcountry design. The high ceiling is also common in Lowcountry architecture, allowing the hot air to rise and keep the lower portion of the room cooler (Plan #168-1001).

In 1670 when the British established the first permanent settlement in South Carolina, they brought with them the modest one-room cottage design of English homes – a model that worked in the tidewater regions of Virginia and Maryland. Small cottage house plans are still popular in the region. Throughout the late 1600s and early 1700s, colonists from France, the Netherlands, Germany, and other European countries settled in Charleston and other parts of the state. They also brought with them architectural ideas from their native lands.

But the hot and humid conditions in the Lowcountry combined with the lack of building materials called for practical adjustments in their simple home designs.

One of the first modifications was the construction of homes on piers or above crawlspaces to avoid coastal flooding and to allow air to circulate underneath the structures. Then, the settlers started installing large double-hung windows and wide wraparound porches that “faced south, shading the interior from the blistering summer sun during the day.”

High ceilings inside the homes also helped with the airflow. 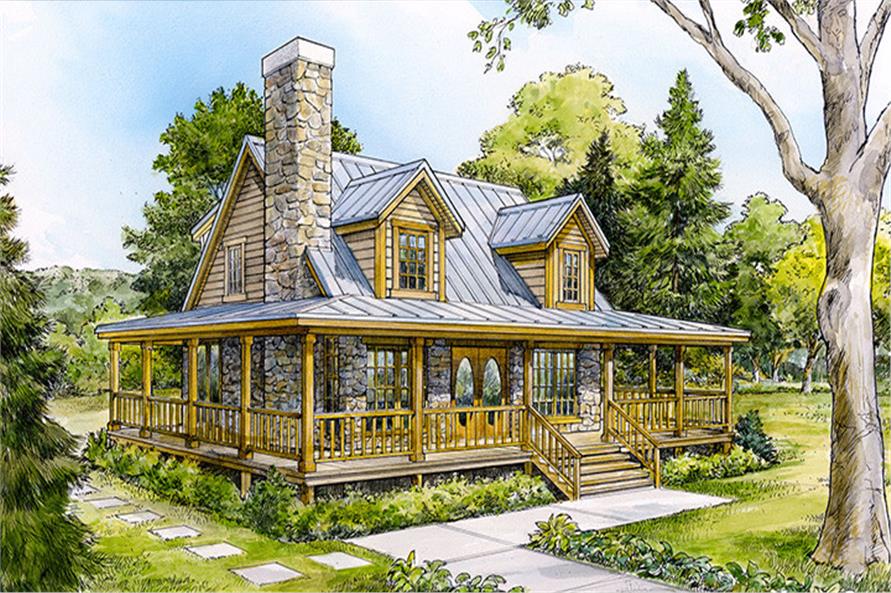 While the English were the major influence and the originators of the Lowcountry architectural style, other facets of the design came from other countries.

For example, porch columns were inspired by design concepts of Italian architect Andrea Palladio whose work was “strongly based on the symmetry, perspective, and values of the formal classical temple architecture of the Ancient Greeks and Romans.” Palladian architecture flourished in England and other European countries in the 18th century. The large columns of Lowcountry porches were not only decorative accents, but they were also structurally necessary – since they supported the roof.

The French Huguenot settlers who remained loyal to England introduced and incorporated French doors into Lowcountry design. Primarily used for access to balconies, the original Lowcountry version was made of wood and “contained glass for its full length to allow maximum exposure to natural light….”

However, the Barbados/Bermuda influence had the most colorful impact on Lowcountry architecture. Consider the pastel interiors – light shades of yellow, green, blue, pink. Both islands were British colonies in the 1600s, with Barbados being the predominant trading route in the West Indies that took English traders and sailors to South Carolina.

From these islands came wicker, rattan, and wicker furniture. In addition, the Gullah – slaves from western Africa who came through Barbados – added their own culture to Lowcountry architecture with blue-colored porch ceilings. The blue color of the ceilings is known as “haint blue,” and ceilings, doors, shutters, and other exterior elements might be painted with this haint blue to dispel evil spirits from the home and protect its inhabitants. It was thought that the spirits would see the blue color as sky, passing through it and away, or as water and stay away from it.

While there are modern influences and improvements on Lowcountry design today – such as more sophisticated outdoor living spaces and other luxury features – the essence of a beautifully designed Lowcountry home remains the same: simple, practical, and elegant. 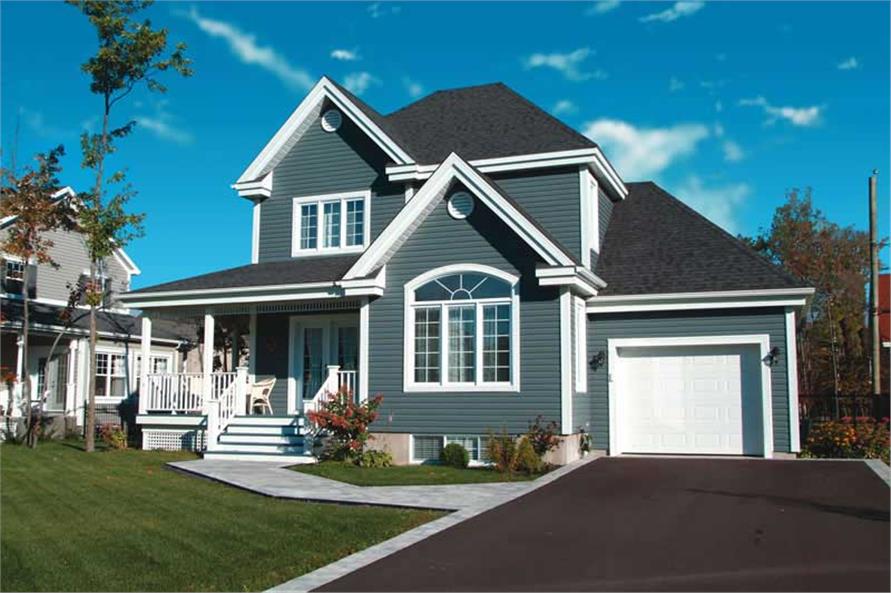 The eye-catching blue-painted exterior of this 2-story, 3-bedroom, 2-bath Country home adds to its charm and curb appeal. In Lowcountry style homes influenced by the culture of Barbados, porch ceilings, window frames, and doors were painted a blue-green shade – lighter and paler than this siding – called "haint blue" to ward off evil spirits (Plan# 126-1771).

If you want comfort, elegance, and charm in your dream home, you can’t go wrong with the Lowcountry style! 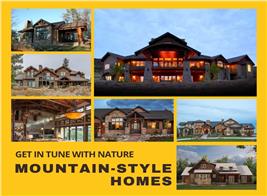 Get in Tune with Nature in a Mountain-Style Home 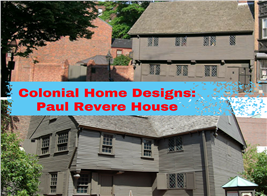 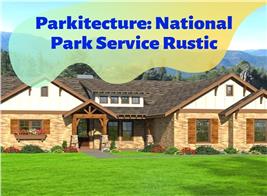