The Shotgun House Finds Its Way Back into the Architectural Landscape 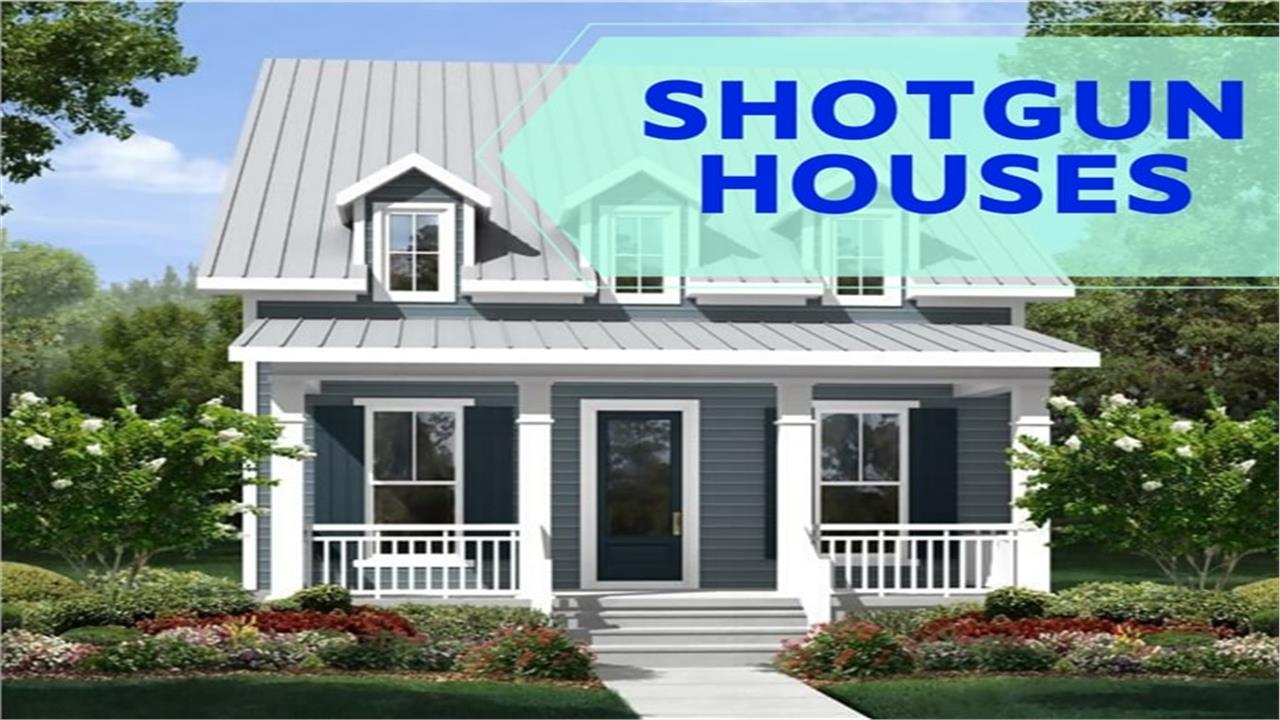 This Home Design is Perfect for Narrow Lots and Tiny Homes

“And you may find yourself living in a shotgun shack.” So go the opening words of "Once in a Lifetime," a 1980 song by the Talking Heads.

From Elvis (who was born in a shotgun house) to the Talking Heads, folk-rock singer Jeff Buckley (who lived in one), John Mellencamp (who based his song "Pink Houses" on shotguns), and Bruce Springsteen (who mentions shotgun houses in his song "We Take Care of Our Own"), the fascination for the shotgun house in popular culture may be unparalleled in residential architecture. The “bare essentials” house style – with its small footprint and challenging layout – originated in New Orleans in the 1800s.

Once a symbol of poverty and even targeted for demolition in many major cities of the South, the style has survived after becoming an important urban house type in the mid-19th century – and is now appreciated as a major part of New Orleans and America’s architectural history. Today, preservationists, as well as potential homeowners, are buying and restoring existing shotgun homes. Perhaps the most popular example of an innovative restoration is a Waco, Texas, which was featured on HGTVs Fixer Upper.

Join us as we explore the interesting and captivating history of this intriguing house style, which has slowly worked its way back into the architectural landscape. 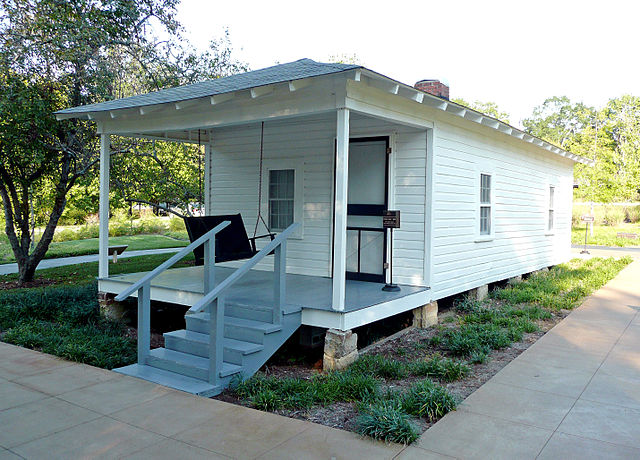 This Shotgun style house, with a shallow hip roof and covered front porch in Tupelo, Mississippi, is famous for being the birthplace of Elvis Presley (photo by Markuskun Public Domain).

What is a Shotgun House?

First introduced in Louisiana in the early 1800s by West African and Haitian immigrants, the Shotgun style house is a single-story residence with a long narrow layout – measuring 12 to as much as 20 or 24 feet wide and two-to-four rooms deep. The rooms are built one behind the other – with each room opening into the other – and only partial walls between the rooms. Doors are located at each end of the house.

In the shotgun’s original design, the living room was situated in the front of the house, followed by one or two bedrooms, with the kitchen in the back of the house. The first shotgun homes did not include bathrooms, but in later shotgun layouts, the bathroom with a small hall was built behind the last bedroom of the house; or a side addition was built off the kitchen.

The original layout of a shotgun house featured a short stoop, a porch, the living room, bedrooms, and the kitchen. A bathroom with a small hall was built off the kitchen (credit: Shotgun house plan by futurebird under license CC BY-SA 3.0).

The shotgun was particularly popular in New Orleans since it fit perfectly into the standard city narrow lot size of 30 by 120 feet – which could not accommodate bigger homes. By the 1880s and 1890s, shotgun homes were built across New Orleans – from the French Quarter to the African-American neighborhoods and areas like the Irish Channel and Esplanade Ridge.

While forever linked to the history of New Orleans, shotguns were adapted throughout the lower Mississippi Valley and in other Southern cities, particularly Louisville, KY. Next to New Orleans, Louisville has the most shotguns in terms of numbers and various styles. Even Chicago and New York have shotguns in their reinterpretations as “railroad apartments.” 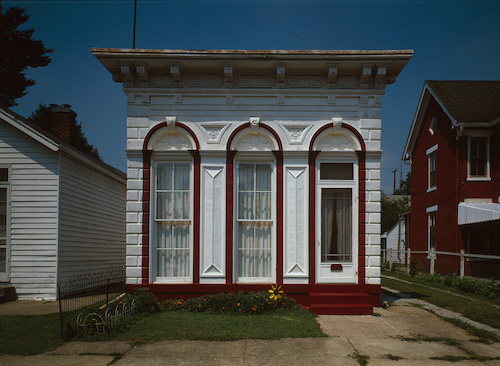 By the 1870s, other cities in the country were adopting the Shotgun style house in their neighborhoods. A beautiful example is the historic John Eckert House in Madison, Indiana, built for Eckert, a local tinsmith. The entire facade of this 18-ft.-by-50-ft. shotgun with Italian Renaissance Revival details is made of metal. The house follows a typical shotgun: an off-center front entrance and interior rooms without a main hallway. The rooms are adjoining and open into the next at the back wall (photo credit: Library of Congress, Historic American Buildings Survey, HABS IN-126, Public Domain).

Features of the Shotgun

A narrow rectangular footprint, simplicity of construction, and efficiency are the signature features of the shotgun. Like most homes in New Orleans, shotguns are usually raised two to three feet of the ground in response to the threats of storms, hurricanes, and high winds that affected the coastal areas of Louisiana. Most shotguns are built almost always close to a street and have a very short front yard.

Here are some of the other distinct characteristics of the shotgun house:

1.  Single door and window in front of the house – there is often a side door that leads to the backroom in some types of shotguns.

2.  Decorative shutters that cover the front door and window

3.  Typically, shotguns have a wood frame structure and siding, but theyre also some made of brick or stone.

4.  Simpler and older shotgun types have flat roofs with no overhang – and no covered front porch

5.  After 1880, roof overhangs with a gable above became part of the shotgun

7.  Rooms with high ceilings – intended to cool the home during the hot summer months – featured decor accents such as moldings, ceiling medallions, and elaborate woodwork.

5 Variations of the Shotgun

Throughout their long history, shotguns have been transformed from the simple, plain vernacular design to the high-style decorated style. While their small dimension can be a challenge, it is also an impetus for architects and designers to be imaginative and innovative in their designs.

Let’s look at the different faces of the shotgun house.

The original concept of the design is the conventional and simplest shotgun form. It features the basic long, narrow shape – one room wide and three to five rooms deep, with each room opening into the next.

2.  The Double Shotgun or Double-barrel Shotgun

Think of it as a duplex or a multi-family unit. First seen in New Orleans in 1854, this design is basically two shotgun houses connected to each other and sharing a central hall. The exterior of the double shotgun had two doors located at opposite ends of the facade. 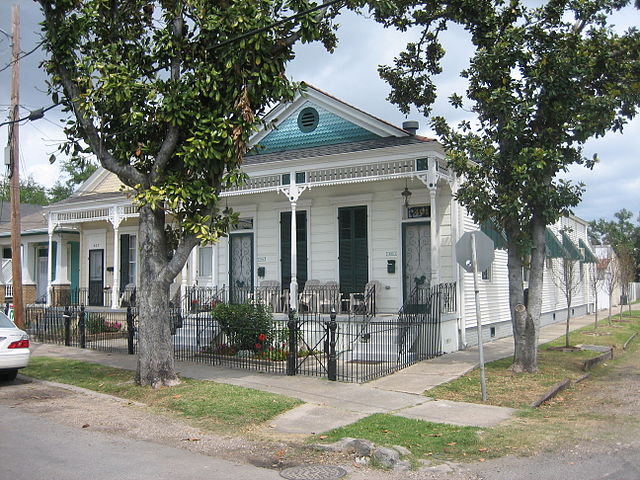 This charming corner house in New Orleans is a good example of a Double Shotgun style home; note the doors on the outside left and right of the structure (photo credit: UptownCornerDoubleHouse by Infrogmation under license CC BY 2.5). 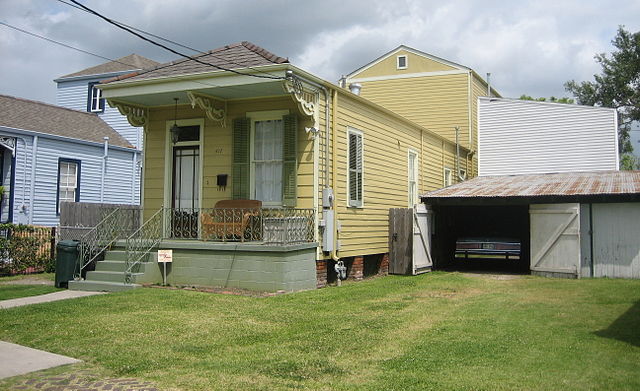 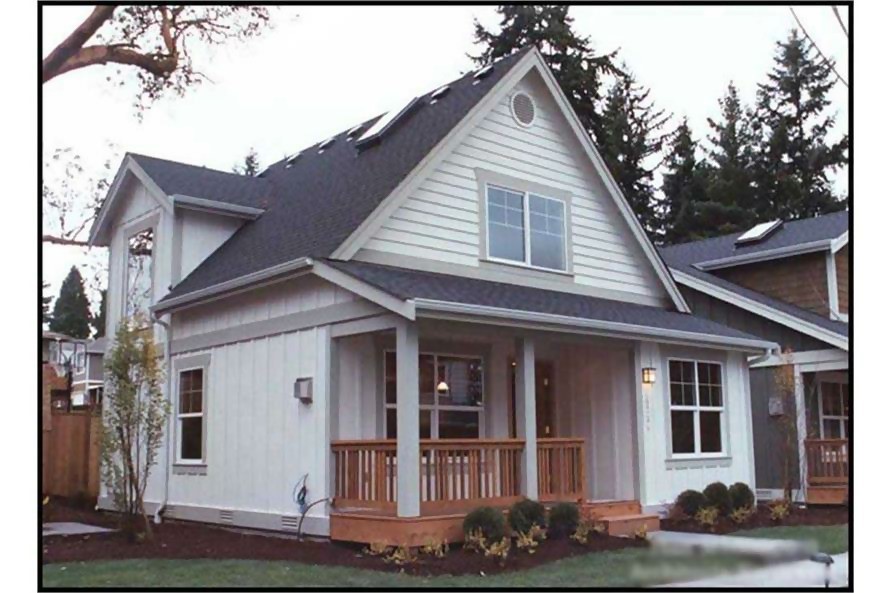 Top: Classic shotgun house in the Camelback style with a garage attached to its side (photo credit: UptownShotgunCamelbackGarage by Infrogmation under license CC BY 2.5). Bottom: Not exactly the typical shotgun, but this delightful 2-story Bungalow that is only 24 feet wide follows the same concept and has some similar features: narrow footprint on a narrow lot, roof overhang with a gable above, small covered porch, short front yard, and a second floor with the master suite. Check out the floor plans below (Plan #115-1371) 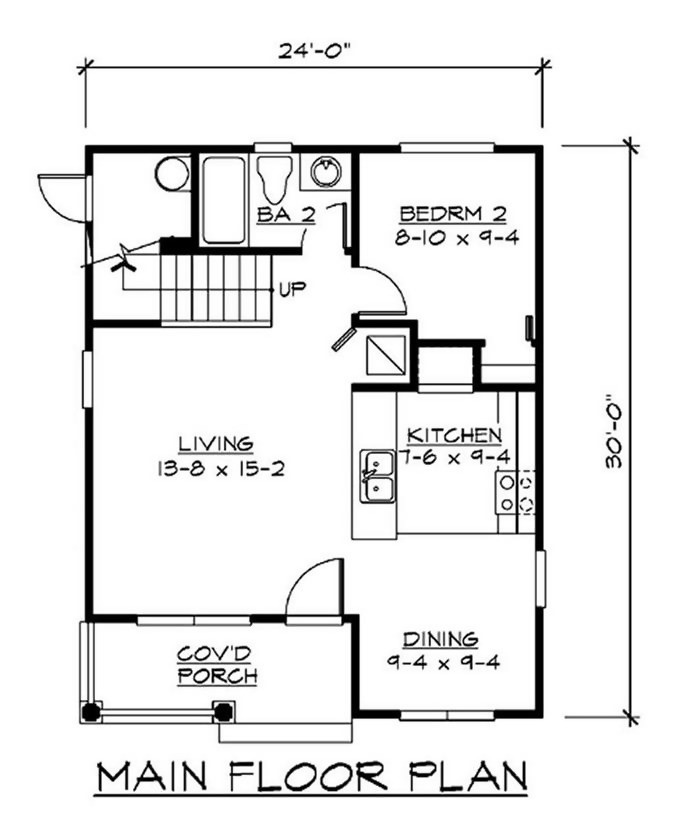 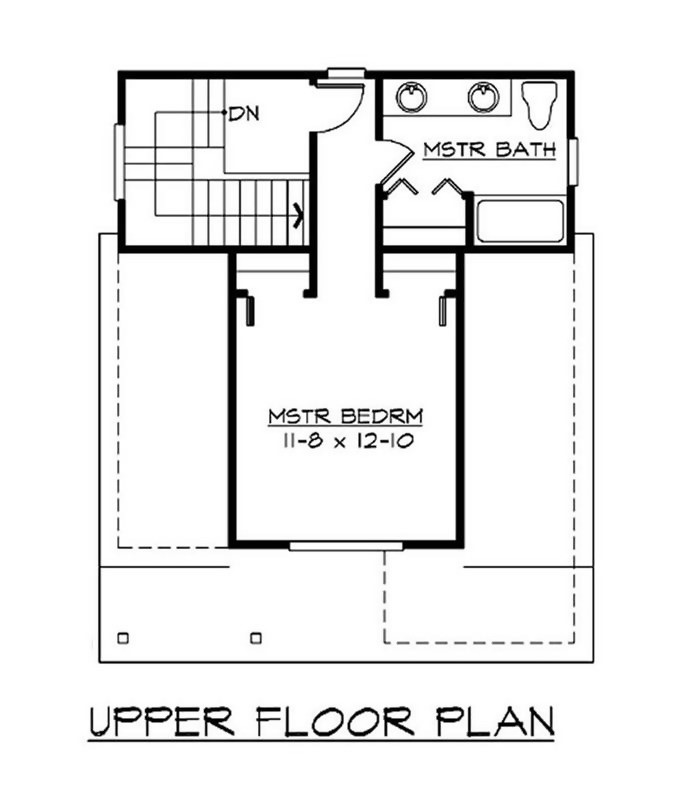 In this design, the entrance is through a side door set under the roofs eave line or a side porch extending the length of the house.  The small door works as a passageway to the kitchen or the rear of the house without going into the front parlor.

Named North Shore because most were built on the North Shore of New Orleans as summer vacation homes for the wealthy, these shotgun homes have wide verandas on three sides.

Why Is It Called "Shotgun"?

The reason for calling it shotgun is unclear. According to folklore, the explanation is that because of the open layout, one “can fire a gun through the front door, and the bullet could exit out the back door without hitting anything.”

However, architectural historians note that shotgun is a derivation from the West African word “shogun,” which means “house” or “God’s house.” The term was passed down through the freed Haitian slaves who immigrated to New Orleans at the beginning of the 19th century.

Origins of the Shotgun

It has long been believed that the shotgun originated in the French colony of St. Domingue (now known as Haiti), where enslaved West African slaves built similar dwellings based on the architecture in their homeland. Following the St. Domingue Revolution in 1791, when slaves rose in arms and successfully destroyed the island’s plantation slavery system, the nation of Haiti was created.

Thousands of the freed slaves from St. Domingue migrated to New Orleans – and brought their architectural traditions with them – particularly the shotgun style. Folklorist John Michael Vlach noted that “Haitian migrants had only to continue in Louisiana the same life they had known in St. Domingue,” … so the “shotgun house of Port-au-Prince became … the shotgun house of New Orleans.”

Most of the early shotguns were built as rental properties in manufacturing centers or railroad hubs to house workers. Because of their location and purpose, shotguns were associated with poverty – and did not generate much interest. But by the late 20th century, shotguns were mostly owner-occupied and restored to accommodate the family’s needs.

As the shotgun fell in and out of fashion, many of the earlier structures built in the 19th and early 20th centuries fell into disrepair – and were demolished at the height of the urban renewal efforts in the 1960s and 1970s.

However, preservationists who cherished the shotguns historical significance and architectural impact began restoration projects in major cities. In addition to New Orleans, cities like Houston, St. Louis, Louisville, and Miami have shotgun homes designated as historic structures. And in some neighborhoods with a high proliferation of shotguns, property values have skyrocketed.

Aside from its historical significance, the shotgun is gaining popularity with the tiny house movements growth. Home buyers are captivated by its simple charm and potential for innovative decor accents. And property owners who have to build on narrow lots can always look to the shotgun – and its many variations – for design ideas. 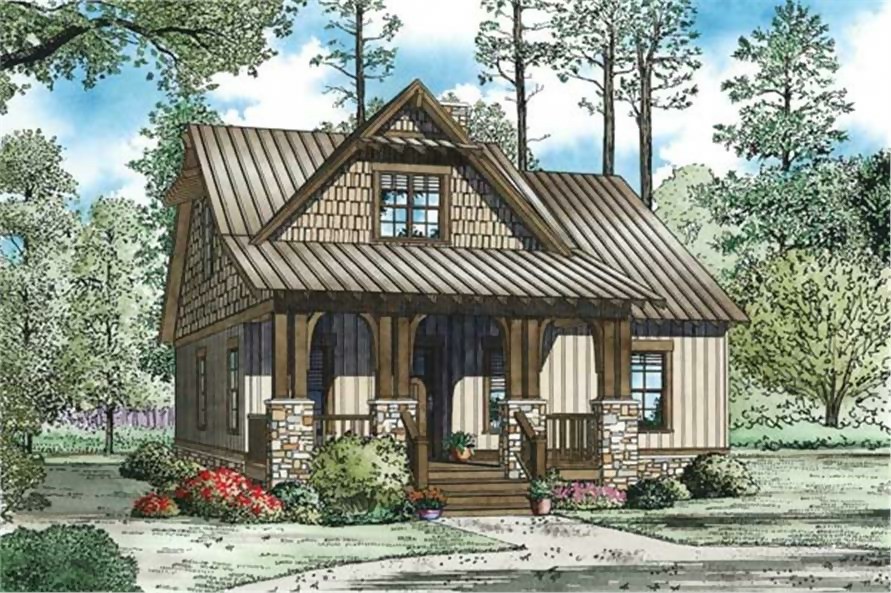 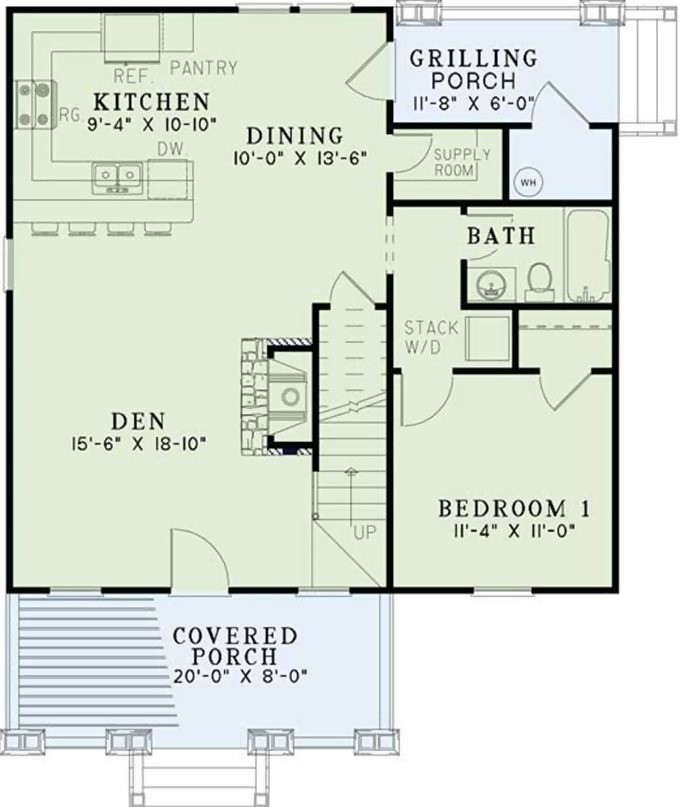 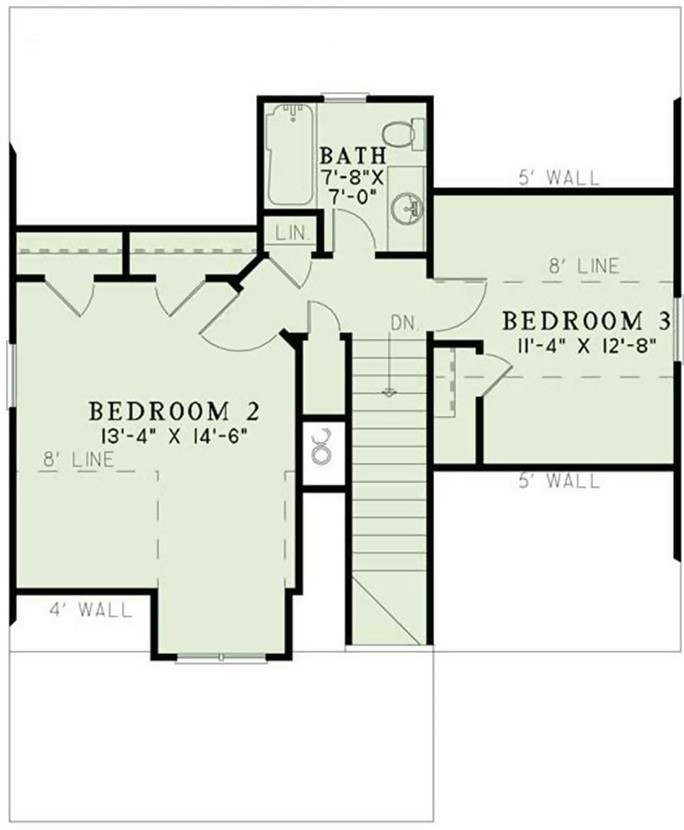 Top: Take a look at this attractive two-story Craftsman style home specifically designed for a narrow lot. The home – with a width of a little more than 31 ft. – packs 1,379 sq. ft. of living space on the property, including a covered porch, 3 bedrooms, 2 full baths, a grilling porch, and a den. Middle: From the covered front porch, step into the first floor of the home and check out the open floor layout. The Great Room – which includes a den, kitchen, and dining area – is on one side of the floor, with the master suite on the other side. Bottom: The second floor includes 2 more bedrooms – similar to the Camelback Shotgun where the bedrooms are on the upper floor (Plan #153-1147).

With the emphasis today on environmentally friendly and energy-efficient homes, the shotgun was prescient and set the standard for a charming and intriguing style perfect for a narrow lot.

Footnote: The lead image in this article is a striking two-story Cottage style home with 2172 square feet of living space. The home, which is 24 ft. wide and 93 ft. deep, includes 4 bedrooms and 2.5 baths. For more information on this charming home, go to Plan #142-1122 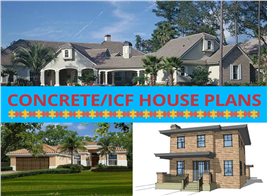 The Advantages of Building a Concrete Block / ICF House 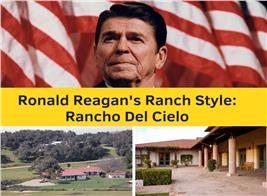 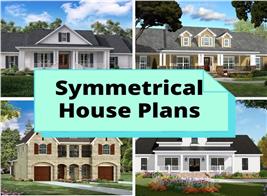 Symmetrical Houses: Features to Look For