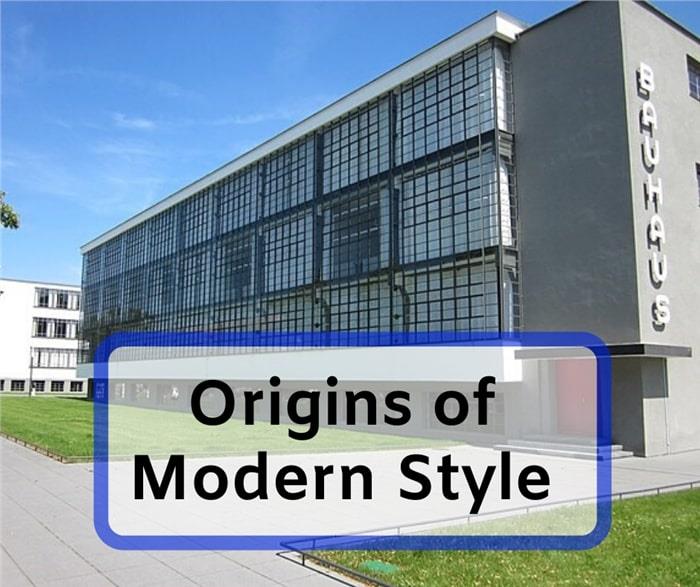 The Style Where Design Meets Function . . . Or Does It?

The Bauhaus style of building fueled the ideas and changes that developed into the modernist movement – and eventually Modern style architecture as we know it today.

The style is famous for its use of straight, rectilinear lines, concrete and steel, and spartan interiors with minimal embellishment. If you prefer to keep things simple, then this style home could be the perfect one for you.

To help you decide if this is the case or not, we’ve put together a brief history of the Bauhaus style, as well as a closer look at its most recognizable features, which have been kept alive in Modern architecture.

What Is Bauhaus Style Architecture?

Essentially, Bauhaus is an architectural style in which the focus is not on aesthetics but rather the functionality of a building (and the spaces within it) as a whole.

The movement was born in Germany at the Staatliches Bauhaus, an art school operational from 1919 to 1933.

At its onset, the goal of the Bauhaus (literally “building house”) movement didn’t even have an architecture department. Instead, the aim was to unify art, craft, and technology. The school hoped to solve unique problems of design not with direct action but rather by understanding timeless principles to create long-term solutions.

To do this, students learned basic elements and principles of design and color theory during the first year of their studies. Next, they would experiment with a range of materials and processes.

Although the school closed its doors in 1933 due to pressure from the time’s growing Nazi regime, its ideas were not lost as its staff took its ideas with them as they fled Germany and emigrated all over the world. 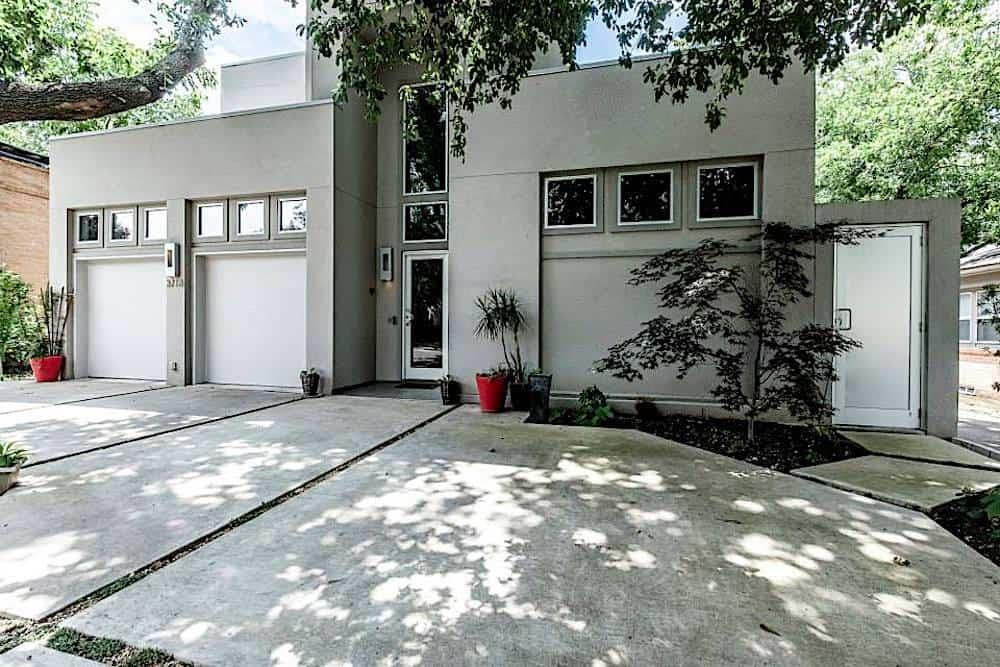 Bauhaus around the World

While the Bauhaus style’s origin is in Germany, due to the emigration of the school’s staff (and the style’s overall functionality) you can now see examples of buildings in the style throughout Europe, North America, and even the Middle East.

In fact, in 2004 Tel Aviv landed on a list of United Nations world heritage sites because of its many Bauhaus buildings. From 1933, over 4,000 Bauhaus buildings have been built in and around the city.

Mainly built by Jewish architects fleeing Nazi-occupied Europe, the area even has a special name, the White City due to its unique aesthetics: white concrete or stucco-covered concrete or masonry is the prevailing exterior finish for Bauhaus-inspired buildings. 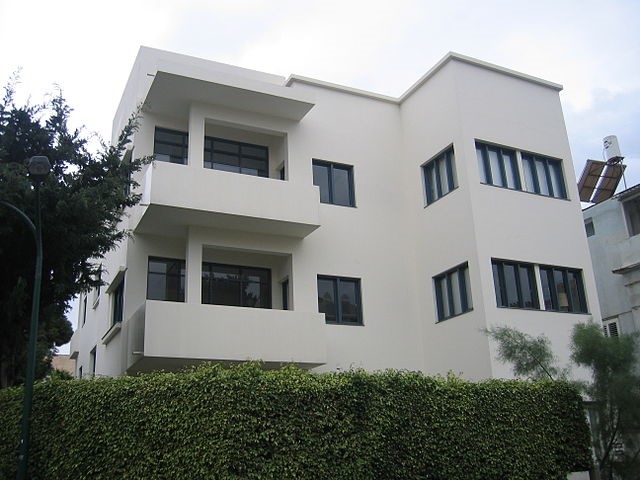 The Bauhaus Museum in Tel Aviv above, reflecting typical Bauhaus Modern Architecture, commemorates the Bauhaus style and the White City section of the region (photo credit: Bauhaus Tel Aviv Museum by Talmoryair under license CC BY 3.0).

Features of a Bauhaus Building

Modern Germany has a stereotype of being a plain, punctual, and efficient country. If you take these notions and translate them into a building style, you have the Bauhaus design in a nutshell.

Here are the most common features of buildings in the Bauhaus style. These are handy to know for prospective buyers, builders, or those who simply wish to have a name for the types of buildings they see before them. 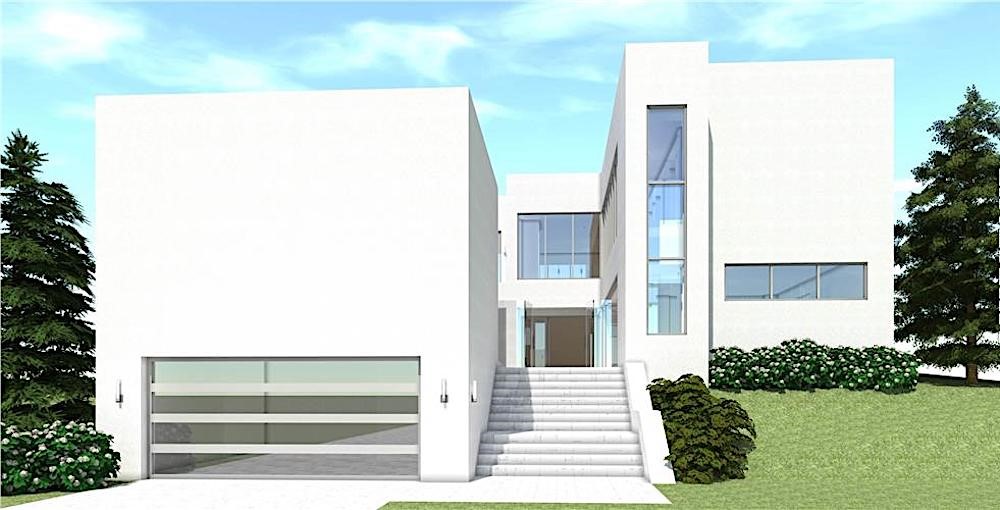 All Bauhaus buildings are cubic in shape. This doesn’t mean that they are perfectly square but rather rectangular – or a perfect mix of the two.

There is nothing ornate about these buildings at all.

This is because they only have one purpose: to provide housing – and that’s it. If you prefer functionality over ornate decorations, then you’ll love these types of homes.

As discussed, this school of architectural thought doesn’t have any space for “fluff.” Here, fluff could mean curved lines, differing wall height, or extreme color variation.

Due to their simplistic nature and cubic forms, Bauhaus-style buildings are also famous for their clear lines. Each wall, ceiling, window frame, and floor space has sharp, clearly defined lines.

The distinctness of these lines leave no question as to the purpose and boundaries of each space.

The flat roof might be one of the most identifiable – and best – features of Bauhaus buildings. This is because it instantly adds extra square footage with the least amount of wasted spacd to a home, which is especially useful in urban spaces.

You can use this space as an outdoor dining room, a lounge, or even a rooftop garden. To a Bauhaus architect, a sloped roof is a waste because it simply eats up available space that could be used for something else.

While many pitched roofs offer attic space, the attic is typically small, cramped, and offers little useful room for storage. And that’s not very functional, is it? 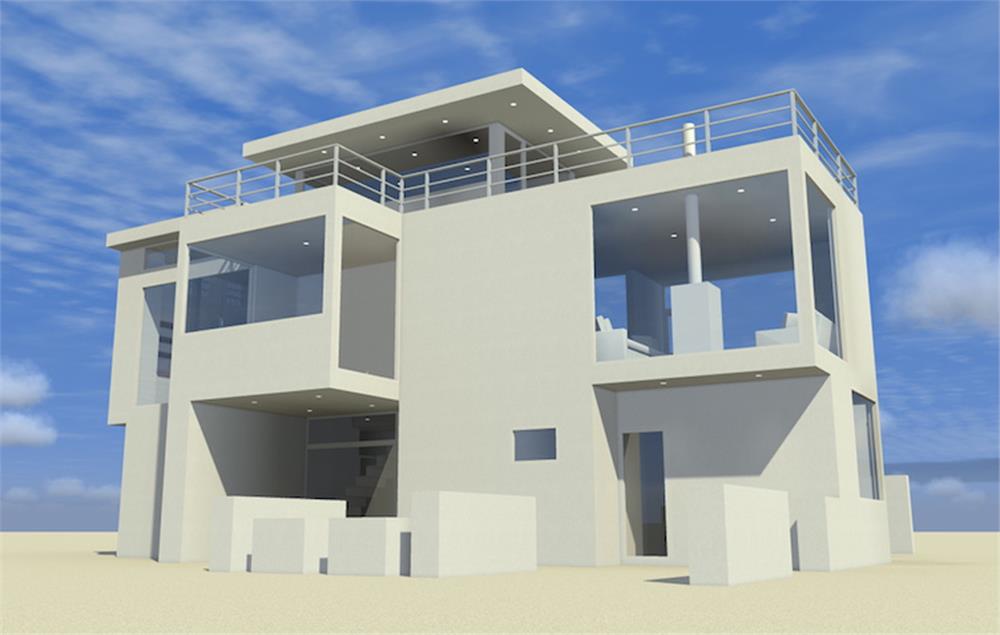 Displaying all of the signs of classic Bauhaus style architecture – cubic form, clear lines, simple design, flat roof – this Modern style beachfront home seen durng the day (top) and at night with dramatic lighting (bottom) has 3 bedrooms, 2 baths, and a half bath in 1923 sq. ft. (Plan #116-1084).

There are also several features that might be included in a Bauhaus building, but each new construction doesn’t necessarily include all of them.

Here are the most common secondary features in this style:

While single-level dwellings are possible, most Bauhaus single-family homes are at least two stories.

Think about it: is it really the best use of space to only build one level on a lot you already own? You might as well expand upward to maximize all available space.

Because of its innate ability to maximize space, the Bauhaus style is also popular with apartment developers and others who build more “communal” housing. It’s very common, especially in Europe, to see Bauhaus buildings with upwards of ten floors. 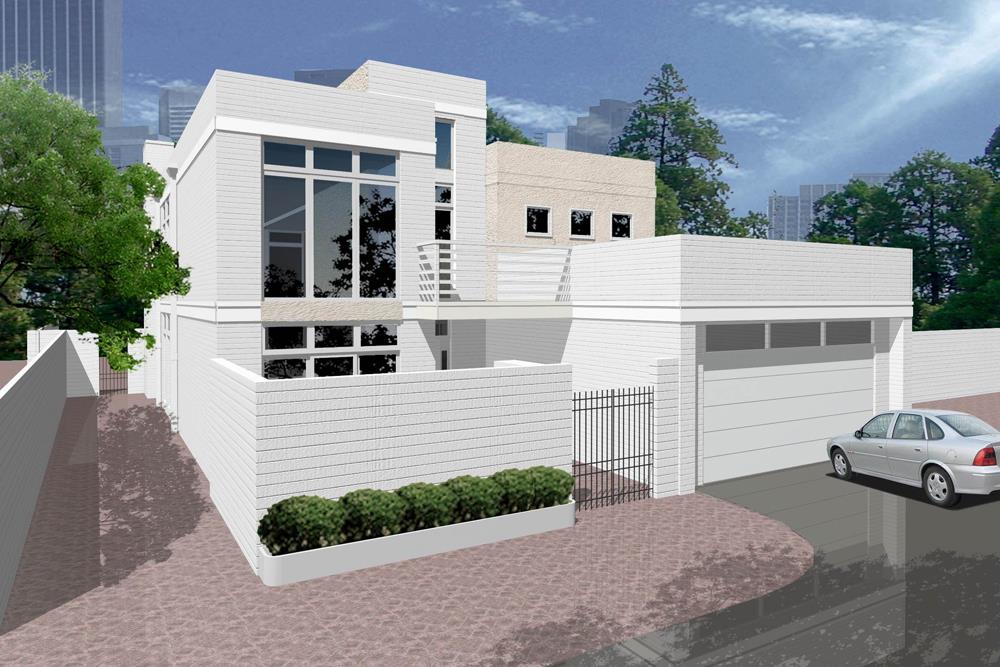 At 2 stories tall, this 4-bedroom, 3.5-bath Modern style home with obvious Bauhaus influences is typical of the multi-story design of the German-origin architectural style (Plan #195-1185).

Natural light is a cornerstone of the Bauhaus movement. Besides the classic clean lines of the exteriors, this style of home is usually easy to spot because of the inclusion of at least one large window facade.

One can assume that these larger windows were originally included because natural light costs less to supply than artificial light, thus saving money for the occupants in the long run.

However, in a modern twist (on a modern style!), the large windows and warm sunshine provided by them offers these buildings a touch of coziness to what some might call an otherwise “cold” space. 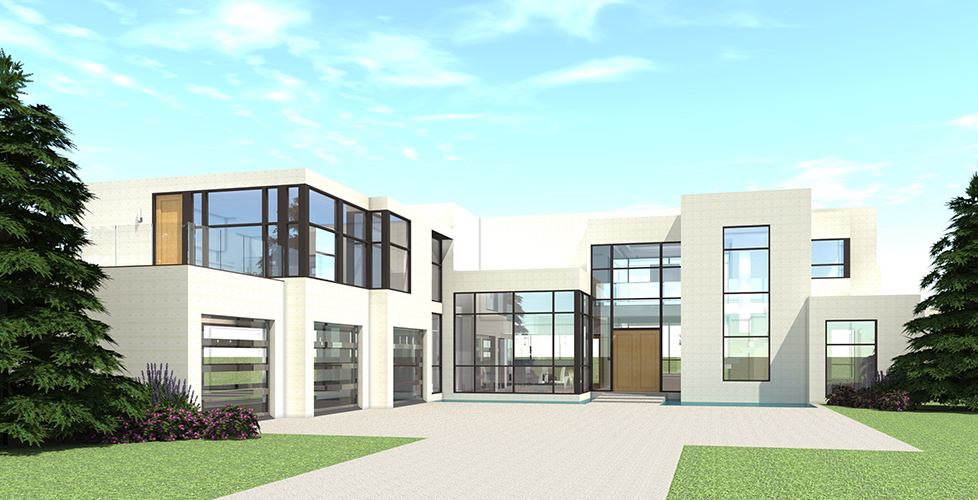 A 5165-sq.-ft. luxury home with 3-car garage, this Modern style home displays large, dramatic glass facades on front, sides, and rear of the house, letting in abundent natural light and, if placed correctly, solar gain. Todays homes use double- or triple-pane glass (often using plastic film as a "pane") that is is insulating when installed in a window. The glass may also be coated with a high-tech clear barrier to UV light rays (Plan #116-1106).

The design gives you freedom in how you choose to use your space.

This is because most of the rooms inside the classic cubic house are typically very open in concept and many feature “uninterrupted walls.” These are walls that do not have a window or door. The doors of adjacent walls also do not open onto them.

Because of the ample space and openness of the inside floor plan, these homes often seem “bigger on the inside” and offer homeowners and renters alike more space than might seem initially available. 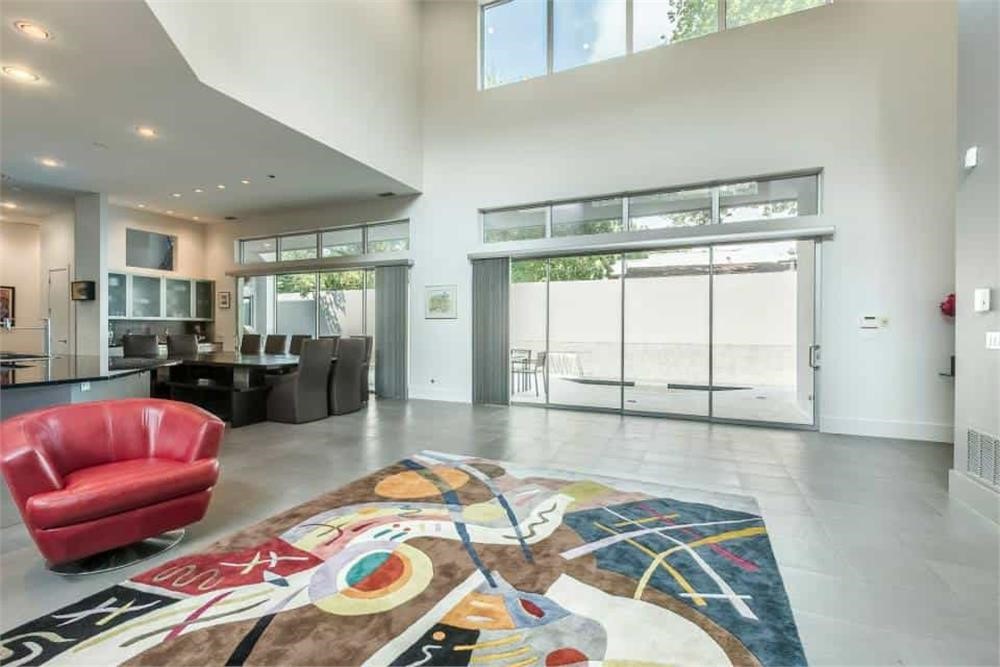 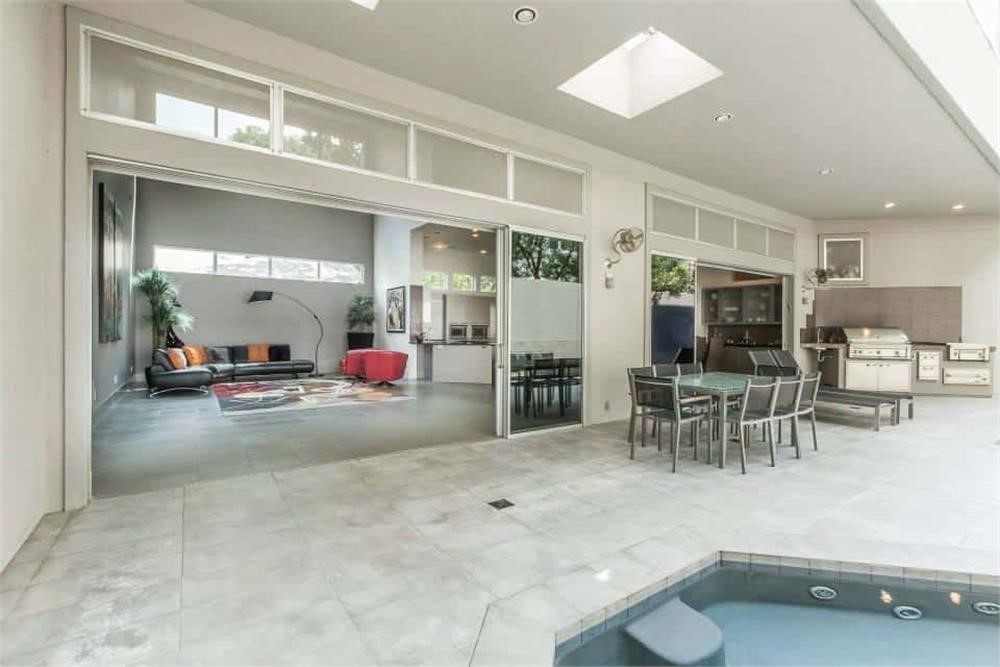 The open room in the photo at top is shown from the inside while the same room at bottom is shown from the outside, demonstrating the “wall of glass” that slides open. Large open rooms are often seen in homes designed in the Bauhaus style of architecture (Plan #195-1249).

Because of the clean, smooth lines commonly associated with the Bauhaus movement, some people may confuse other modern types of architecture with it.

For example, the famous American architect Frank Lloyd Wright was a champion of modernist buildings. And although his constructions (even his most famous, Fallingwater near Pittsburgh, Pennsylvania) have sharp, angular surfaces at first glance, upon further examination, one can easily see that there’s something just a bit different about them.

In fact, Frank Lloyd Wright’s style actually grew out of the Arts and Crafts movement, which occurred at the end of the 19th century. These buildings, while modern, were more used for smaller farming structures – and thus were very close to nature. 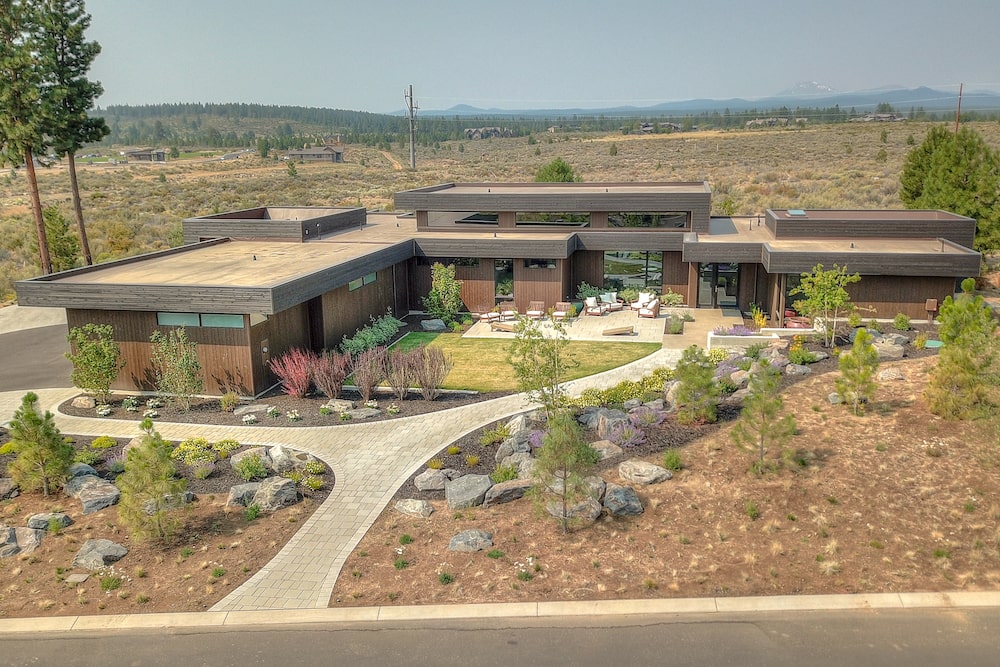 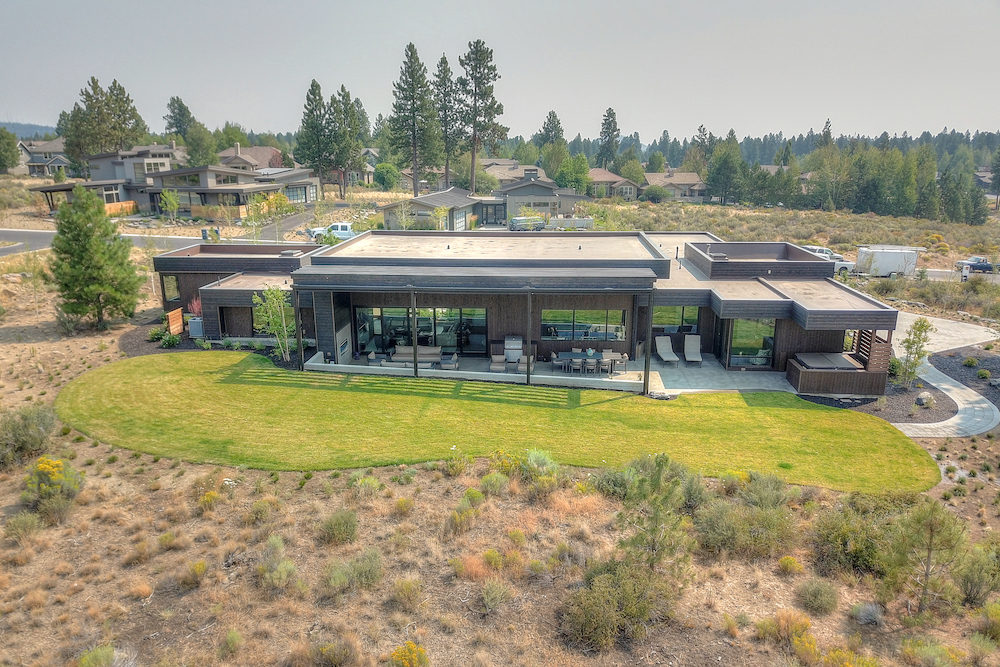 Though similar in appearance to classic Bauhaus type arcitecture, this Modern style home (front at top and rear at bottom) departs in a significant way: by incorporating the surroundings – and materials other than concrete, steel, glass, and plastic – into the design and "becoming one" with nature and its sourroundings (Plan #202-1027).

If you look closely, you’ll see that homes like this might seem more “classically modern,” i.e., closer to the Bauhaus style, but they are really pulling their form from things like plants, flowers, rocks, and streams.

While these buildings can have sharp angles or rustic materials (like concrete), each element is also always tied back to nature. You can see this best in Frank Lloyd Wright’s own studio in Oak Park, Illinois. In this structure, you can see how the style invites nature to “become one” with the building.

In stark contrast are the completely manufactured, obviously man-made aspects of Bauhaus architecture. These structures are all concrete, steel, glass, and plastic. There is no room for nature at all, only strict functionality – which is really what sets them apart.

Strong in form and bold in design, the Bauhaus aesthetic is the father of Modern residential architecture. The style’s clean lines and open spaces might be polarizing in terms of aesthetics, but no one can deny that the homes are highly functional for daily life. 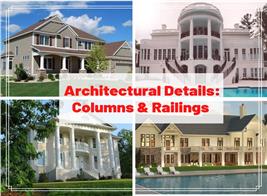 10 Great House Plans with Mud Rooms
Why Ceilings Matter in House Design
Columns, Posts, Pillars, and Railings in Contemporary Homes
What Makes a Cabin a Cabin: The Definitive Guide
French Country Style: Elegant Simplicity and Old World Charm
Common Bathroom Design Mistakes and How to Avoid Them
What Is a Construction Loan, and How Does It Work?
Pros & Cons of Out-of-the-Ordinary Foundations
Average Cost to Frame a House – Framing Lumber & Steel Prices
Texas Modern Style – Adapted to the State’s Climate and Landscape