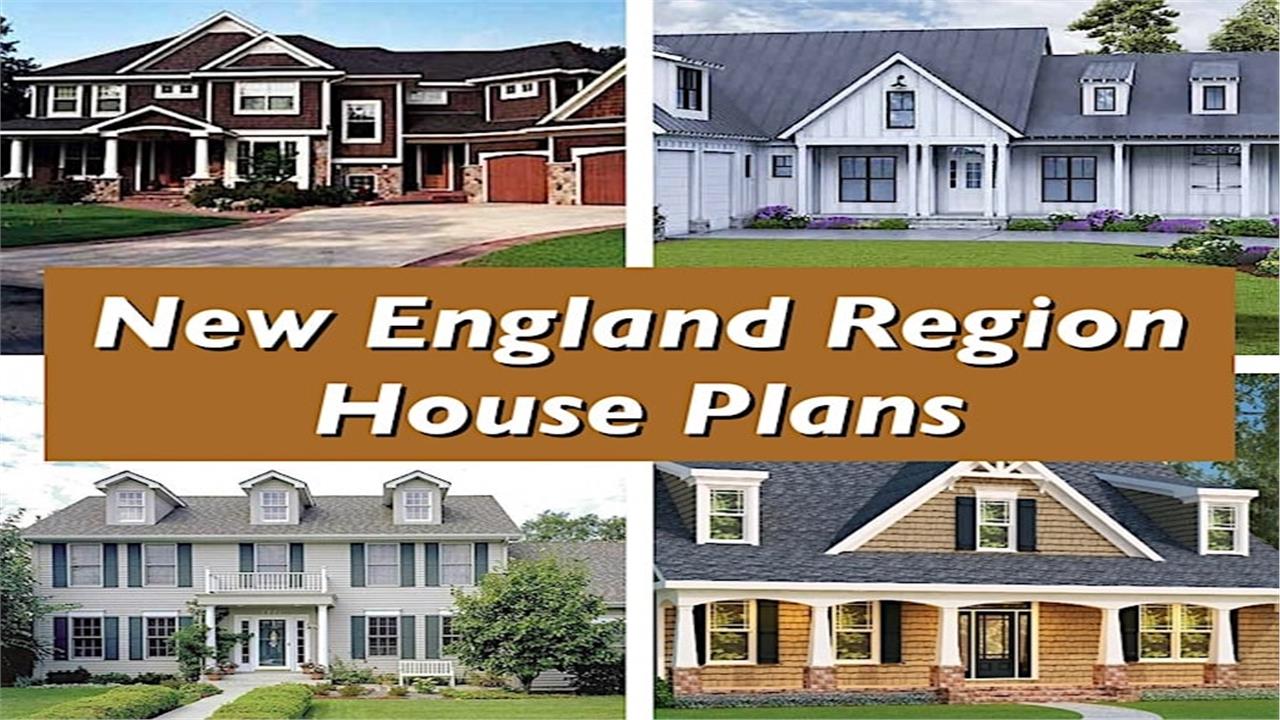 The Many Faces of Architectural House Designs in the Northeast

Along the hills, the countryside, and coastline of New England – from the southernmost tip of Connecticut all the way north to Maine – fascinating homes of diverse architectural styles line village and city streets. The sights can be modest Cape Cods and Colonials, Shingle-style homes, Federal row houses on Boston’s Beacon Hill, modern Farmhouses, or one of those imposing historic mansions in Newport, Rhode Island.

Often called the essence of Americana, New England house plans have about 400 years of architectural influence from around the world. These homes originated from the creative vision and culture of the different European settlers in the region. They combine the quaint and historic with the comfortable, charming, and warm. 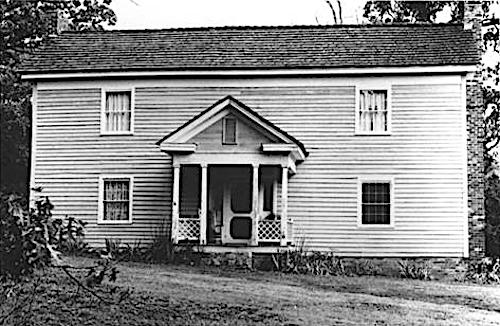 Whether you are a traditionalist or a modernist, drawn to the Farmhouse, the beach vibe, or the refined geometry and symmetry of these homes, you will find truly captivating and intriguing elements in the New England style.

Let’s take a look at five New England architectural styles most commonly associated with the region:

Timeless and elegant, the Colonial style – which originated in the early 17th century – has adorned the country’s architectural landscape more than any other house plan. Perhaps the most popular home style in the United States, it draws its design from the early European settlers on the Eastern Seaboard. While there are a number of variations – ranging from the English to the French, Spanish, and Dutch Colonial – the English design is the most prevalent in New England.

The first Colonial homes in the country constructed by the British settlers were rustic square structures with a saltbox roof, a large chimney at the center of the home, and diamond-paned windows. They were two-story homes – built of wood, with a simple, balanced exterior façade – patterned from styles in the counties of England. In these homes, the living/social spaces were separated from the living quarters – with the bedrooms typically located on the second floor. 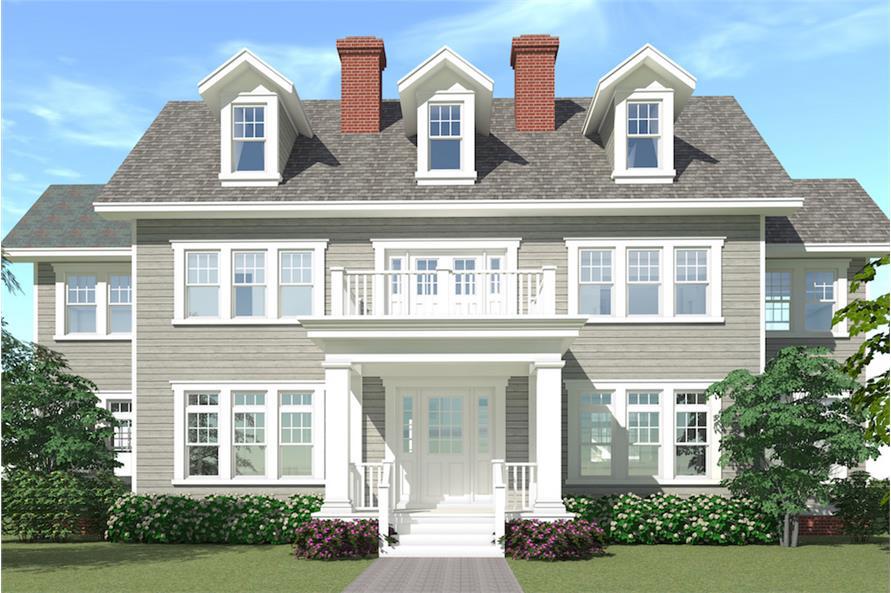 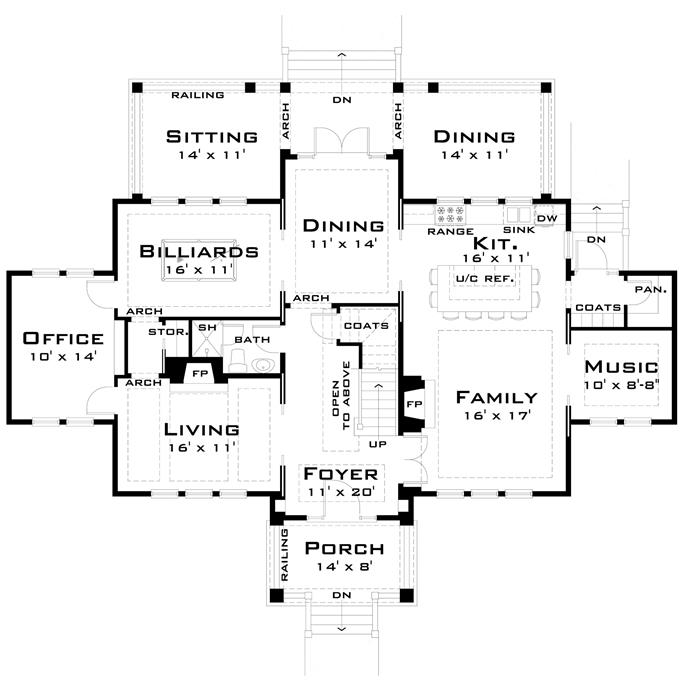 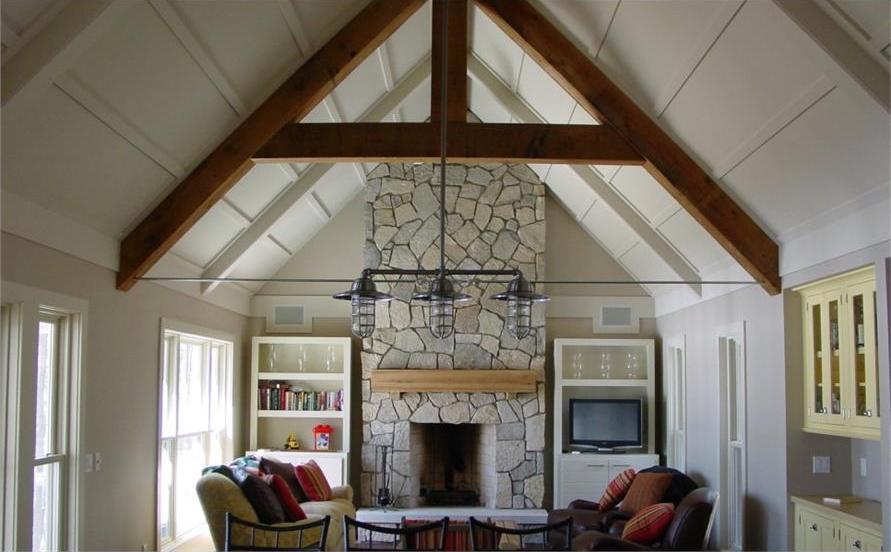 Top: This charming 2-story, 3,347-sq.-ft. center-hall Colonial style home features 4 bedrooms and 4 bathrooms. The lovely home has a covered front porch, balcony, the signature symmetrical facade with dormers, chimneys, and a centered front door. Center: The main floor plan of this delightful home shows the layout of the first floor, which in typical Colonial fashion separates the dining and social spaces from the bedrooms. Bottom: The second-floor blueprint of the 2-story Colonial house illustrates the location of the bedrooms – including the master suite – the sundeck, and the terrace (Plan #116-1099).

Over the years, the Colonial style has been modernized and updated. Contemporary Colonial house plans may include columns, dormers, and decorative window shutters. But the design retains its distinct characteristics:

• Few to no overhangs 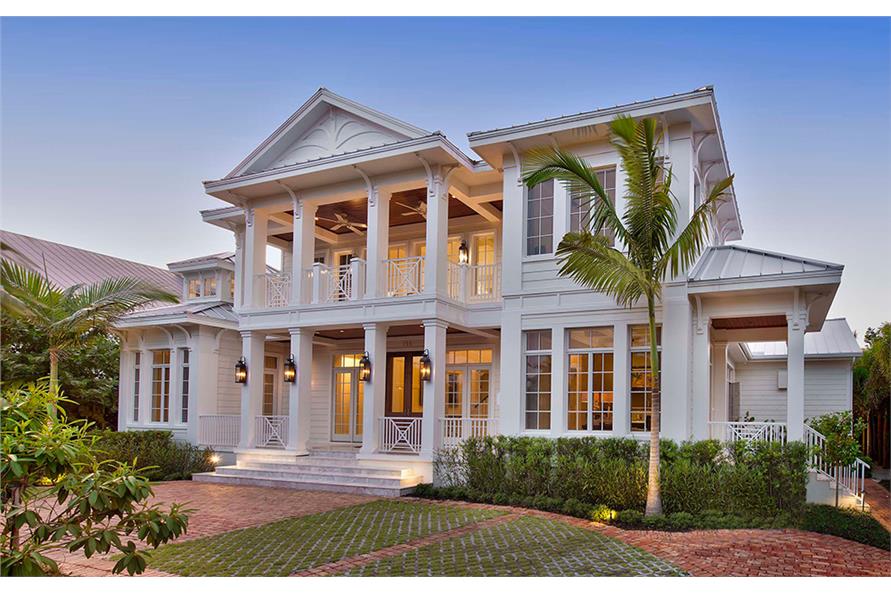 Symmetry in Motion: This stunning 2-story Contemporary Colonial style home with 5 bedrooms and 5 baths is a real show-stopper! Its design has been altered somewhat for Southern climes – specifically by adding that 2-story front porch and lots of outdoor living space. The amazing home has matching white columns on both floors, a gable roof, and large symmetrical multi-pane windows on the right side. Sconces adorn the four pillars flanking the front door (Plan #175-1243).

Like the Colonial style, the Cape Cod design is also one of the most recognizable, enduring, and beloved house forms. It was developed in the New World by British settlers who – once again – modeled the home after the simple and practical ones in England but adapted it to the harsh and snowy winters in New England. 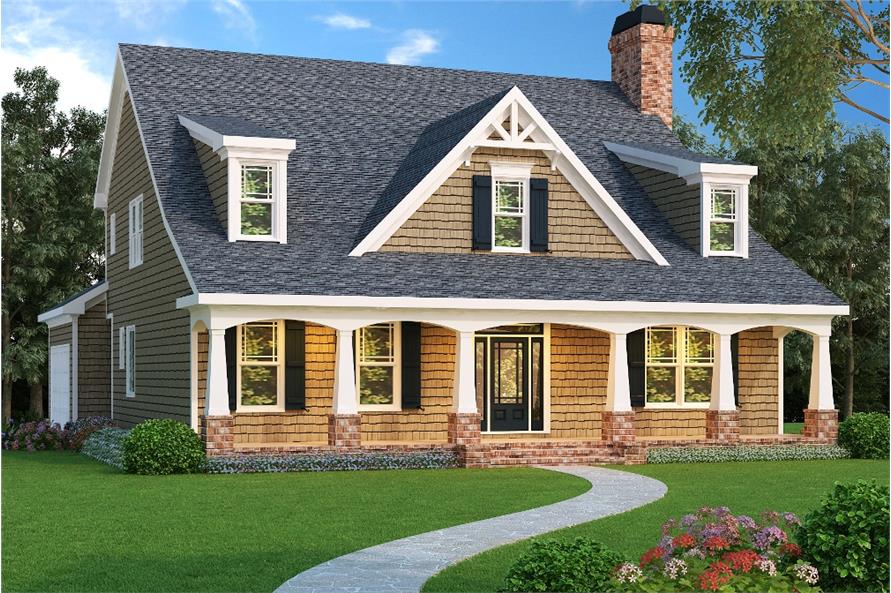 This modern 2-story Cape Cod home with Craftsman touches has more than 3,000 sq. ft. of living space, 5 bedrooms, 4 baths, and a gable roof with asphalt shingles. The contemporary accents add to the charm and appeal of this Cape Cod plan (Plan #104-1084).

When Cape Cods were first introduced in the original 13 Colonies, they were mostly unadorned one-level homes for small families – designed more for function than aesthetic. The basic rectangular and gable sloped roof of the Cape Cod made it easy to construct and heat efficiently. The low ceilings and a chimney kept the home comfortable during the cold weather, while the steep roof allowed snow to slide off without any difficulty and prevented the buildup of ice and other moisture that could damage the roof. In addition, the rectangular shape made it very convenient to make additions to the home.

Some of the defining features of Cape Cod house plans:

• Steep roof with side gables

• Unfinished space above the first floor 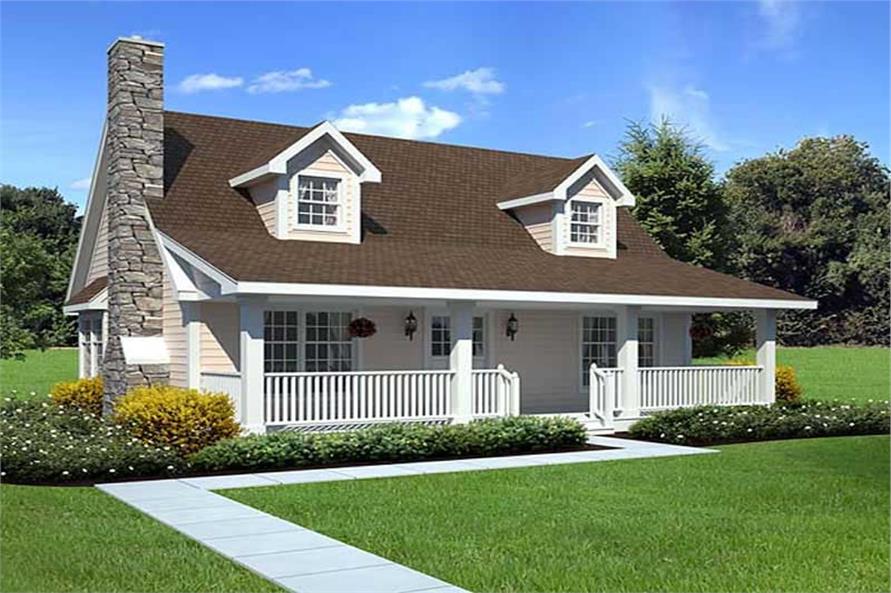 As the Cape Cod gained popularity over the years, the homes were expanded to one-and-a-half story structures. With more construction materials available, “exterior siding changed with the times — from traditional wood shingles to clapboard, board-and-batten, cement shingles, brick or stone, and aluminum or vinyl siding.” Its once unadorned facade now featured decorative window shutters instead of the 17th-century functional ones that protected families from the cold winters and strong winds of New England.

The most dominant style in the colonies from 1700-1780, the Georgian design derived its name from the first four King Georges, who ruled England successively from 1714 to 1840. It was the first architect-inspired style in America – thanks to British architects Inigo Jones and Christopher Wren – who were greatly influenced by the principles of classicism, order, and symmetry outlined by Italian architect Andrea Palladio in his famous work – The Four Books of Architecture.

Georgian style homes embody the English concepts of properness and order – as illustrated in the highly symmetrical exterior and interior layout. Its distinctive characteristics include:

• A gable or a hip roof with dormers

• An extended walkway leading to the main door

• Archways, pediments, or decorative element above the central door

• A central hall and staircase are often flanked by formal rooms on each side. 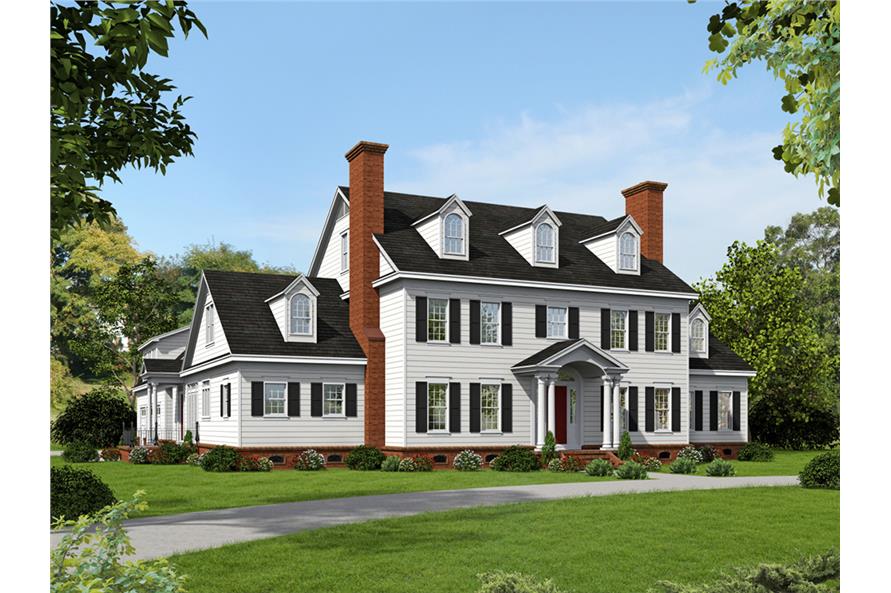 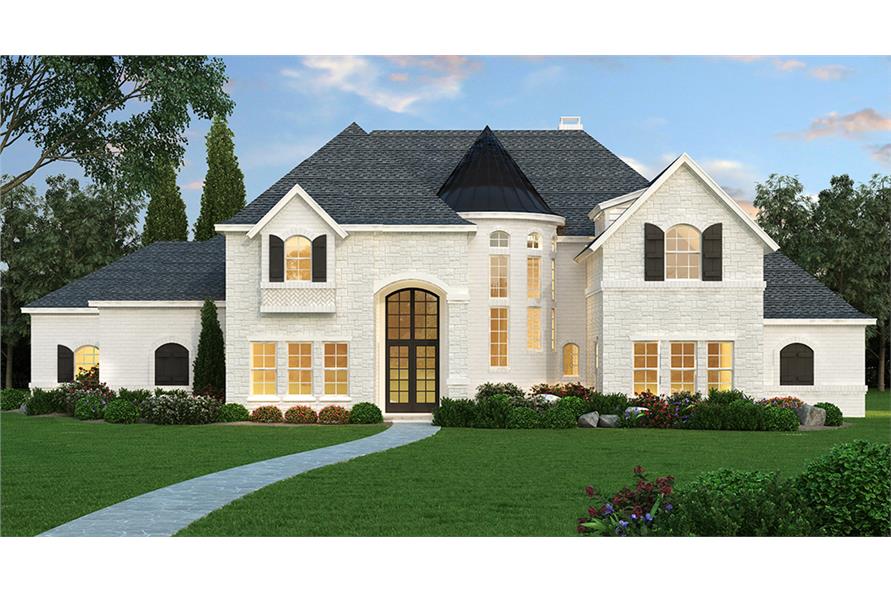 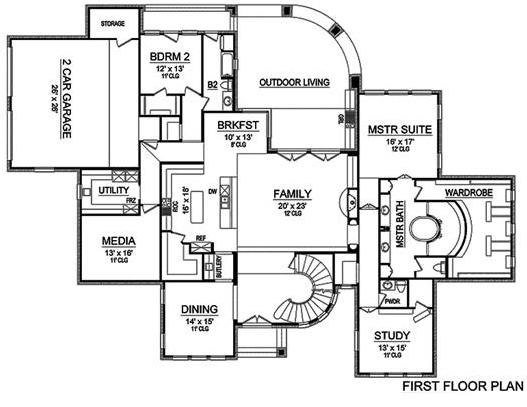 Top: Check out this lovely 2-story Georgian style home with 6 bedrooms and 4.5 baths that prominently displays a number of the signature features of the design. Order and symmetry prevail – with the pair of chimneys, small windows with decorative shutters that flank the central door, gable roof with three dormers, paved extended walkway leading to the short covered porch, or portico, and the main entrance (Plan #196-1023). Center: This eye-catching 2-story modern Georgian style home with 4 bedrooms and 4.5 baths has the traditional gable roof, symmetrical elements, decorative shutters, and dramatic front door typical of the design. The 11- and 12-ft.-tall ceilings inside the home add to its grandeur and stateliness. Bottom: The first-floor layout of the 2-story Georgian style home above shows the high ceilings in the entire space (Plan #195-1160).

What can be more American than the Farmhouse style? These simple houses built on farms in the 1800s were born out of necessity and hard work. Even with a fashionable makeover today, Farmhouse homes remain an age-old symbol of the early settlers pioneering spirit in the Colonies. Full of the warmth and love of family life, the Farmhouse style – with its wide-covered porches and dormers – remains one of the most timeless and appealing designs. 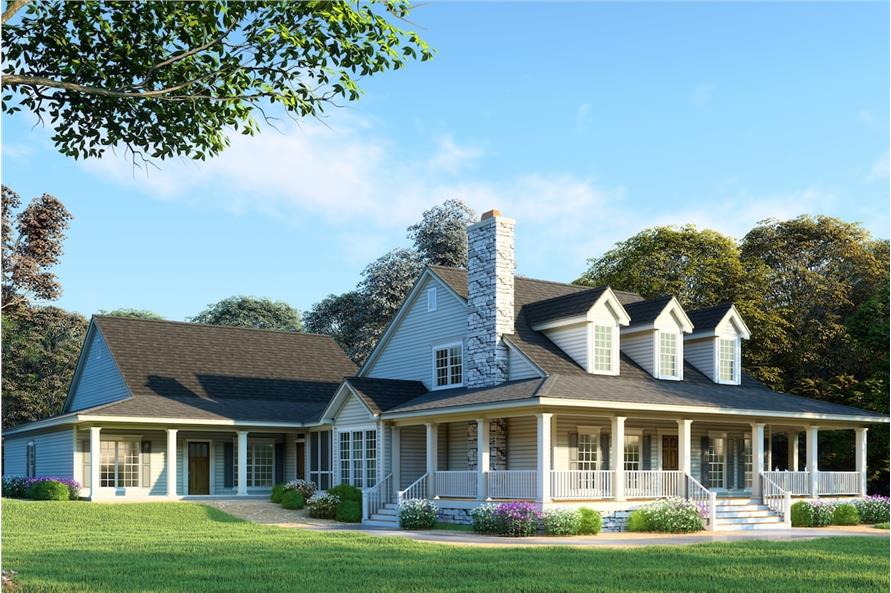 You have to love that wraparound porch! It’s one of the many attractive features of this delightful Farmhouse style home with 6 bedrooms and 4 bathrooms. Take the traditional dormers, the gabled roof, the chimney, the beautifully manicured lawn, and the flowers and shrubs surrounding the spacious porch (Plan #193-1017).

Farmhouse homes are usually one or two-story structures with simple, vertical lines. Bedrooms are generally on the second floor, although some designs may have master suites on the first floor. The signature feature is the wide covered porch that wraps around the entire house or just extends to the front door. Today’s porch can be as elaborate, simple, and homey depending on a person’s taste and style.

Other popular features of Farmhouse plans include:

• Large and spacious kitchens, which were a must for the first farmhouses in the country. Nothing has changed since the kitchen is still the “heart of the home” – the place for meals, special occasions, and daily family gatherings. 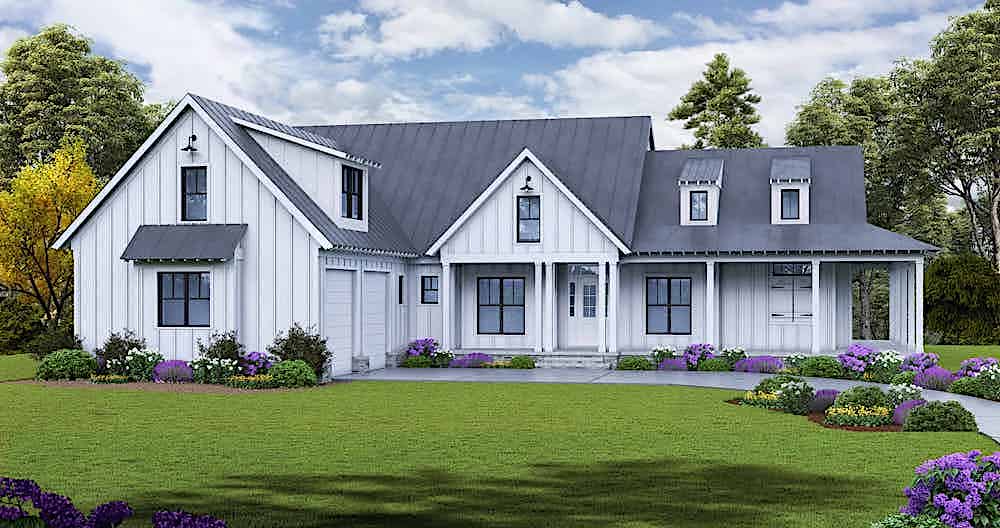 Uniquely American and considered native to New England, the Shingle style is found across the country – and in seaside resorts and coastal towns in New England. Introduced in the 1880s, Shingle homes were designed as summer destinations for the wealthy – spacious, sprawling with six or more bedrooms.

Instead of the ornamentation common to Queen Anne and Victorian architecture, Shingle style homes feature simple, clean lines and a rustic look – similar to the Colonial, Cape Cod, and Farmhouse designs. There is less fancy trimwork with these homes – just the wood shingles that cover the roof and walls accented by simple trim painted white. 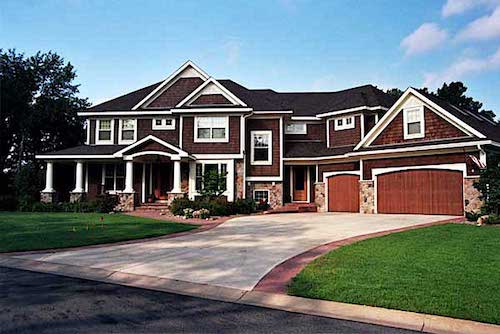 Very asymmetrical and usually two stories, Shingle homes can also feature gambrel roofs and windows and doors without any ornamentation. One of the most famous shingle style homes is Teddy Roosevelt’s Sagamore Hill. Other defining characteristics of the style:

• Pillars or columns that support the wide porch

• Horizontal rows of windows that allow plenty of light 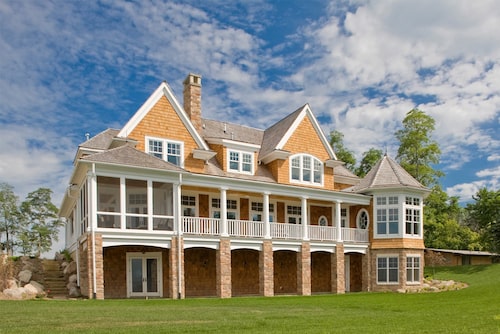 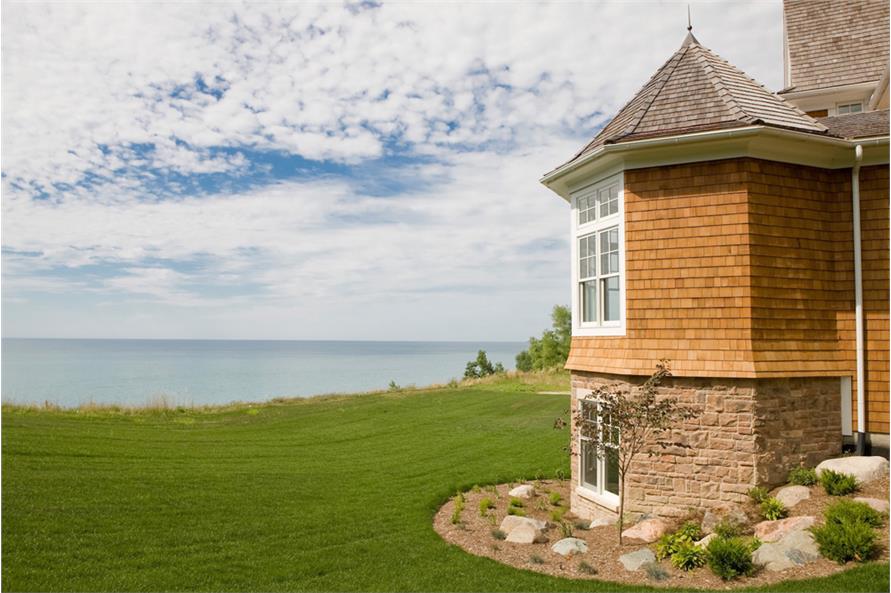 Top: Wouldn’t you love to spend a summer in this magnificent Shingle style home? The sprawling 2-story, 4,580-sq.-ft., 5-bedroom, and 5-bath home has a wrap-around porch, and the covered, screened-in rear porch shown here runs the full width of the house, with a sheltered area below it, all of which enhances outdoor living. Bottom: The home’s turret at one end of the rear porch boasts a great view of the ocean (Plan #168-1132).

Whatever your New England style is, be sure that it’s a “forever” home design you truly love and, most importantly, one that fits your needs and lifestyle.

Footnote: The bottom left photos in the lead image of this article is a beautiful 2-story, 4-bedroom Colonial style home. For more details, go to Plan #146-1263. 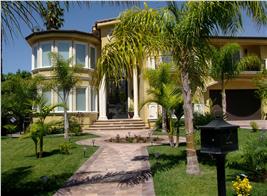 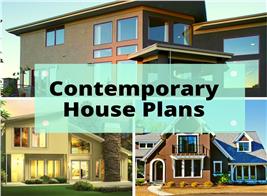 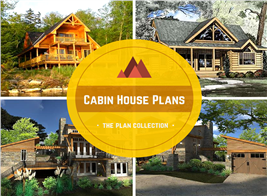