Home > Blogs > Thomas Jefferson: The Architect and The Landscape Artist 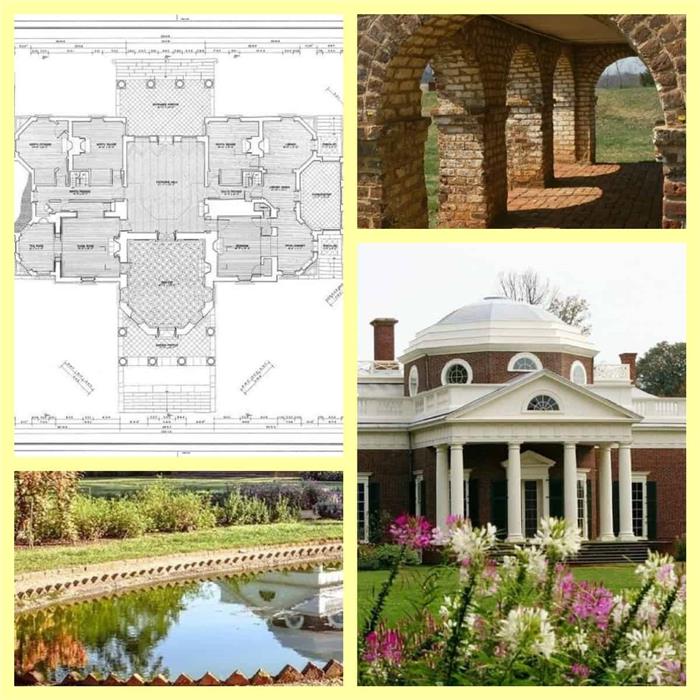 His Influences Beyond Politics and Government

How much do people really know about Thomas Jefferson? Of course we all know he was the third U.S. President, influential Founding Father and principal author of the Declaration of Independence. But, did you know he was one of America’s first and finest architects and landscape artists?

Although not professionally trained as an architect, Jefferson had an eye for design and a keen interest in the subject.  He also read voraciously about architecture and took advantage of every opportunity to learn about the discipline through books and his extensive travels to the Northeast and Europe. Jefferson was heavily influenced by Italian Renaissance architect Andrea Palladio and by French Neo-classical buildings. When he served as U.S. Minister to France, he studied and observed the works of European architects; and was attracted by the French’s emphasis on comfort, convenience and privacy.

As an architect, Jefferson used the octagon and octagonal forms as design patterns, at times “elongating them, halving them, and employing them in whole as with the dome of Monticello, or the entire house at Poplar Forest.” He loved white painted columns and trim as well as classic moldings, Chinese railings, red bricks, and portico-and-pediment primary entrances. In addition to his influence on architecture for government buildings, Jefferson’s legacy contributed to the popularity of Federal and Georgian architecture in American house design. Other notable features were the elevation of the main floor above ground level and hidden stairs instead of grand stairways.

Monticello, Jefferson’s “essay in architecture” took more than four decades to complete. He started building it when he was 25 years old and the final touches were done when he was 80. Over the years, Jefferson expanded, renovated and re-imagined the historic home as his tastes in architecture developed and evolved. The finished product is a monument to his interest in architecture, landscaping, agriculture and domestic comforts.

In 1769, Jefferson started building his house on the plantation he inherited from his father. Located on top of a hill, the “first Monticello” was an eight-room house designed according to the principles of Palladio.  When he began enlarging the house, he incorporated ideas from the French such as the dome, tall windows, and skylights to illuminate interior spaces.

By 1809, the eight-room house was transformed into a 21-room mansion. The main floor was elevated and centered on a pavilion with a white-columned portico and a low dome. Jefferson moved the front wall forward to provide space for two new rooms on each side of the two-story entrance hall. He also installed a weather vane on the East entrance equipped with an indicator that was visible from the front windows. 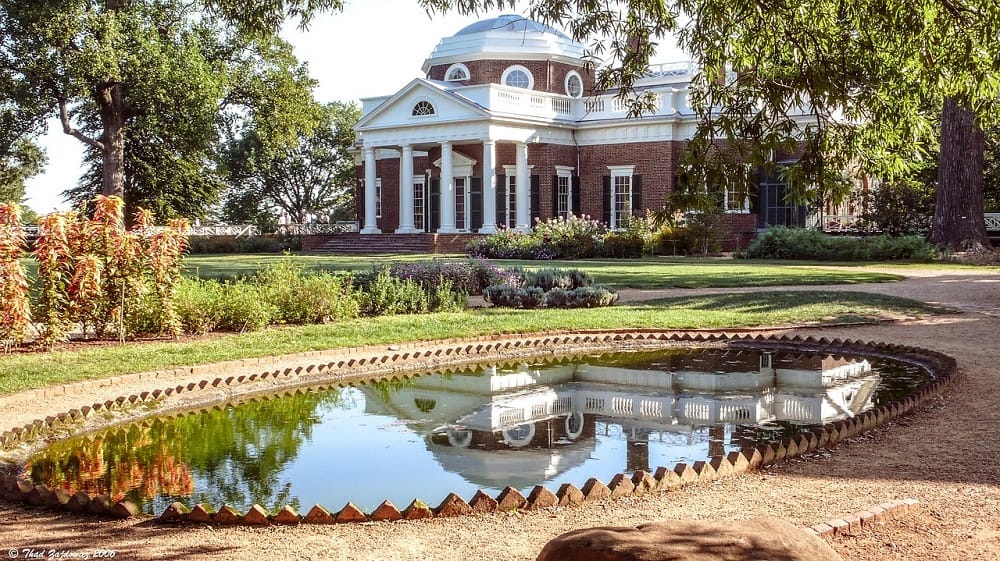 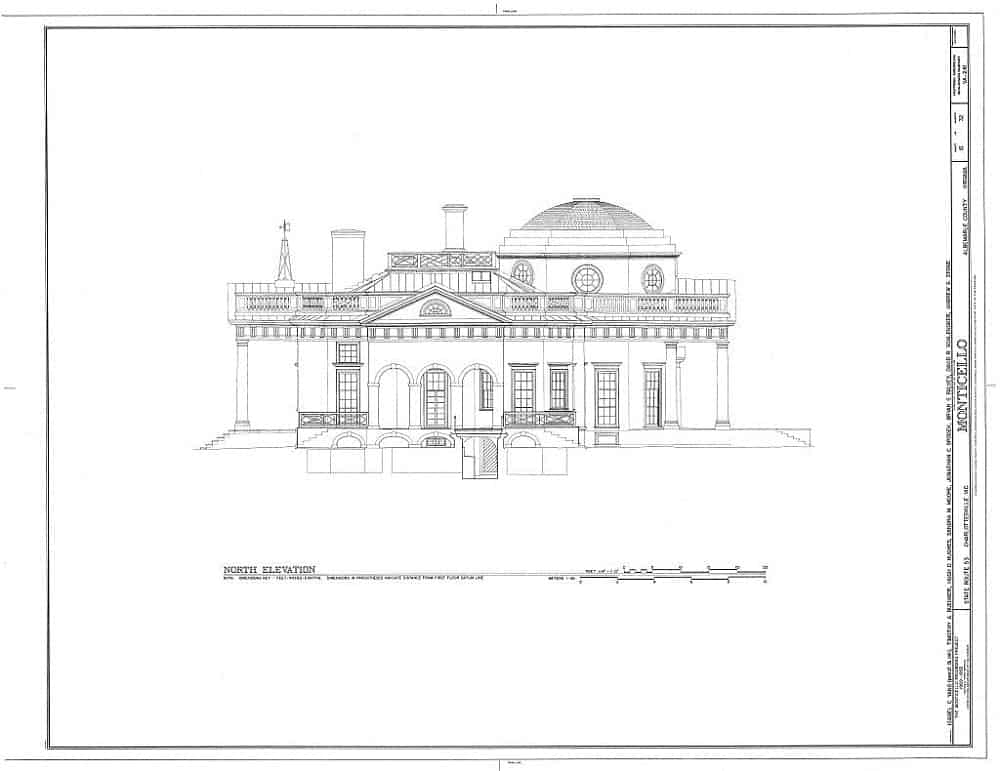 These blueprints show the level detail that went into designing Monticello by Thomas Jefferson - both the exterior and interior of the home. Above, is the North Elevation of Monticello. Below is the floor plan for the first floor.
(Image credit: Monticello blueprints, Historic American Building Survey) 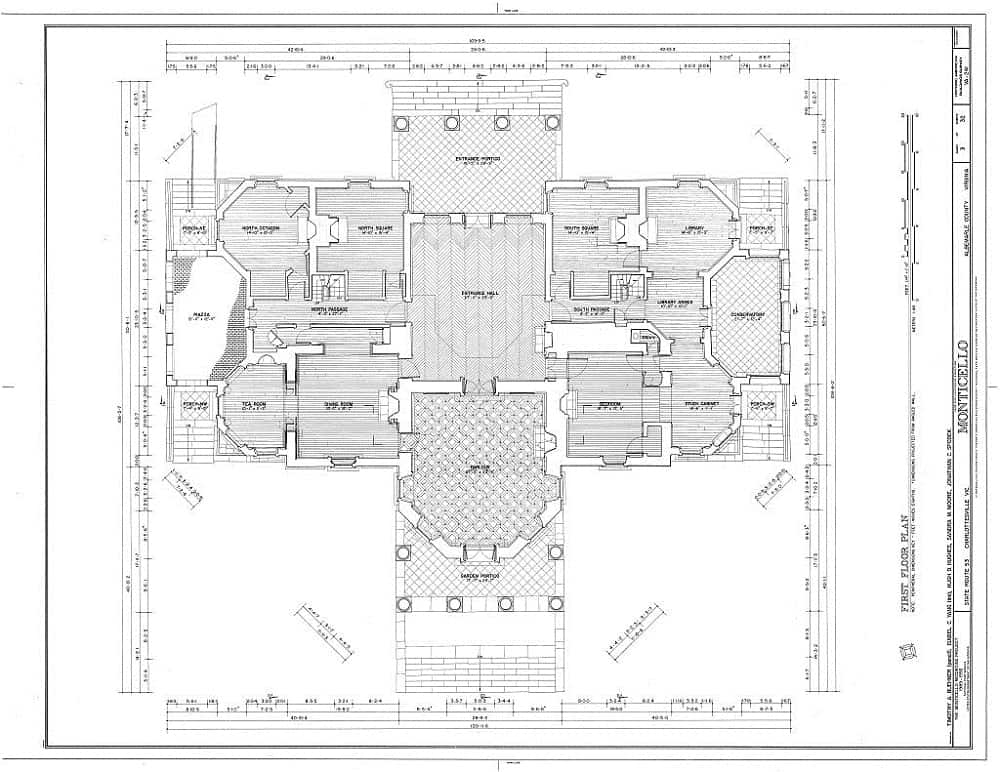 With an eye toward convenience, Jefferson built folding doors, bookshelves that became storage boxes, beds that folded into walls, and dumbwaiters connecting the dining room to the wine cellar. Another example of his inventiveness was on display in the entrance hall: a clock that also marked the days of the week. 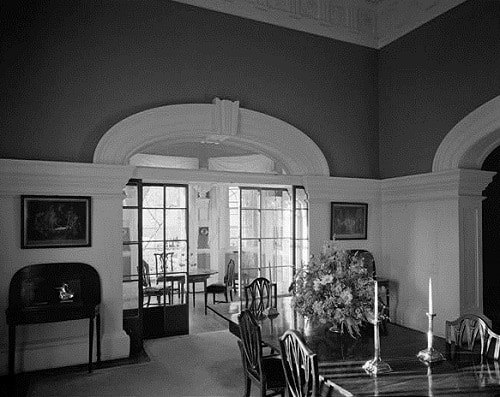 The Tea Room ypified Jefferson’s fascination with octagonal shapes. It served as a dining area and Jefferson’s reading/writing corner.   The Dining Room (above) with skylight and double doors separate it from the Tea Room (as seen through the double doors in the photo).
Photo credit: Historic American Building Survey) 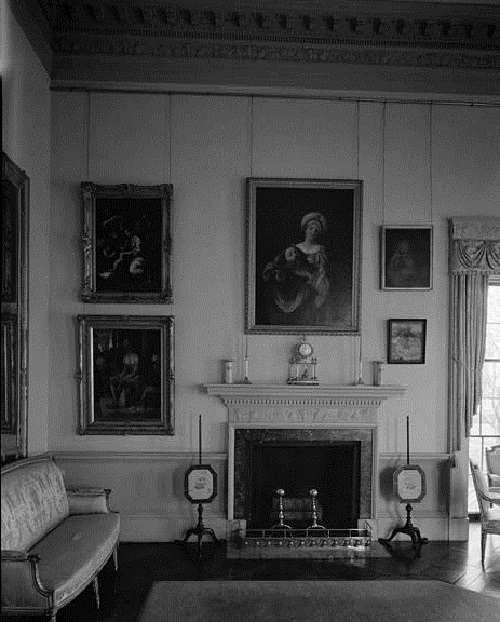 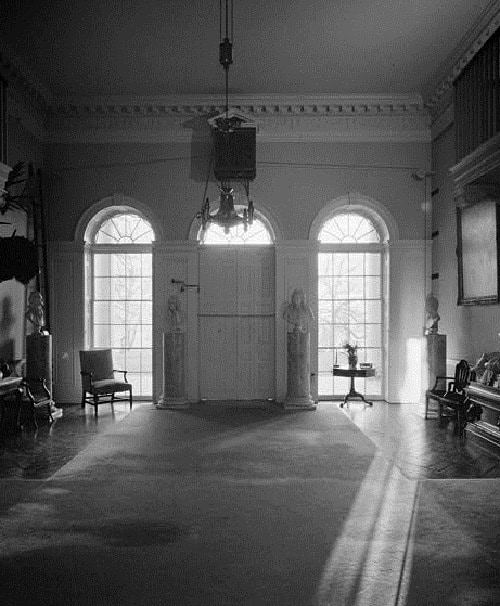 The Entrance Hall was used as a waiting room/reception area. It was adorned with Indian artifacts, paintings and sculpted busts.
Photo credit: Historic American Building Survey)

The Gardens at Monticello

Not satisfied with just creating an architectural masterpiece, Jefferson turned his attention to the vast acreage around Monticello. The landscape artist went to work and designed magnificent gardens to match the grandeur of the mansion. Jefferson incorporated gardening traditions from England, France, Spain, West Africa, the Mediterranean, and Creole culture. He planted flowers, a grove of ornamental and exotic plants, trees, fruits and vegetables.

The result? A true botanic showpiece, a source of food and an experimental laboratory of plant species brought over from Europe and around the world. Today, the gardens of Monticello have been restored to their former glory. 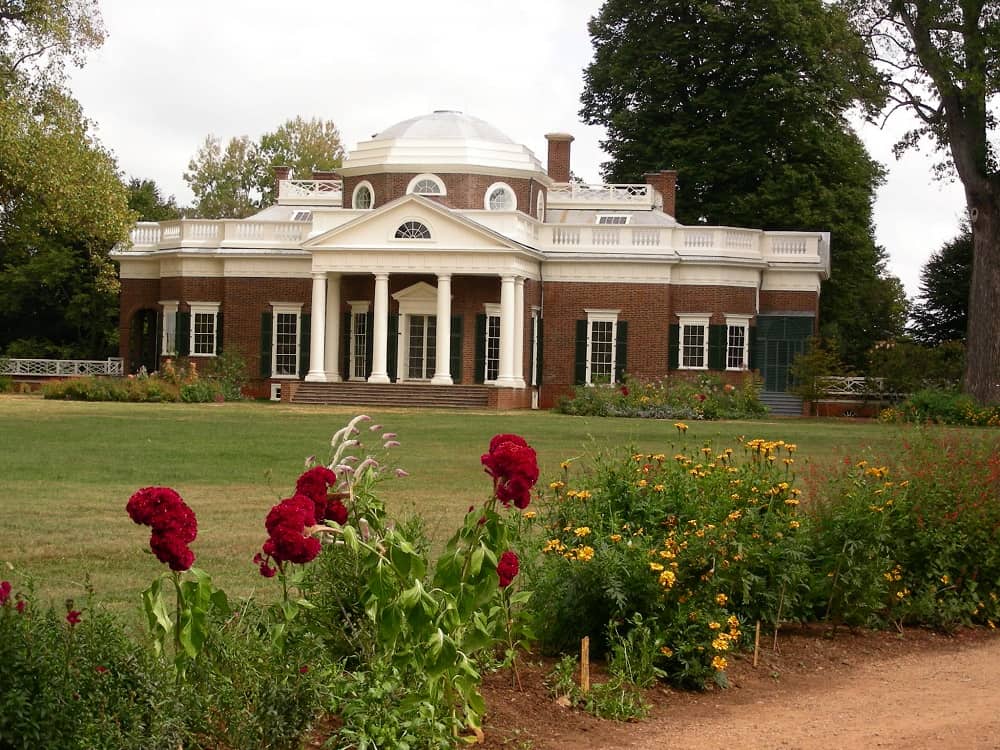 Incredibly, Jefferson looked for a retreat away from Monticello – one that he acquired through his marriage. Poplar Forest - a 4,800-acre plantation near Lynchburg, Virginia – offered him a quiet and serene place away from the pressures of public life.  Poplar Forest, with its elegant geometrical design, is described as the “purest of his Neoclassical architectural masterpieces.”

Octagonal in shape, it is a one-story house set on a high basement and has most of the features of Jeffersonian architecture: symmetry, classic porticoes with pediments and white columns, red bricks, and polished floors. Jefferson liked octagonal rooms partly because they provided an abundance of light.

During Poplar Forest’s construction, Jefferson said that when finished “it will be the best dwelling house in the state, except that of Monticello.” For Jefferson, Poplar Forest was the place where he found rest, leisure and private time with his family.

Jefferson gave the villa retreat to his grandson Francis Eppes as a wedding present. Unfortunately, Eppes and his bride moved to Florida and sold the plantation in 1828. Over the years, Poplar Forest underwent various alterations by different owners. In 1984 the Corporation for Jefferson’s Poplar Forest bought the house and 50 acres of land. In 1986, the Corporation started restoration work to return Poplar Forest to the state it was when Jefferson was in residence. 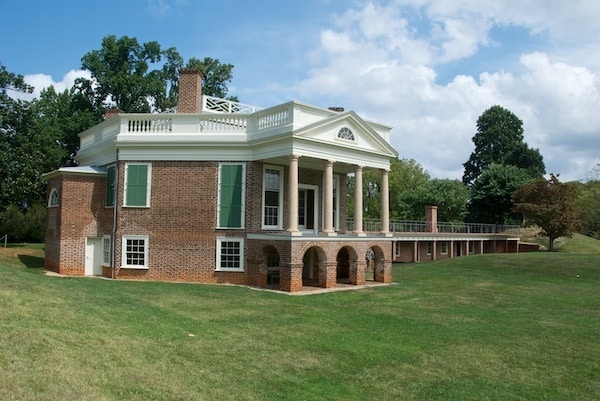 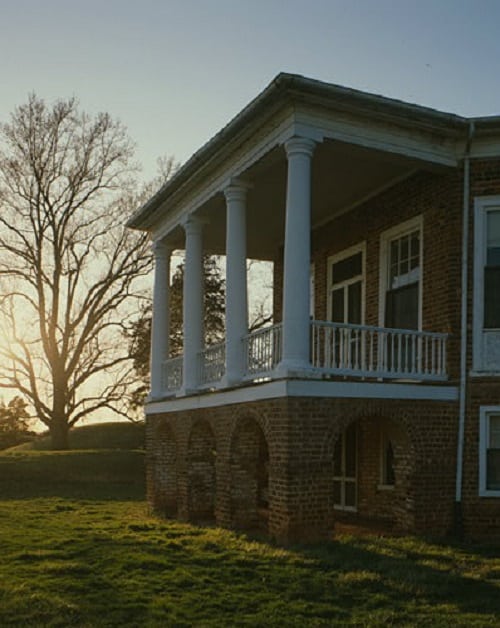 Designing the University of Virginia

Jefferson was 70 years old when his concept of an “Academical Village” where students lived in close proximity to professors and their classrooms, became a reality.  Between 1814 and 1826, Jefferson designed and supervised the construction of the university of his dream – the University of Virginia at Charlottesville.

The Pavilions of the Lawn - an elongated terrace that extended to the south for almost two acres – flank it on the east and west. The 10 red brick two-story buildings create a symmetry – with five on each side – but have different styles, facades and decorative details. Their designs were meant to serve as models of different styles of ancient architecture. Connecting the pavilions are low colonnades fronting student dormitories. 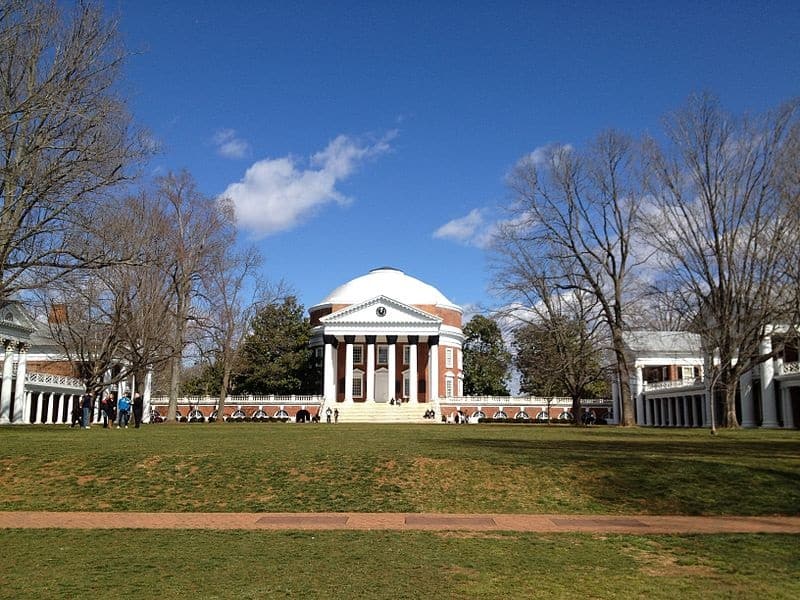 The Lawn – facing the Rotunda with Pavilions I and III on the left and and Pavilions II and IV on the right.
Photo credit: Rotunda at the Univ of Virginia by Eric T Gunther under CC BY-SA 3.0) 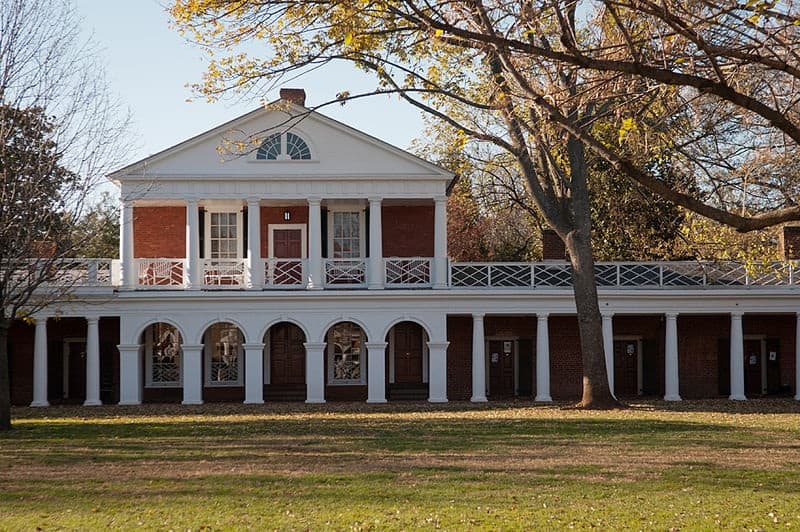 Above, Pavilion VII – the oldest – has an arcade for the first floor and an upper story portico, It is the only Pavilion with an arcade.
(Photo credit: Pavillion VII, Academic Village UVA by Montesbradley under CC BY-SA 3.0)

The domed Rotunda – situated at the north end of the Lawn - was the focal point of the “Academical Village. ” Inspired by the Pantheon in Rome, it had windows and steps in the front and housed the library.

Jefferson’s design for the sprawling campus of the University of Virginia is regarded “as one of the outstanding accomplishments of American architecture.” The New York Times said it “was incomparably the most ambitious and monumental archiectural project that had or has yet been conceived in this century.” And the American Institute of Architects called it “the proudest achievement of American architecture in the past 200 years.”

Working with French architect Charles-Louis Clerisseau in 1786, Jefferson conceived the design for the new state capitol building in Richmond, Virginia. It was patterned after the Maison Carree, an ancient Roman temple built early in the Christian era at Nimes in Southern France. To differentiate it from the model, Jefferson and Clerisseau used Ionic columns instead of the more ornate Corinthian columns.

The original building survived the American Civil War but not a tragedy in 1870 over the leadership of the Richmond government. In April 1870, the Virginia Supreme Court of Appeals held a hearing in the large courtroom on the second floor. With hundreds of spectators crowding in to watch the proceedings, the balcony gave way and fell to the courtoom floor, causing the entire floor to collapse and fall into the House of Delegates Chamber.

Despite demands to demolish the building, the damage from 1870 was repaired and in 1904 two wings were added to the East and West ends of the Capitol to allow much needed space for the growing legislature. 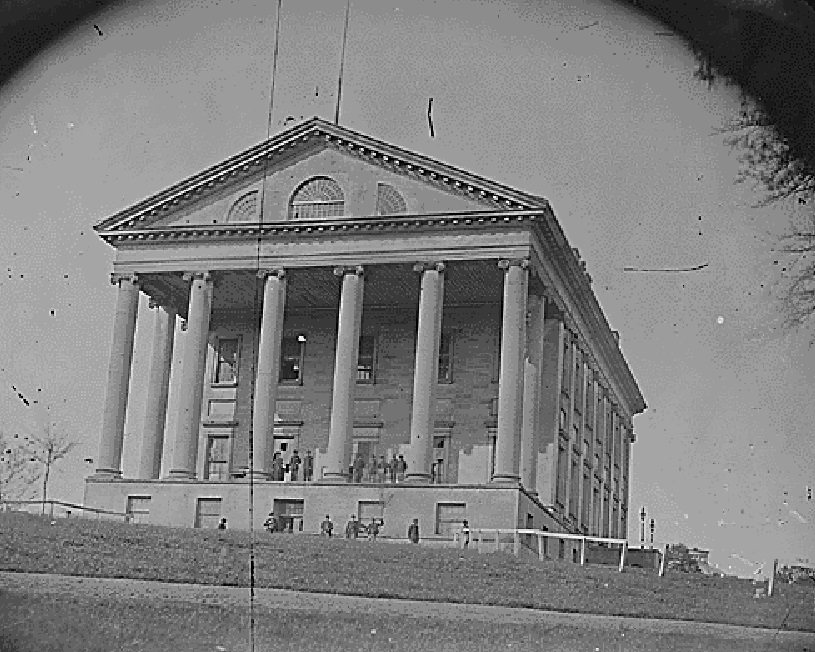 The Virginia State Capitol in April1865 (above) was modeled after the Maison Carree (pictured on the right).
Photo credit: Brady National Photographic Art Gallery) 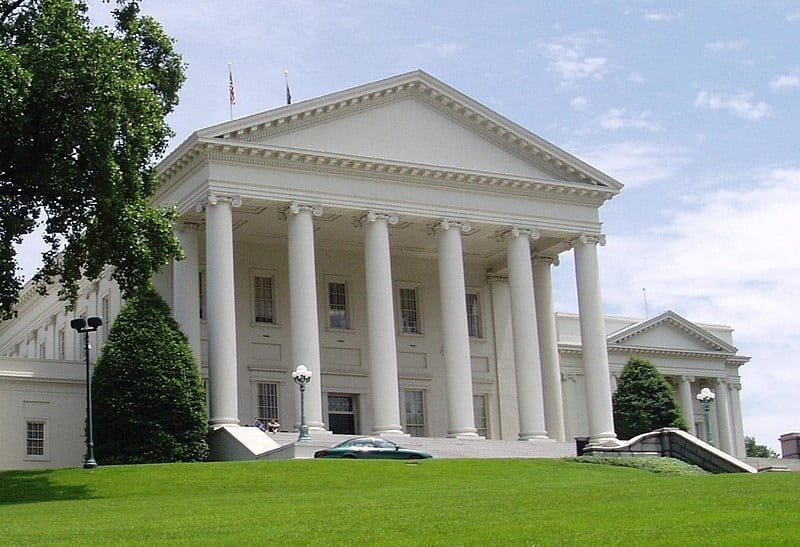 The Capitol as it stands today has additional wings on each side. Inside the Rotunda is a statue of George Washington.
(Photo credit: Va State Capitol by Anderskev under CC BY 3.0)

Just as he left a mark in the political history of the United States, Jefferson influenced early American architecture. He went on to design several homes for friends and other important public buildings in Washington, D.C. and Philadelphia.

Through the mid-20th century many church designs on the East Coast still had traces of Jeffersonian architecture. Some college campuses in the South, particularly in his home state of Virginia and the Peabody College campus of Vanderbilt University also reflect his influence. Many residential architectural designs also adopted traces of Jeffersonian arhitecture. These can be seen in many house designs in Viriginia and other parts of the South.

The styles and grandeur of Monticello and Poplar Forest along with their magnificent gardens and landscapes are timeless monuments to Jefferson’s architectural acumen. 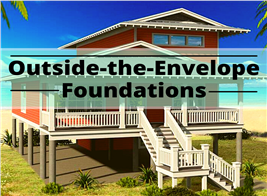