One of the hidden treasures of Virginia’s Presidential Trail, Montpelier – the ancestral Southern plantation style home of President James Madison, the fourth president of the U.S. – sits on a 2,650-acre expanse on the foothills of the Blue Ridge Mountains and an unobstructed view of the Shenandoah Valley. Not as famous as George Washington’s Mount Vernon and Thomas Jefferson’s Monticello, Montpelier is comparable in stature and holds as much lore, history, and charm as these presidential residences.

While Madison did not always live in Montpelier, he grew up there and spent his retirement years (1816–1836) at the plantation mansion with his wife, Dolley, whose charm and diplomacy turned their White House into a not-too-formal environment and a place of genuine hospitality.

From the mid-1760s to the mid-1930s, Montpelier would undergo several expansions and renovations initiated by the Madisons and other owners of Montpelier, including the prominent duPont Family. In 2003, the National Trust for Historic Preservation spearheaded a five-year $24 million project to restore Montpelier to the way it looked during President Madison’s retirement years. 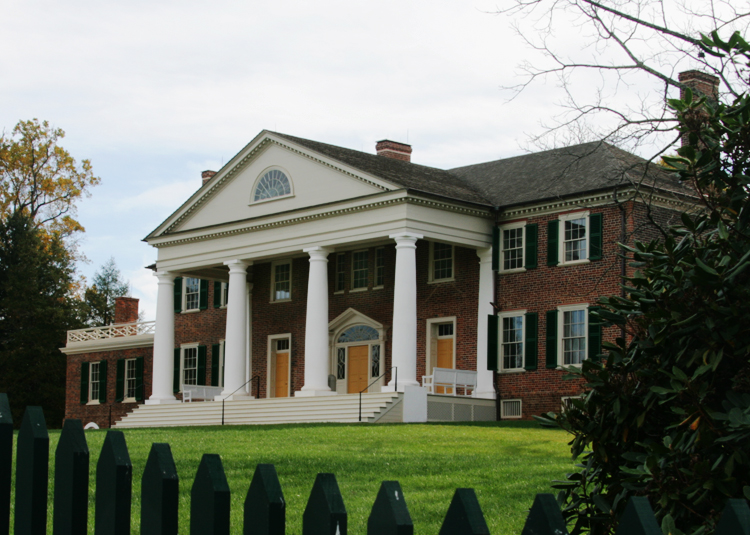 Top: At Montpelier’s reopening in 2008, Supreme Court Chief Justice John G. Roberts declared from its front steps: “If you’re looking for Madisons monument, look around.” With the new Montpelier, President Madison is finally getting the recognition he richly deserves (photo credit: MadisonsMontpelier by Aigrette under license CC BY-SA 3.0). Bottom: A view of Montpelier’s sprawling expanse (from the the second floor of the front of Madiaons home) includes ranch, forests, and farm land – and a view of the Blue Ridge Mountains (photo credit: Montpelier Blue Ridge by Calstanhope under license CC BY-SA 4.0).

Style of the South

President Madison’s Montpelier is a fine, if understated, example of the architecture popular in Southern states – the plantation mansion. But it didn’t start out that way. The original house built by Madison’s father was a brick Georgian style home – a two-story brick structure with symmetrical window placement and a small portico with a pediment. Before he inherited the house, Madison remodeled the house to accommodate his family while his parents still lived there. After inheriting the home, he added to the structure and remodeled it again.

With Madison’s additions after taking ownership, the house was transformed into the typical plantation style of Southern homes:

• Large two-story main structure, often with wings on either side 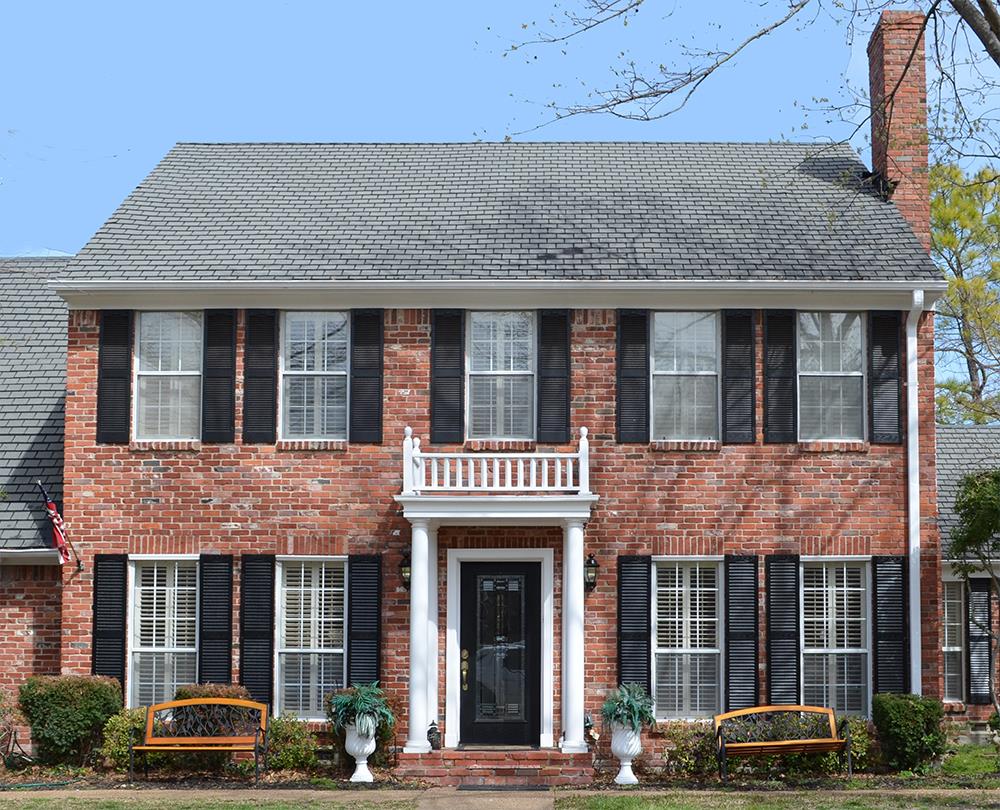 This classical example of a Georgian style home design looks very much like the original Montpelier would have appeared (Plan #195-1119). Some differences: Montpelier had a pediment-style portico and a hip roof. 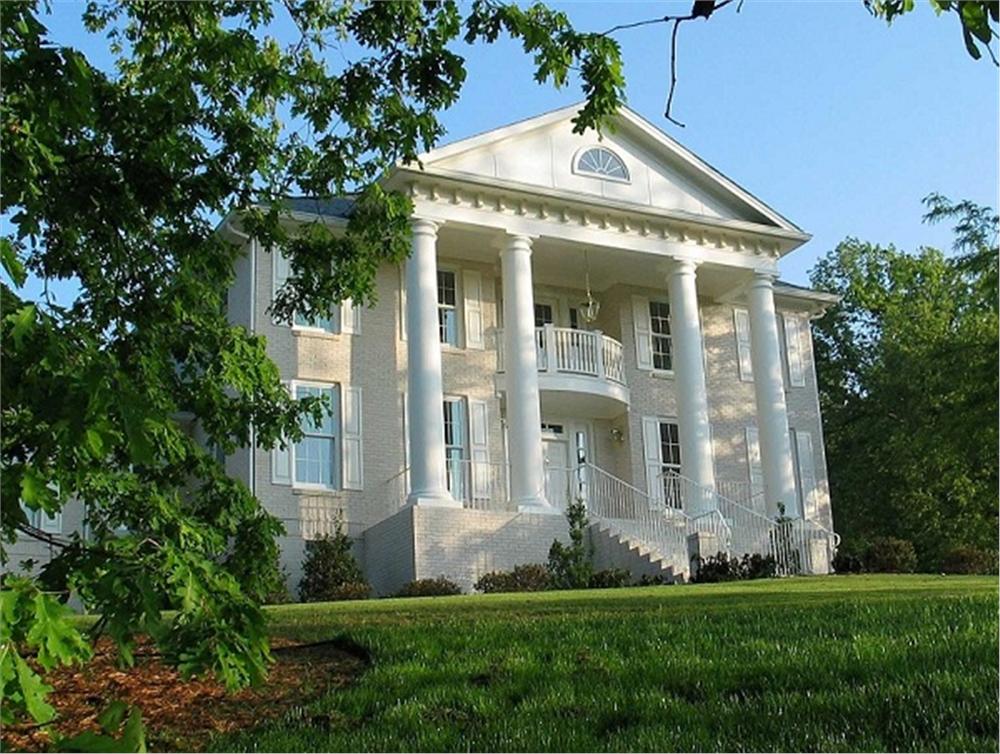 While the National trust “inherited” Montpelier in 1983 and took possession of the estate in 1984, it took almost 20 years to start its restoration to the Madison Era. The lack of funding in the early years made it difficult to maintain, preserve, and explain Montpelier – and rediscover its identity.

Things changed in 2000 when the Montpelier Foundation became steward of the property and partnered with the Paul Mellon Estate to conduct research, architectural and archaeological explorations, a feasibility study, cost estimates, and a restoration schedule. After two years of extensive research, the team had enough information to move forward with the ambitious project of restoring Montpelier.

In 2003, the major project began – a process that took three years and successfully recaptured the spirit of the man who called it home for most of his life. 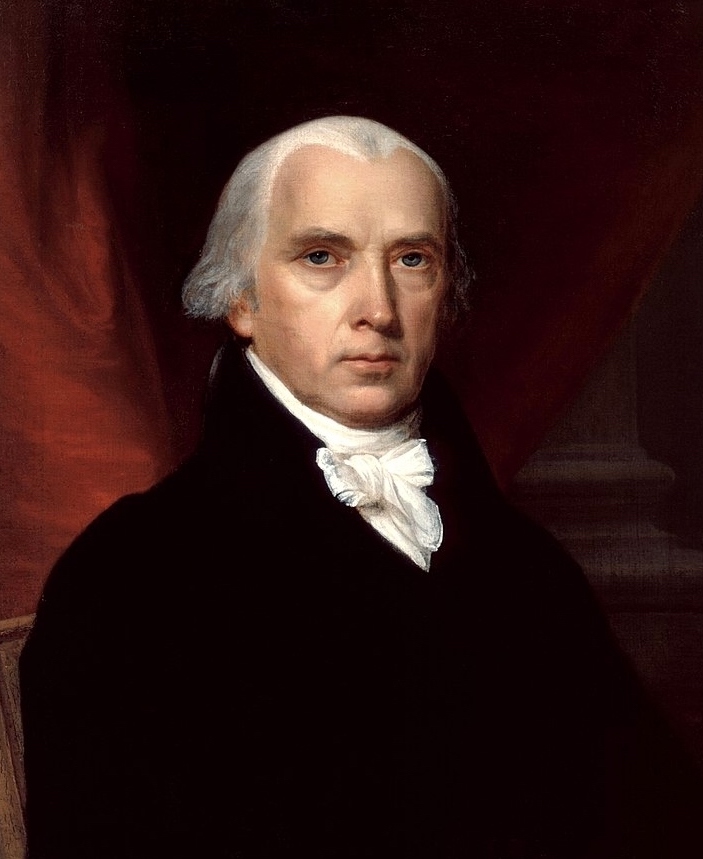 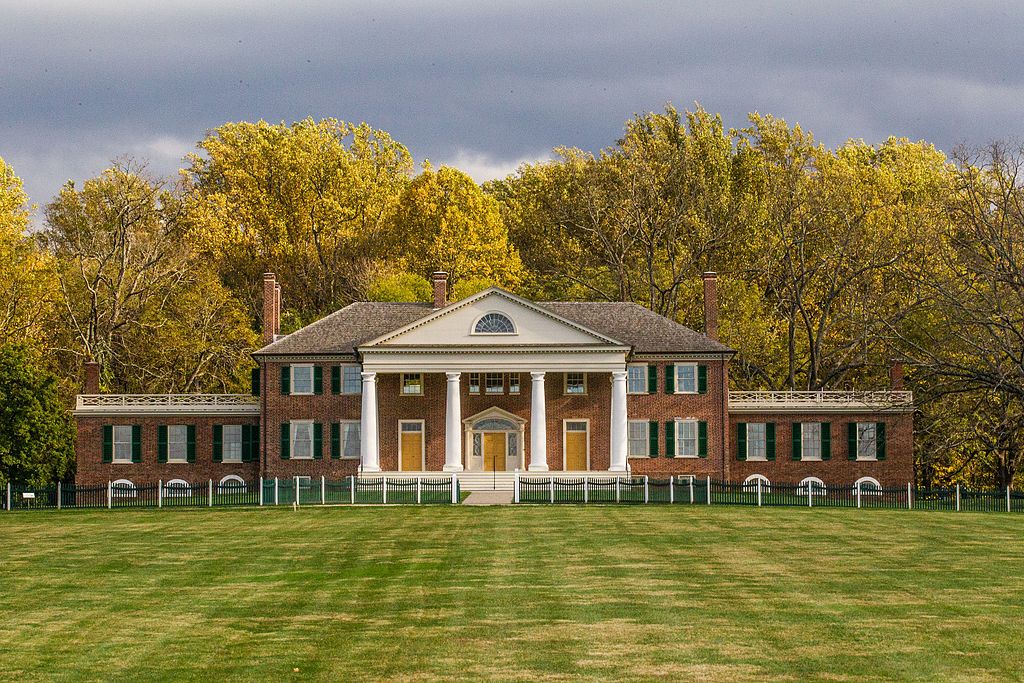 Top: A portrait of James Madison, fourth President of the United States and one of the Founding Fathers of the country (photo: Public Domain). Bottom: A photo of Montpelier as it looks today (photo credit: KROW by Pthomaskmadigan under license CC BY-SA 4.0). 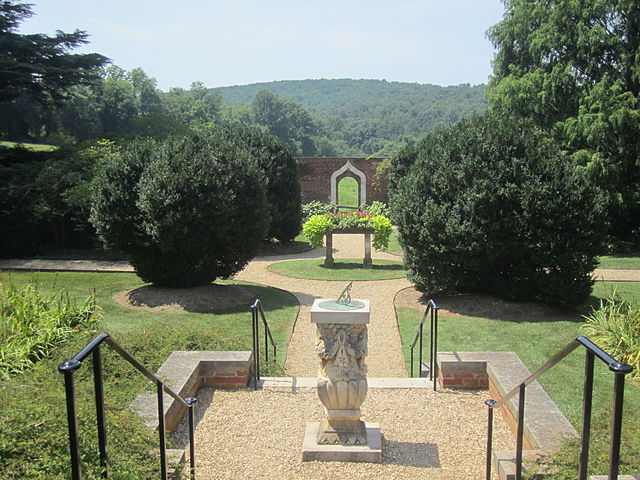 Entrance to the gardens at Montpelier as seen today (photo credit: Gardens at Madisons Montpelier by Billy Hathorn under license CC BY 3.0).

Built around 1760 by James Madison, Sr. and the family’s enslaved force, Montpelier was originally designed as a classic two-story brick Georgian house with the covered portico, simple symmetrical façade and windows. It was completed in 1764 and located about half a mile from the old Mount Pleasant plantation settled by President Madison’s grandfather Ambrose.  The new house was one of the largest in Virginia’s Piedmont frontier – and named Montpelier by the president’s father.

The most impressive spaces of the 1764 Montpelier were the parlor and dining area, which were situated at the front of the house. There were doors on opposite ends of a central passage and stairs enclosed between the passage and a bedroom. It is believed that slaves cooked the family’s meals in a separate kitchen and carried them to the dining room through a back entrance or a bedroom.

In 1797 Madison retired from Congress and returned to Montpelier with wife, Dolley, where he proceeded to add a separate residence with its own front door on one side of the house to accommodate him and his family. A floor plan (see below) shows a dining room and a parlor. Following the symmetry of the original design, Madison added two bedrooms on the second floor.

He also built a sizable portico with four columns and a pediment that covered the two front doors of Montpelier. The portico – which created a contrast with the red brick façade – served as the focal point of the home.

There were more renovations to come after Madison was elected president in 1808.

Although Madison inherited the plantation in 1801 after the death of James, Sr., his plans to remodel Montpelier did not start until 1809, a year after his election to the presidency. His plans included the combination of the two residences into one huge house. To accomplish this, all of the windows were replaced; a wing was added on each side of the existing structure; and the two front doors were torn down to build one main entryway. By gutting down the parlor, a lobby was created in front of a drawing room.

The South Wing of the mansion was turned into the exclusive residence of the President’s mother – Nelly Madison. The North Wing was devoted to James and Dolley Madison.

After 1812, the Madisons did not make any other changes or renovations to Montpelier. During his retirement years, the President became a gentleman farmer – growing wheat and tobacco at Montpelier, raising livestock, and overseeing the plantation. 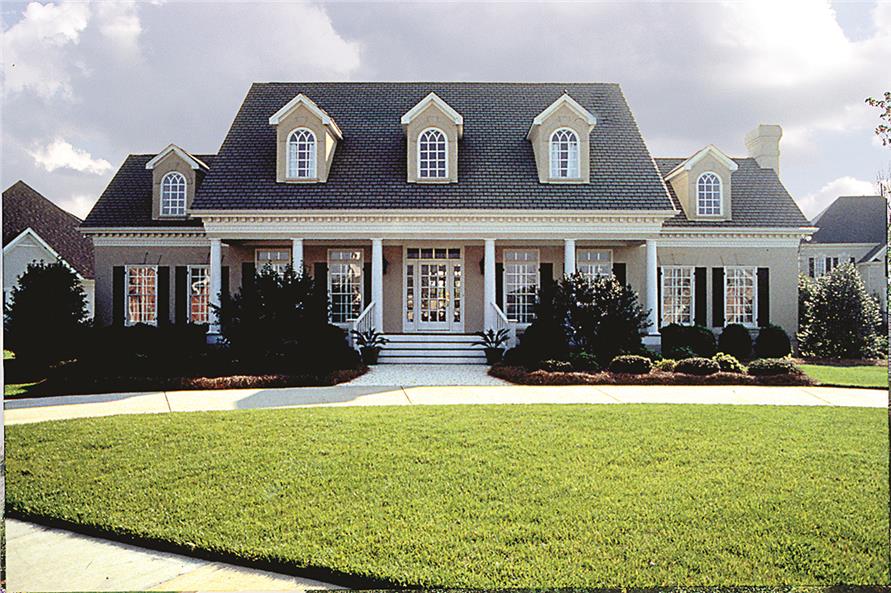 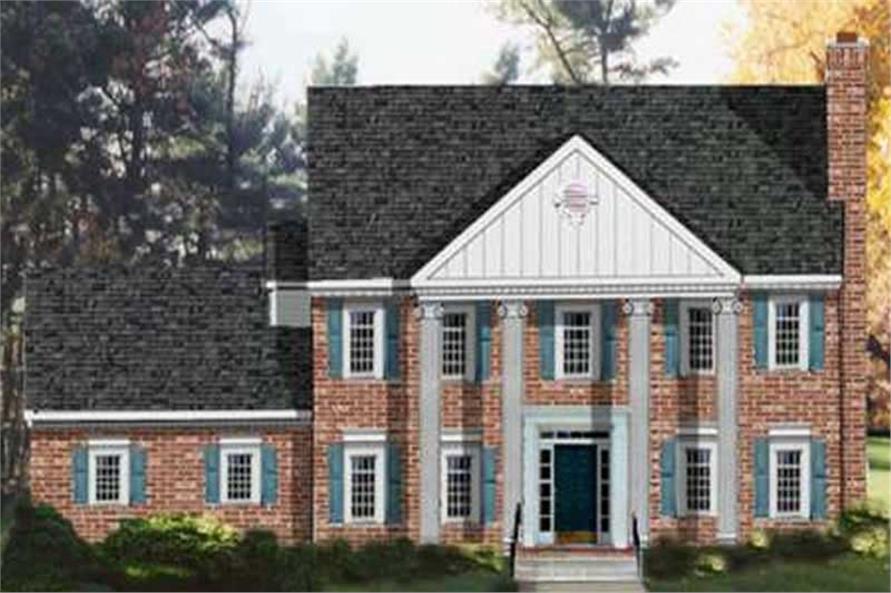 Montpelier After the Madisons

In 1837 – a year after she was widowed – Dolley Madison moved to Washington, D.C., and left the management of Montpelier to Payne Todd, her son from her first marriage. Mrs. Madison eventually sold Montpelier in 1844 to Henry Moncure, a merchant from Richmond to pay for the debts accumulated by Payne

From 1844 until the duPont Family acquired Montpelier in 1901, the plantation passed through six owners, a number of whom made changes to its exterior and interior structure. Records show that Benjamin Thornton who purchased Montpelier in 1848 made considerable changes to the portico: replacing the roofs on the wings, covering the exterior walls with a granite colored stucco, and making extensive changes to the landscape that surrounded the Mansion. After Thornton’s renovations, no other major renovations were made by Montpelier’s owners until the duPont Family took over the mansion.

Montpelier and the DuPont Family

The duPonts were horse enthusiasts and among a number of wealthy families in the Upper South who were influential in the development of Thoroughbred racing in the U.S. When they purchased Montpelier in 1901, they enlarged the mansion from 22 rooms to 55, covered it with pink stucco, and built stables and barns. The North and South Wings were extended and raised to two stories.

William duPont maintained the portico and the look of Montpelier’s lobby and drawing room but changed the configurations of most of the rooms and remodeled them to suit his family’s interests and hobbies. For example, the Madisons’ dining room became a billiard room; Mrs. Madison’s bedroom was converted to a secondary kitchen; and Nelly Madison’s reception room was expanded and turned to a smoking room. 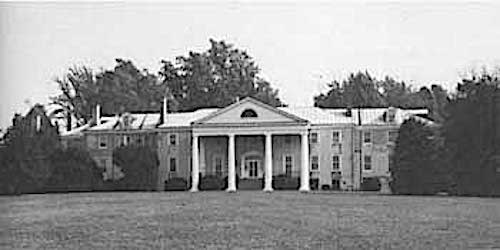 A bigger Montpelier took on a pink stucco look (though not apparent in this National Park Service black-and-white image from 1975) when the DuPont family purchased it in 1901 and made renovations to the plantation home (photo: Public Domain).

Marion DuPont Scott – William and Annie’s daughter – inherited Montpelier in 1928 and improved the gardens and landscape around the estate while preserving their core. She and her brother established the Montpelier Hunt Races in 1934 and held them on the grounds. Montpelier’s natural hedges were used for the steeplechase jumps. (The races are still held every year in November.)

In 1936, when Marion married actor Randolph Scott, she converted Nelly Madison’s cellar kitchen into an exercise room for him. About the only significant change she made to Montpelier’s interior was remodeling her parents’ music room and creating the Red Room – an Art Deco space that featured a glass fireplace, a red weather vane on the ceiling, and a gallery of trophies and photographs of equestrian-related events.

Mrs. Scott lived at Montpelier till her death in 1983 – and bequeathed the estate to the National Trust for Historic Preservation – with a wish for its Madison Era restoration.

As we celebrate Presidents’ Day, we pay tribute to President James Madison and Montpelier, a fitting monument to the Father of the Constitution who formed the ideals of a nation.