“Girl Power” in the 1900s: The First Women Architects Find Success in a Man’s World 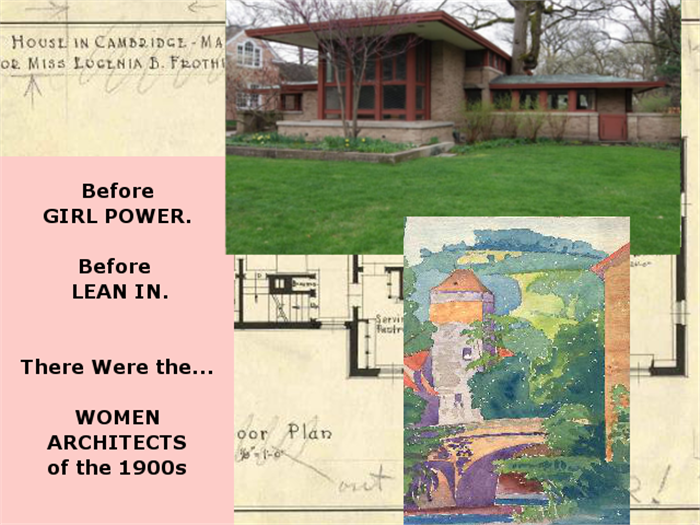 The First Women Architects Find Success in a Man’s World

Aware of - but unfazed by - a male-dominated profession, the first women architects in the U.S. and their remarkable colleagues etched their names in the architectural and leadership fields – and history.

These women pioneers of the early 1900s learned from private tutors first, then broke all-male barriers at prestigious architectural and design schools, such as Columbia and MIT. When they set out into the architectural field to seek work, some of them apprenticed with Frank Lloyd Wright or at established firms. Importantly though, a number of these pioneering women demonstrated early on their will to lead and take risks by applying for and accepting their own commissions, venturing on their own as independent practitioners, and founding women-led and managed architectural firms.

An article in The New York Times (March 8, 1914) touts the partnership of Anna Pendleton Schenk and Marcia Mead as the “first of its kind.” But Schenk and Mead were actually behind Mary Gannon/Alice Hands and Lois Lilley Howe/Eleanor Manning in opening the first all-women architectural firm in the U.S.

Unfortunately, only scant historical records exist about Mary Nevan Gannon and Alice Hands, who formed the first architectural firm in New York City in 1894. However, it was known that they were concerned with urban poverty – inspiring them to design cost-efficient apartments. Gannon and Hands also built cottages in the Catskills and Jersey Shore.

New York wasn’t the only city where women were making inroads in architecture. In Boston, three women would eventually form one of the first and most productive all-women partnerships.

In 1894, Lois Lilley Howe of Cambridge, MA, received her first commission for a residential project. Prior to that, Howe – who completed a two-year “Partial Architecture” course at MIT in 1890 - worked as a draftsman at a Boston firm. When Howe placed second – behind MIT classmate Sophia Hayden - in a nationwide design contest for the Women’s Building at the 1891 Chicago Columbian Exposition, her career took off.

By 1900, she was established in the Boston-Cambridge area as an architect with her own practice and staff. Perhaps it was providential that one of her draftsman was another MIT architecture graduate – Eleanor Manning of Lynn, MA.

Eleanor Manning (O’Connor) graduated from MIT in 1906, then joined Lois Howe’s firm as a draftsman in 1908. After four years with the firm, she took a leave of absence and traveled to Europe, where she created watercolor paintings of buildings and structures that caught her interest. When Howe offered her a partnership in 1913, Manning returned to Boston to begin what has been described as the “longest-lasting and most prolific women’s architectural firm.” It was the first all-women partnership in Boston and the second in the country. 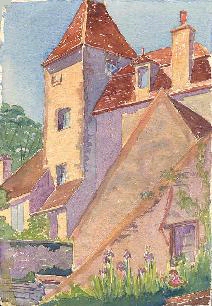 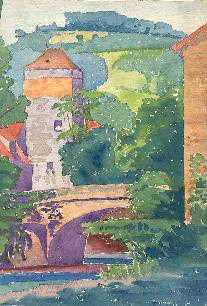 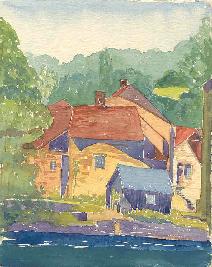 Much like Gannon and Hands in New York, Howe and Manning also took on the problems of urban housing, in addition to their residential commissions. As Manning drew the blueprint for the first public, low-income housing in South Boston, Howe concentrated on designing small, affordable homes in the suburbs. Both Howe and Manning devoted as much time, effort and attention to detail to their public housing projects – making them as homey and appealing as their other private residence assignments. 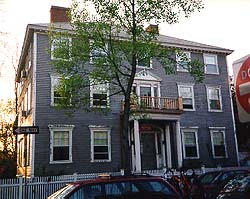 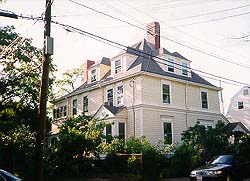 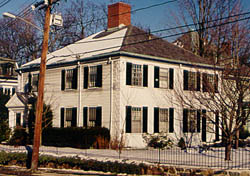 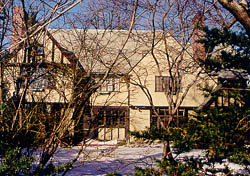 The firm flourished; in 1926, Howe and Manning added another MIT graduate to the partnership. Joining them was Mary Almy of Beverly, MA, a graduate of Radcliffe College, who built a summer home for her family before she studied architecture at MIT.

Mary finished her degree at MIT in 1919, then immediately went abroad to work at a London-based architectural firm. When she came back in 1921, she signed on as a draftsman at Howe and Manning, her fellow MIT graduates.

A Focus on Colonial Revival

According to their papers stored at MIT, Howe-Manning-Almy ran a very successful firm that accepted commissions on both residential and commercial spaces. They were noted for their Colonial-revival designs and the charming American homes they built. The women also did renovations and revisions of outdated structures – a process described by Manning in their papers as “renovising.” 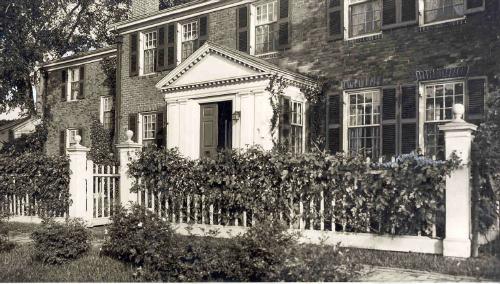 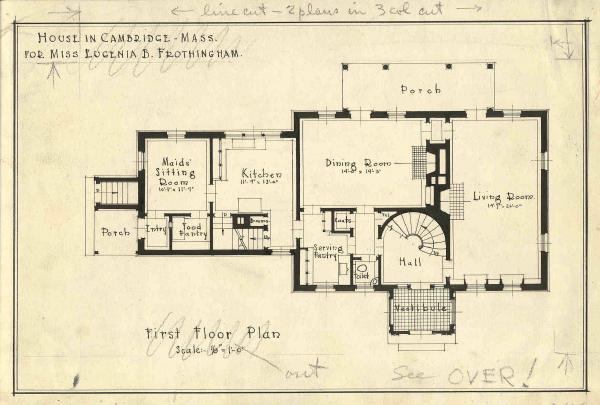 The partnership lasted until 1937 – surviving the Great Depression but not Howe’s retirement at age 73. Manning got married in 1931 to Johnson O’Connor, founder of the Johnson O’Connor Research Foundation. She and Almy continued to work as individual architects and were involved in other activities.

The “Girl Architects”—Schenk and Mead

Anna Pendleton Schenk and Marcia Mead graced the front page of The New York Times in 1914 as the “girl architects” who organized a firm “expected to show that women need only opportunity to be real home builders.” 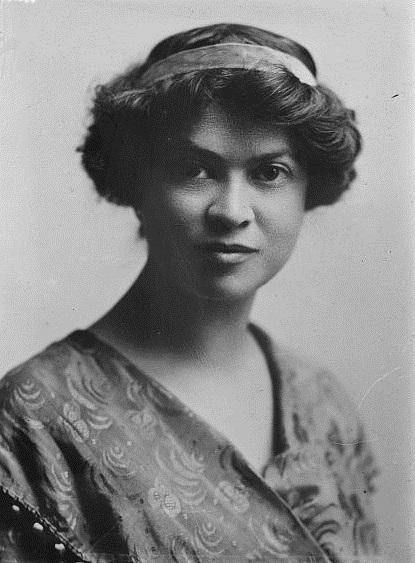 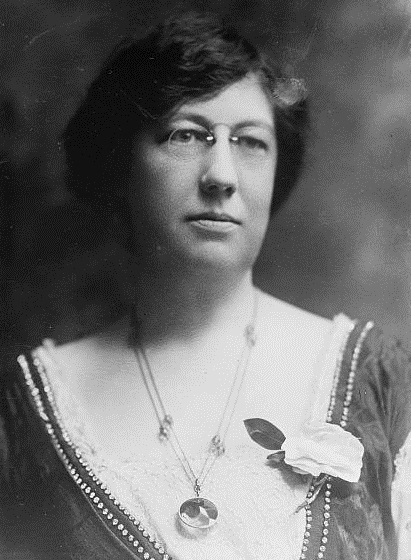 Mead, the first woman to graduate from Columbia University’s School of Architecture, served as designer to the Superintendent of Buildings and Grounds at Columbia. She became quite well known in Chicago when she entered a contest to design a segment of a piece of land that would be most advantageous to the community. Mead was among the top 10 finishers – but gained distinction when her plan was used in promotional pamphlets.

This housing development in Bridgeport, CT was designed by Schenk and Mead – one of their projects that’s still around (above and below).
(Source: Alice Stone Blackwell, The Woman Citizen, Volume 3, Leslie Woman Suffrage Commission, 1918) 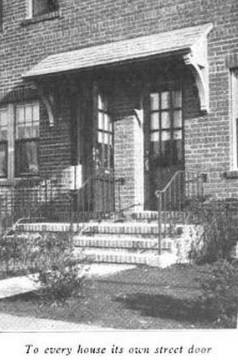 Schenk, who studied privately with Aubretin, joined Mead after working as a draftsman in several New York City architectural offices. While their first assignments were a summer home and a bungalow, both Schenk and Mead found the urban housing problem very fascinating. Their firm specialized in planning communities – residences that included parks, community houses, streets, stores. During World War I, Schenk and Mead designed a housing development in Bridgeport, CT that Mead saw to its completion.

Although Schenk and Mead only worked together for a brief time – Schenk passed away in 1915 – they went about their job in New York City - having “lots of fun” and liking it “tremendously.”

Go West, Young Woman - and South Too! Ryan and Roberts

Both Ida Annah Ryan and Isabel Roberts had impressive careers in architecture – Ryan in the Northeast and Roberts with Frank Lloyd Wright in Chicago – before they eventually teamed up in central Florida to create a women-led architectural firm of their own.

From an early age, Ida Annah Ryan had shown an interest in architecture. During her historic career, she recorded several firsts. The Waltham, MA native was the first woman to graduate with a Master of Science degree from MIT; and the first woman in the U.S. to earn a Master’s degree in architecture – also from MIT. After winning a traveling scholarship from MIT’s Architectural Department in 1907, she spent a year in Spain and Italy to further her studies.

On Ryan’s return, she opened her own architectural firm in Waltham. In 1909, she added Florence Luscomb, a fellow MIT graduate and women’s activist, to her practice.  They designed modest houses as well as a number of homes for the wealthy like industrialist B.C. Ames.

In addition to their architectural projects, Ryan and Luscomb were also involved in the women’s suffrage movement. When commissions dwindled during World War I, Luscomb eventually gave up architecture to devote her time to women’s rights and equality. Ryan worked for the War Department but held on to her private practice.

While still in Waltham, Ryan accepted projects from firms in the Central Florida area. She designed the Atlantic Coast Line train depot in St. Cloud and the Unity Chapel of Orlando. With no improvement in construction projects and the continued refusal of the state of Massachusetts chapter of the American Institute of Architects to grant her membership, she moved to Orlando and began a second career – where she would eventually meet Isabel Roberts. 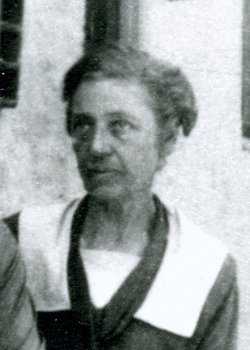 Isabel Roberts: One of the “Fellows” in Frank Lloyd Wright’s Studio

Isabel Roberts worked alongside Marion Mahony at Frank Lloyd Wright’s Oak Park Studio and was an integral part of the group that defined the Prairie Style design. Like Anna Pendleton Schenk, Roberts pursued her architecture training at a private studio in New York City established by Emmanuel Louis Masqueray and Walter Chambers.

When Roberts joined Frank Lloyd Wright’s Chicago Group, she was a draftsman, as were Mahony and five men – including Walter Burley Griffin and William Drummond – who would go on to build great careers.  However, Roberts also served as office manager, bookkeeper, and assistant to Wright – which, perhaps led to historians’ dismissal of her merits as an architect and building designer.

Not only did Roberts draft house plans at Oak Park – she also worked on designs for the glass windows in the Prairie style homes. When Wright left the country for Europe in 1909, Roberts, Mahony and other employees completed the unfinished assignments. It was Isabel Roberts who closed up the Oak Park Studio… and after working with other architects in Chicago, she moved with her family to Central Florida – thus paving the way for her eventual partnership with Ida Annah Ryan. 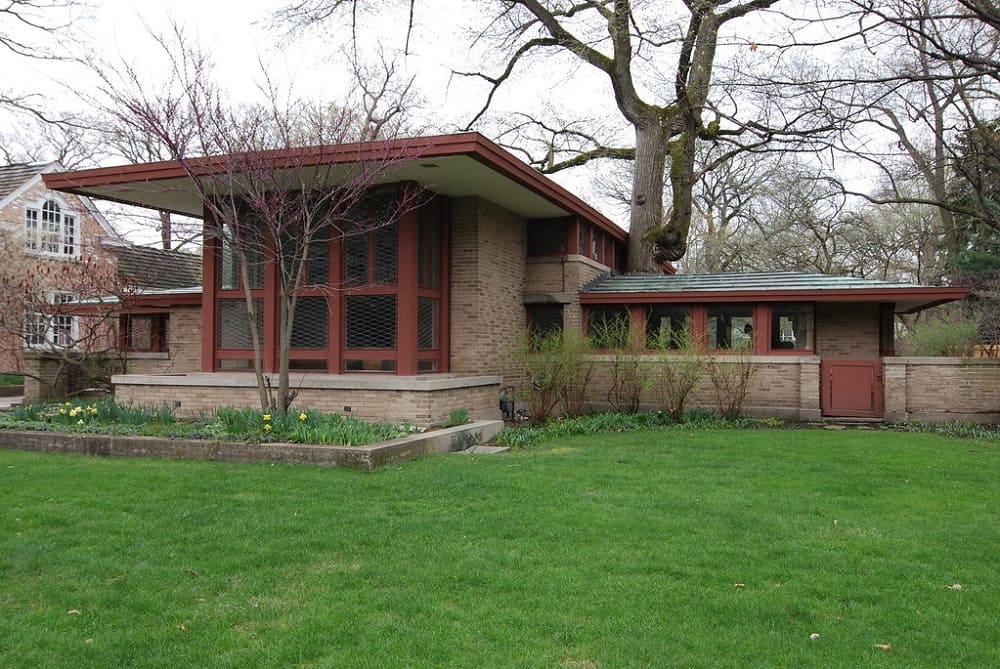 The Isabel Roberts House in River Forest (Illinois), the home shared by Roberts and her mother Mary, was commissioned out of the Oak Park Studio. It was believed to have been designed by Wright for another client. But, Roberts’ papers showed that she drafted the plans for the home in 1908.
(Photo credit: River Forest, IL, Frank Lloyd Wright, Gosia Malochleb under CC BY-NC 2.0)

In Florida, Ryan first became affiliated with Frederick Trimble and was joined later by Isabel Roberts. Within a few years though, Ryan and Roberts set out on their own – forming a women-led architectural firm and enjoying a long and successful partnership. 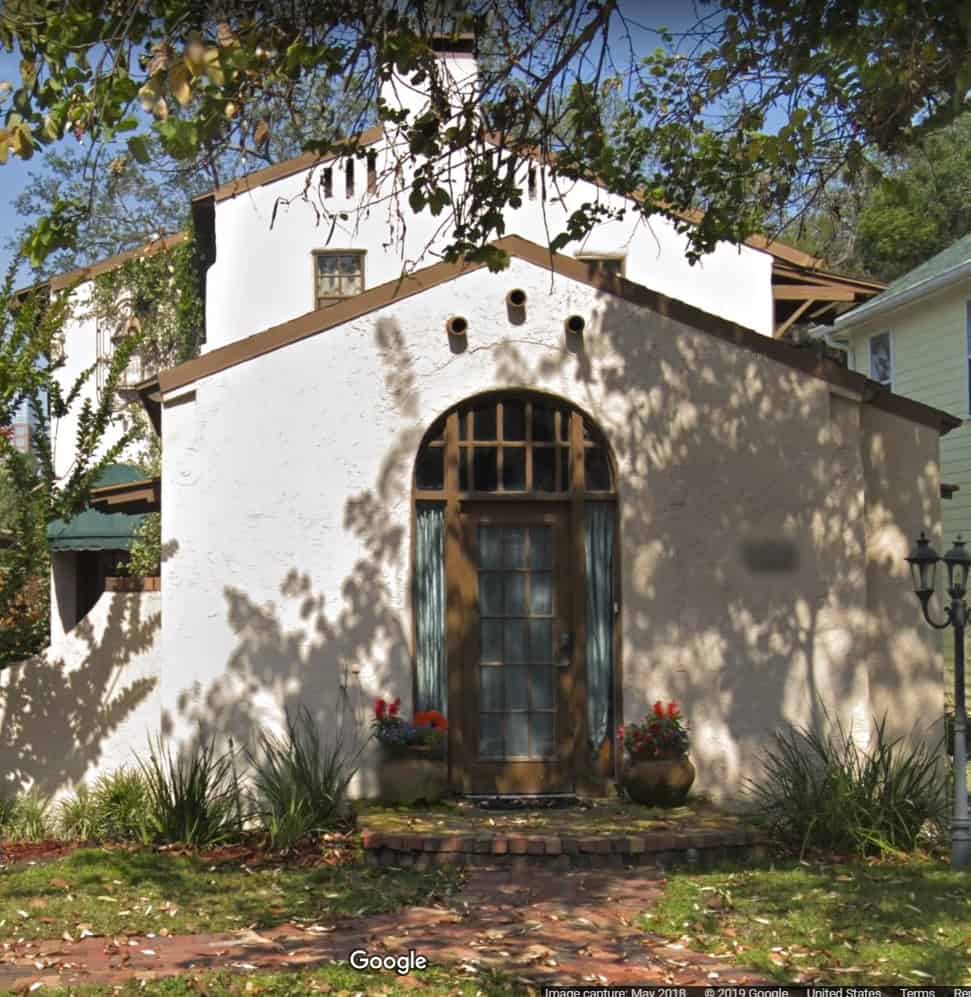 The Ryan & Roberts studio and home in Orlando was designed by Ryan in the Mediterranean-Revival style.
(Source: Google Maps)

Ryan and Roberts designed homes and landmark buildings in Orlando and other Florida cities, including the Amherst Apartments – which have since been demolished.  At one time, these apartments were one of the most prestigious residences in Orlando.  The partnership embraced architectural styles that they believed worked best in their new surroundings often defined as Mediterranean Revival style at the time and now often referred to as Florida style architecture. 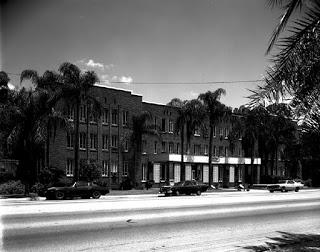 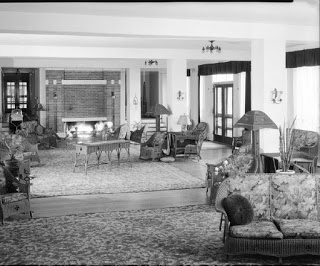 The exterior of the Amherst Apartments (left) and the spacious, airy lobby.
(Photo credit: Orange County Regional History Center via Architectural Past) 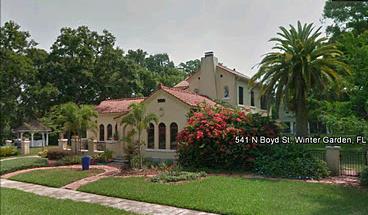 One of the homes - with a stucco façade – designed by Ryan and Roberts for a client in Winter Garden, FL.
(Photo credit: Architectural Past via Google Earth)

Just as the Howe-Manning-Almy partnership prospered, so did Ryan and Roberts. They continued to work together well into the late 1940s.

Yes, it was the 1900s – and even during those times, these amazing “lady architects” took control of their destinies. They were entrepreneurs – undaunted by challenges, willing to take risks and pursue their goals. And, as they made their mark in history, their lasting legacy remains with all the other women who followed in their footsteps and changed the face of architecture and the world forever. 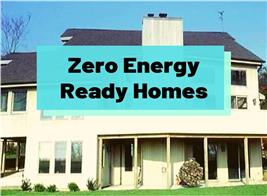 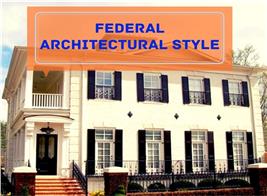 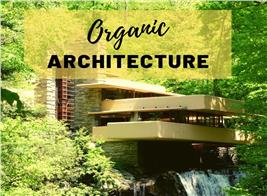