The Benefits of an Atrium in Your Home

How to Embrace Nature in Your New Dream Home

There’s nothing like a timeless classic design to spice up a modern space.

Perhaps inspired by the Prairie and Arts and Crafts house plans that emphasized harmony with nature, today’s architects and builders are incorporating the atrium in new house construction. This move is especially attractive to urban dwellers living in condominiums, townhouses, and penthouse apartments who are looking for plans that link the indoors to the outdoors. So for modern house plans and even traditional ones like the Ranch and Country styles, an atrium with shrubbery or flowers may now be part of the design package. 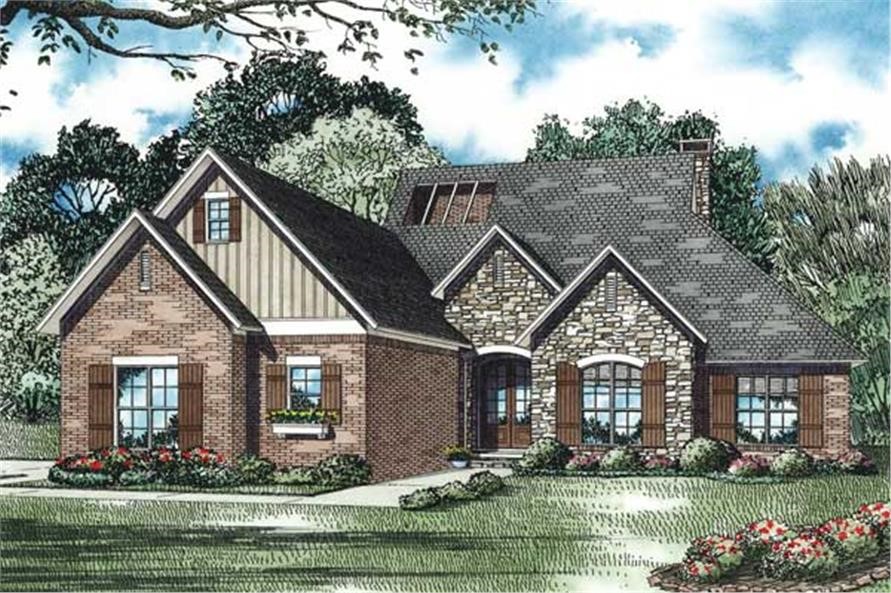 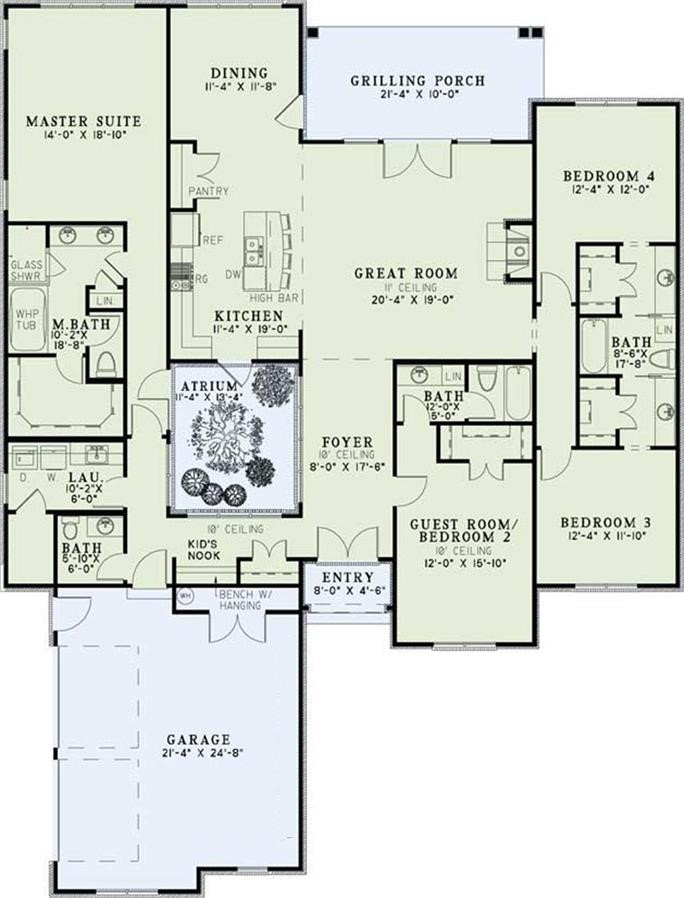 Top: This rendering of a 1-story, 4-bedroom, 3.5-bath Country style home features a beautifully landscaped front yard with flowers and plants. The skylights on the left of the main roof are for the interior atrium. Bottom: Inside the house is an atrium (shown in the floor plan) located just off the foyer, and accessible from the Great Room (Plan #153-1138).

The Atrium – and Nature - in the Modern Home

Described as the original “sunroom,” an atrium is an open-air part of a building that provides a lot of light and ventilation into the home and connects the indoors to the outdoors. In its earliest forms, the atrium’s open roof also facilitated the collection and storage of rainwater in a pool.

In both residential and commercial architecture, an atrium is surrounded by walls or columns with multiple entrances into the main building or home.

Open-air atriums are not covered and allow a view of the sky and plenty of natural light. The light that filters through the space provides an area to grow a garden or a variety of other full-sun plants. In addition, the modern atrium gives urban residents a peaceful and serene garden retreat. 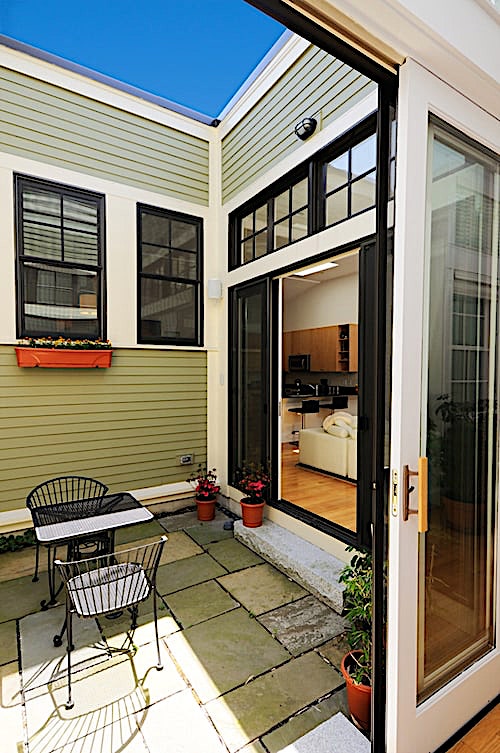 The secluded space situated at the center of a modest home provides light and air to the interior. This atrium can be reached from the kitchen or the living/family room (Photo © Jorge Salcedo | Dreamstime).

For potential homeowners who are designing a residence – whether a traditional suburban home or a condominium in the city – there is always the option of including an atrium in the floor plans. With the atrium comes the opportunity to create an attractive interior garden that opens up the home to nature.

As you plant your atrium garden, here are a few tips to consider.

1.  In decorating, “less is more.” The atrium is a  dramatic source of natural light and does not need too much in the way of accent touches.

2.  The home’s style should dictate the type of décor. Go minimalist with a Modern or Contemporary plan style and add a little more color for a Mediterranean, Spanish, or Southwestern home. 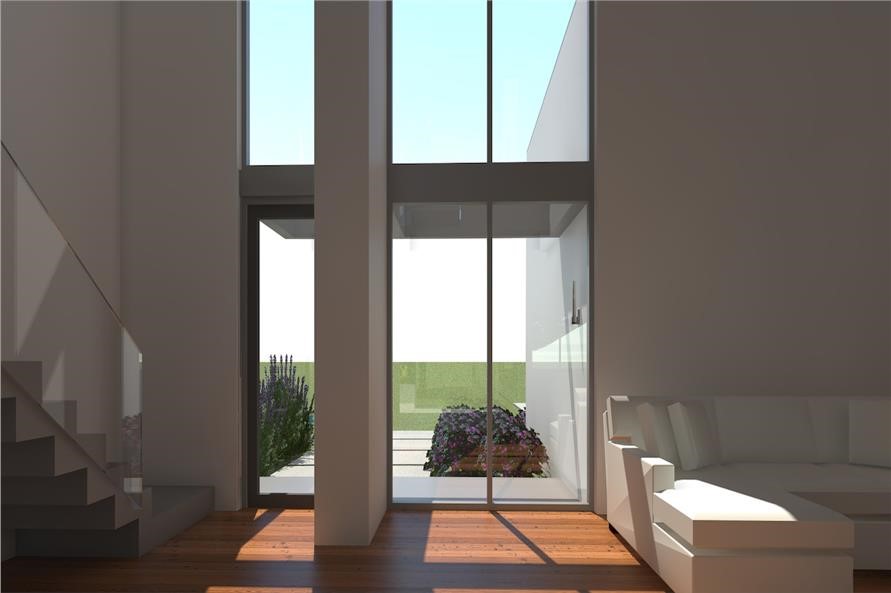 While not exactly an atrium, this dedicated area just off the foyer of a 2-story, 3-bedroom, 2.5-bath Modern style home plan manages to bring nature inside – with the help of the floor-to-ceiling glass wall. Note that the simple plants are in harmony with the home’s contemporary style (Plan #116-1015).

3.  Choose shrubs and greenery native to the area and adaptable to the conditions and lighting in the atrium. Norfolk pine, bamboo, and small palm trees, as well as Japanese maple, with its red leaves, and angel’s trumpet, with its large white, yellow, or pink blooms, can easily thrive in an indoor atrium.

4.  If your space is large enough, you may want to consider a water feature to maintain the atmosphere of calm and serenity in the space.

Don’t Limit Yourself to an Atrium

Not all is lost if you can’t have an atrium in your new home. There are a few other choices for you to link the indoors to the outdoors. Consider conservatories, skylights, clerestory windows, and glass doors – some of the features available for new homes.

• A conservatory is a glassed-in room, often with a glass roof as well. Think of it as an atrium at the back of the house. Some homeowners use them as a kind of greenhouse in which to grown plants year round. In colder climates, they are often used as three-season rooms, though they can be used in winter if heated – often with a wood stove. 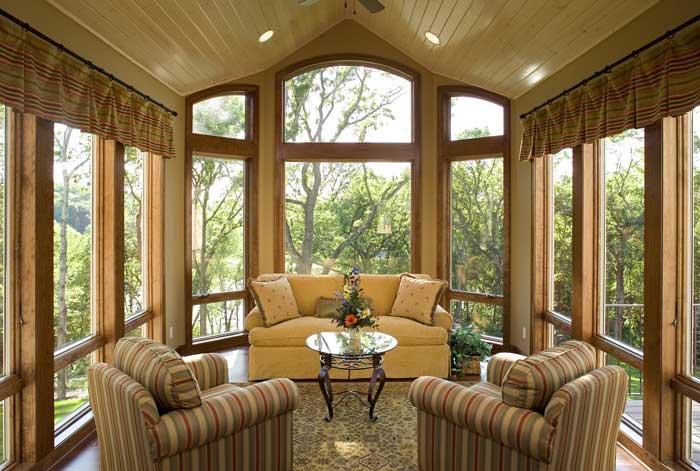 A sunroom or conservatory is a light-filled, restful space in the home where one can grow plants, enjoy nature, entertain, or just relax. Sometimes, conservatories have glass roofs in addition to glass walls (Plan #165-1077).

• A skylight is basically a window that is placed on the roof of a building or house. A very effective way of promoting natural light, especially in spaces that don’t have traditional windows, a skylight creates a visual feature and increases views of the external environment. In some homes, skylights are installed in the kitchen, living room, or even in some bedrooms that don’t get a lot of sunlight. 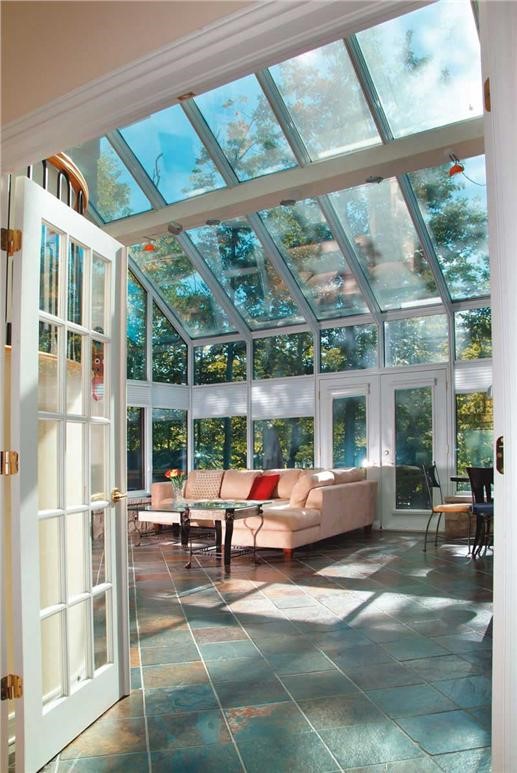 With its skylights, clerestory windows, and glass windows and doors, the 2-story sunroom in this 2-story, 3-bedroom, 2.5-bath Contemporary style home gets abundant natural light and clear views to enjoy the surrounding natural landscape  (Plan #126-1190).

• In modern plans, the clerestory window is a popular and practical choice. The word clerestorie (“clear story”) refers to the upper level of a Gothic cathedral and describes how an entire story of height was “cleared” to bring natural light into the huge interior. In today’s design, the clerestory window is a large window or a series of small ones built along the very top of a wall to bring in light and breezes into a space – without compromising the privacy of the residents.

• The adaptation of the clerestory window in residential architecture is credited to Frank Lloyd Wright who designed and built homes that were in harmony with the environment and provided abundant daylight to the interiors. So from one of architecture’s masters to student designs of the Solar Decathlon competition, the clerestory window is both a stylish and efficient element in home plans. 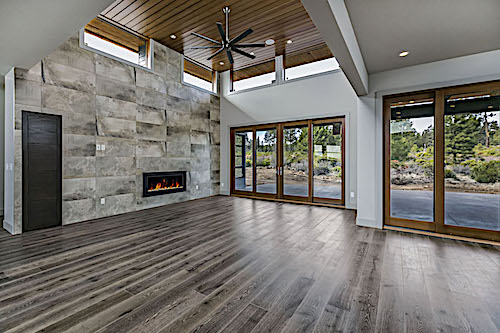 Clerestory windows fill this living area with plenty of sunlight, give it a breezy, airy atmosphere, and allow residents a beautiful view of the outside environment (Plan #202-1015).

With an atrium, conservatory, skylight, clerestory windows, glass doors, and other design features you can have all the daylight you’ll want – and more – in your new home.

In ancient Rome, the atrium was both a decorative and functional feature of the home. It was the focal point – the main entertaining space as well as a way to allow light and air into the other rooms. In a time without electricity, the atrium provided much-needed light and ventilation to the area. 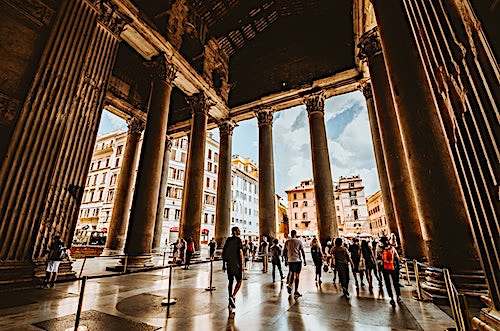 This spectacular atrium inside the Pantheon is a show-stopping artifact of ancient Rome (Photo by Christopher Czermak on Unsplash).

During Medieval times, the atrium was an open courtyard at the entrance of basilicas and palaces. That atrium version usually had covered aisles on the sides. In today’s modern commercial buildings, the atrium is an entry hall with a translucent roof or a skylight that connects the outdoors with the indoor space. 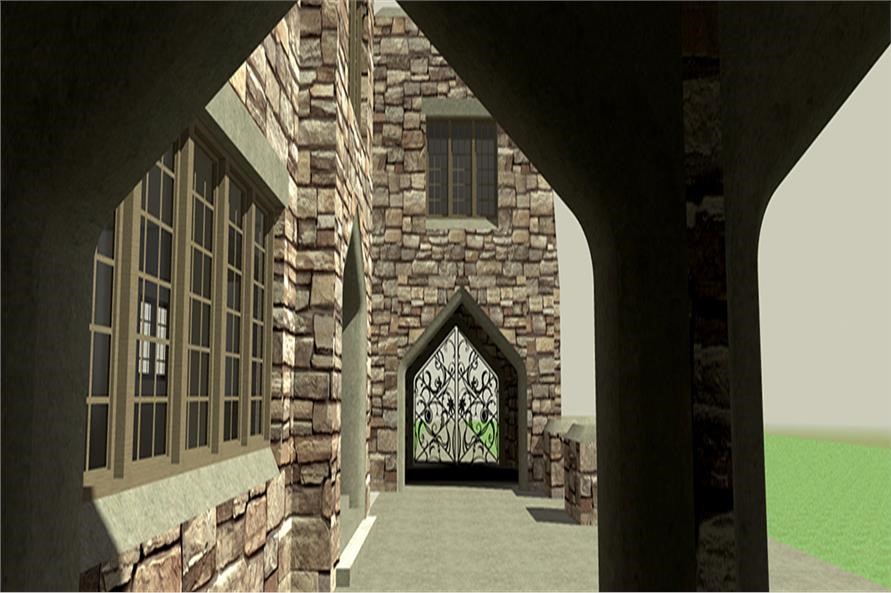 Beginnings of the Atrium in the U.S.

Fast forward to modern times and the atrium in the U.S.

If Frank Lloyd Wright is credited with adapting clerestory windows into American architecture, another big name in the field – Joseph Eicher, a developer, not an architect – takes the honors for introducing the atrium to Midcentury Modern home designs and a wider segment of the residential market.

In the early 1940s when Eichler moved his family to California, they lived in a house designed by Wright. Already intrigued by the modernist principles and stylistic elements, Eichler hired distinguished architects and firms to design homes that were different from the traditional architecture found throughout most of suburbia.

Between 1940 and 1974, Eichler built more than 11,000 modernist homes in Northern and Southern California and New York State. An Eichler home had light-filled interiors with skylights, floor-to-ceiling windows, private outdoor rooms, and gardens – inviting living spaces that linked the indoors with the outdoors – and open-air entry and central atriums. 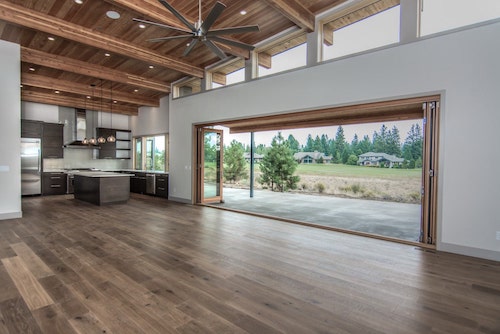 In a new Eichler-like home, the indoor-outdoor connection is in full display with the sliding glass doors and an open-air central atrium (Plan #202-1022).

Although it is centuries-old, the atrium’s concept and design remain basically the same today. Starting with its resurgence in United States in the 1900s, the atrium is now frequently found in modern style homes as well as contemporary Ranch and Country style home plans – and of course, commercial spaces.

The old is “new” again with the atrium style. After all, who can argue about this design, which is in harmony with nature and brings light and airiness to a home. 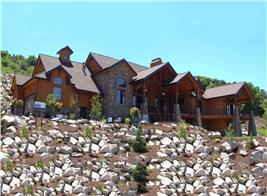 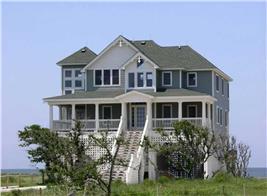 A House Built for the View 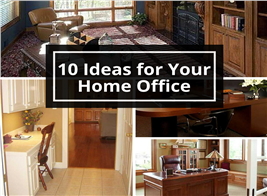 10 Design Ideas for Your Next Home Office 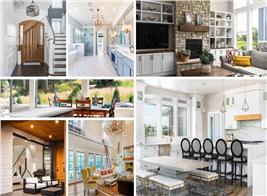 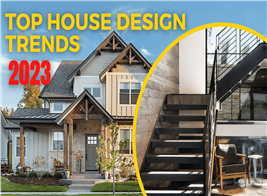 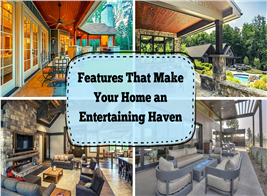