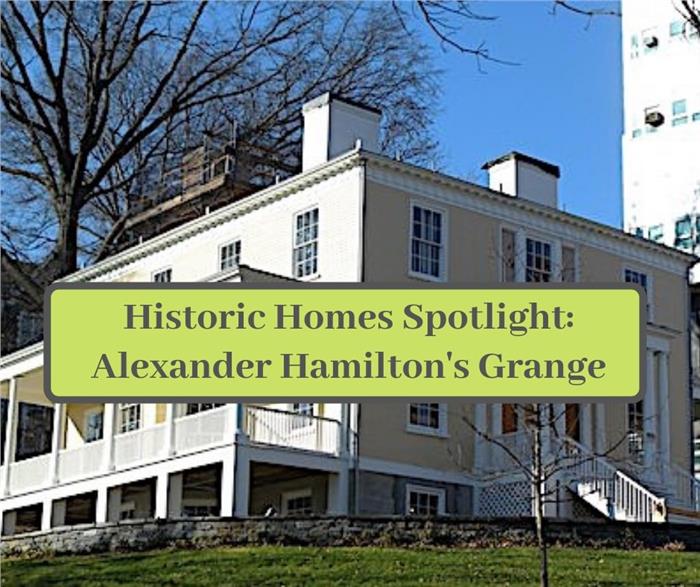 If you are to believe the many “man on the street” interviews you see these days on late-night-talk and political commentary TV shows, asking “Who is Alexander Hamilton?” a couple of years ago would have drawn a blank stare or an absurd answer. We are led to believe that much of modern American culture is not up on history.

But thanks to Hamilton, the break-out Broadway show by Lin Manuel Miranda that everyone on the planet seems to be aware of, that probably wouldn’t be the case today. Because of the immense popularity of the show, which is also now in Chicago, in London, and on tour, we thought it would be fun to look back at some of Hamilton’s history, particularly his New York home! 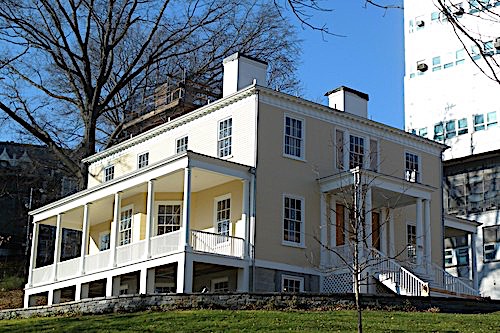 Hamilton’s Federal style four-square estate home as it appears in its latest location in upper Manhattan. This photo was taken in 2010 (photo credit: Hamilton Grange by Jim.henderon Public Domain).

Like many houses of America’s other Founding Fathers, the former home of war hero and political trailblazer Alexander Hamilton is open to the public as a national monument. However, unlike those other Revolutionary figures, Hamilton’s home, known as the Grange, has undergone a great deal of change since the man lived within its walls over 200 years ago.

Just like the man, the Grange – a Federal-style four-square mansion which Hamilton named after his grandfather’s estate in Scotland – was neglected and nearly forgotten for decades. Now, the historic home has experienced a tremendous rebirth that serves as a testament to one of the nation’s most pivotal figures. In order to understand how this home plays into the history of the nation, as well as the history of New York City, it’s important to first look back on the challenges Hamilton faced early on in life and how they motivated his accomplishments in this historical homes spotlight. 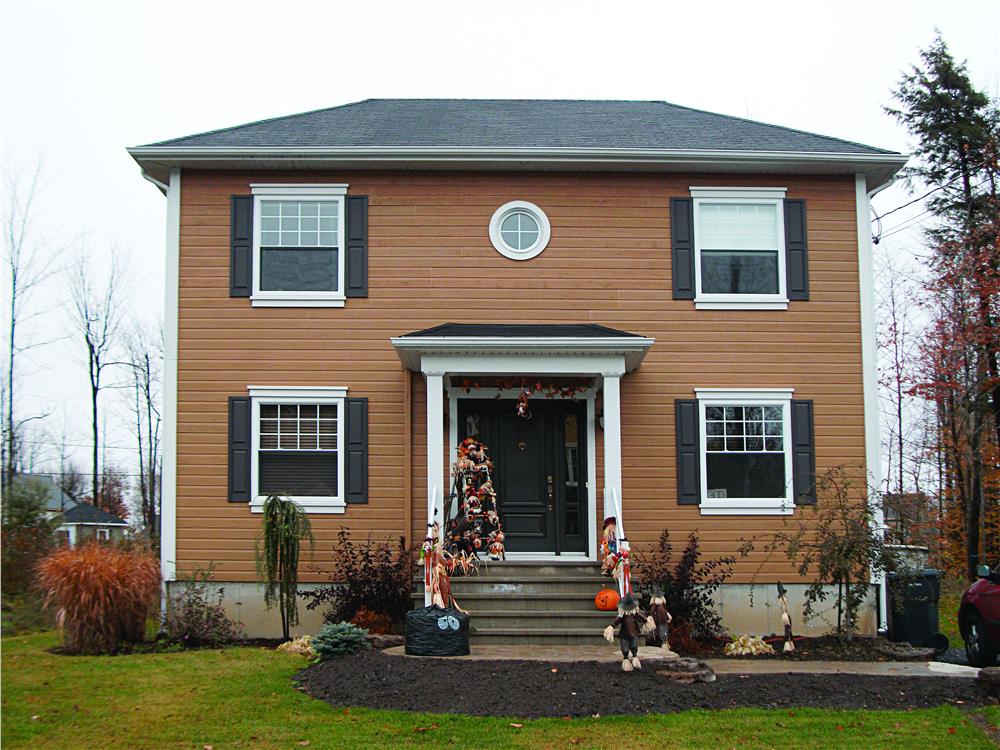 Building a Grand Estate after the War

Hamilton played an integral role in the American Revolution, fighting in numerous battles along with serving as the personal aid to General George Washington. After the war’s end, Hamilton continued to play a pivotal role in the development of the infant nation, holding positions as a delegate in the first Congress and practicing law in New York. In 1789, he earned a seat in President Washington’s cabinet as the first United States Secretary of the Treasury, where he developed much of the country’s current financial structure, including the founding of the first national bank.

But Alexander Hamilton led a very different early life than many of his peers, which contributed a great deal to the vision and scope he brought to the construction of his grand home. Born in 1757 (though some evidence suggests he was actually born in 1755) on the island of Nevis in the Caribbean to parents that were never married, he did not have the wealth or status that many other leaders of the American Revolution had. Before the age of 13, Hamilton would be abandoned by his father, suffer the death of his mother, and become separated from his younger brother.

Despite all of this loss, Hamilton worked as a clerk for a local importing business and earned enough money to pay for a relocation to New York City, where he attended King’s College (present day Columbia University) in 1773. During the following years, Hamilton joined a New York volunteer militia and form friendships with other key revolutionary figures such as John Jay and Alexander McDougall, always pushing to prove himself in a world where privilege and status often stood in the way of liberty and individual determination.

During his time in post-war government, Hamilton slowly began to create plans for his own personal estate that he would share with his wife, Elizabeth Schuyler, and their children. Some believe that Hamilton sought to build his home as a response to rival Thomas Jefferson’s estate Monticello, seeking to strike a balance between the grand elegance that would signify his success and accomplishments with a modern pragmatism that would still honor his humble origins. 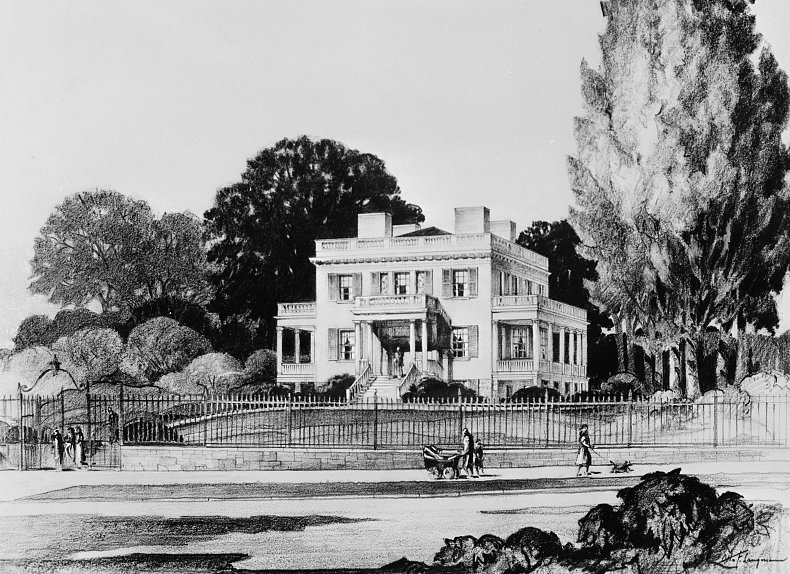 This illustration shows Hamilton’s home, as it was pre-1889, before it was moved from from 237 West 141 Street to 287 Convent Avenue, New York, New York County, NY (image credit: Public Domain).

To accomplish this goal, he hired architect John McComb Jr., who is also known for designing other New York landmarks such as Gracie Mansion and New York City Hall, to spearhead the project, which Hamilton described to his wife as a secret “sweet project.” Though Hamilton did not design the structure himself, as Jefferson did with his home, he was deeply involved in the design and construction, ensuring that every detail was completed to his specifications.

The Grange was finally completed in 1802 on 32 acres of land Hamilton owned in Harlem neighborhood of Manhattan, featuring a combination of Federalist and country home styles that was common during the time. As such, Hamilton Grange features an informal yet elegant facade that includes windows adorned with shutters and a proud covered porch at the entryway. A modest two story building that reflected the changing temperament of the young nation he helped build, The Grange was a way for Hamilton to create the type of family home which he did not have growing up.

Upon entering the home, visitors were greeted by an open foyer that housed a bust of Hamilton created during his time as Secretary, further highlighting Hamilton’s desire to establish the home as a marker of his achievements in life. Today, a recreation of that bust continues to sit in the foyer to greet the guests that visit Hamilton Grange National Memorial.

Other areas of the home included a private study for Hamilton, a personal library, a parlor for entertaining and a proud dining room. While the home may seem sparse or simple by compared to other so-called mansion estates and luxury homes, the overall theme of Federal style homes draws inspiration from the Georgian style that was popular in England at the time. Hamilton Grange exemplifies many of the hallmarks of the Federal four-square style – a square shape, an understated exterior, and geometric flourishes worked into the interior layout – while still bringing in the cozy, inviting landscaping of the country style homes.

The Grange after Hamilton

Sadly, Alexander Hamilton was only able to live in his home for two years, as he was killed in a duel with then-Vice President and lifelong rival Aaron Burr in 1804. The Grange remained in the Hamilton family for approximately 30 years after his death, eventually falling into decay before it was condemned and slated for demolition in 1889. That was when the congregation of St. Luke’s Episcopal Church, who were looking for a new place of worship, purchased the property and relocated in a few blocks away so that it could comply with new street greed development in the area.

The church would build some additions to the property over the years, though it never regained it’s former glory under their care. In 1960, the Grange was finally declared a National Historic Landmark, but once again languished in decay for nearly another five decades. 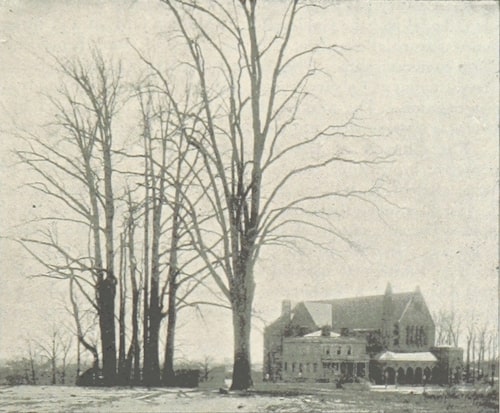 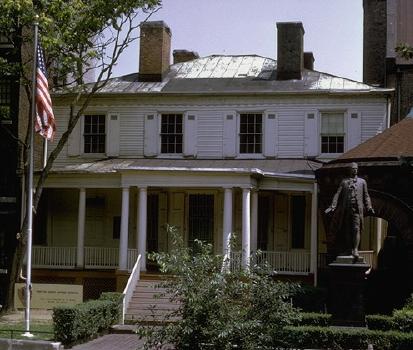 Finally, in 2006, the memorial was closed and plans were drawn to relocate the home a second time so that it could be properly restored and reopened. After much public outcry from the community, the home was moved to St. Nicholas Park, which was still in Hamilton’s home neighborhood of Harlem, and even on the original tract of land he once owned. 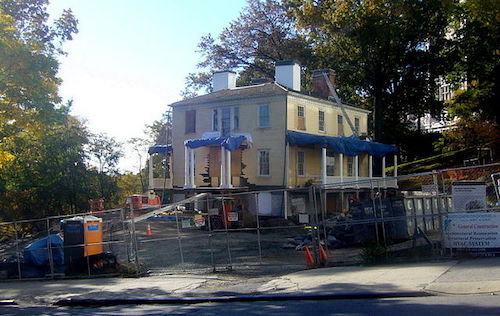 Hamilton’s Grange was moved to its third – and final – location in upper Manhattan. The porches had been removed for transport of the home and are in the process of being restored here in 2009 (photo credit: Hamilton Grange at St Nicholas Park by Abrahami under license CC BY-SA 3.0).

Today, the Hamilton Grange National Memorial stands as a meticulous recreation of the home as it was in 1802, including many artifacts from the Hamilton family as well as recreations and actual furniture from the period.