Home > Blog > Home Building > Stick-Built vs. Truss-Built Roof: The Pros and Cons of Each 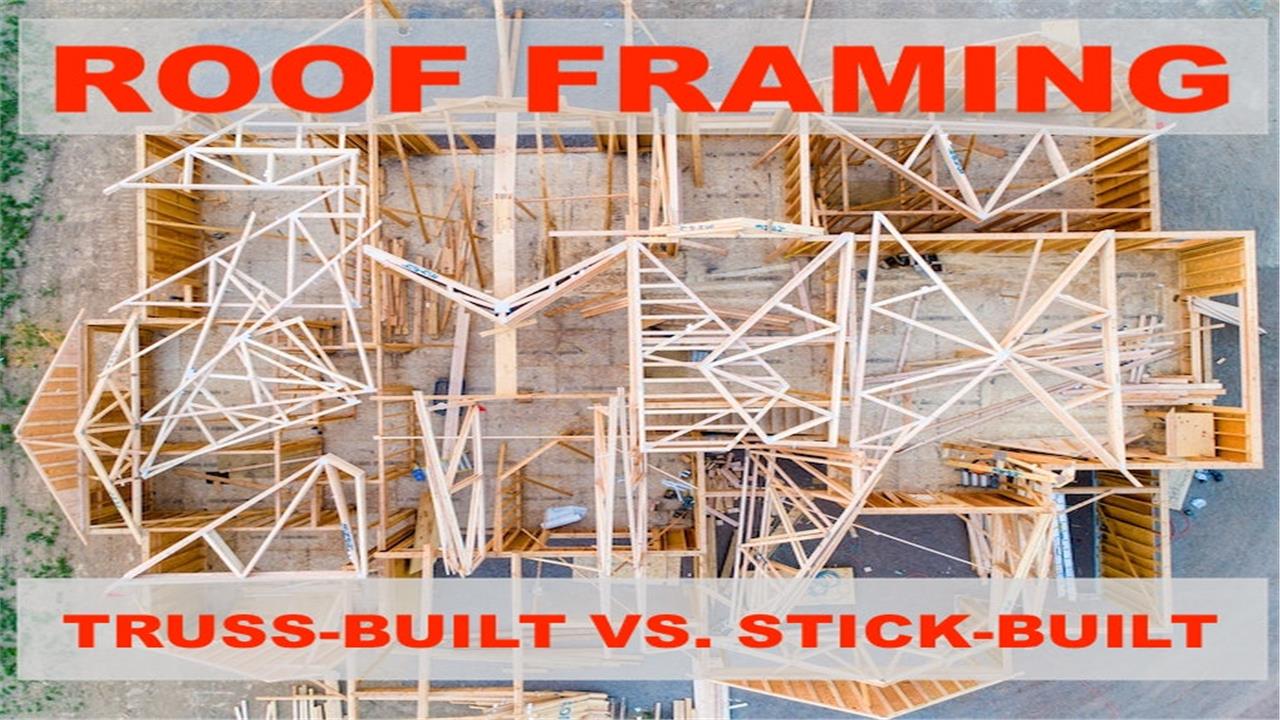 Which Roof Should I Choose for My Home Build?

It turns out that both gable and hip roofs can be built on-site, also called stick-built, using ridge boards, rafters, collar ties, and chords. Both kinds of roof can also be built using prefabricated trusses, which are basically lined up, fastened in place, and connected with roof sheathing.

We are going to explain both types of roof construction, the differences between the two roofing systems, and whether one is better than the other. A hint: as with so many things, it depends – on a lot. 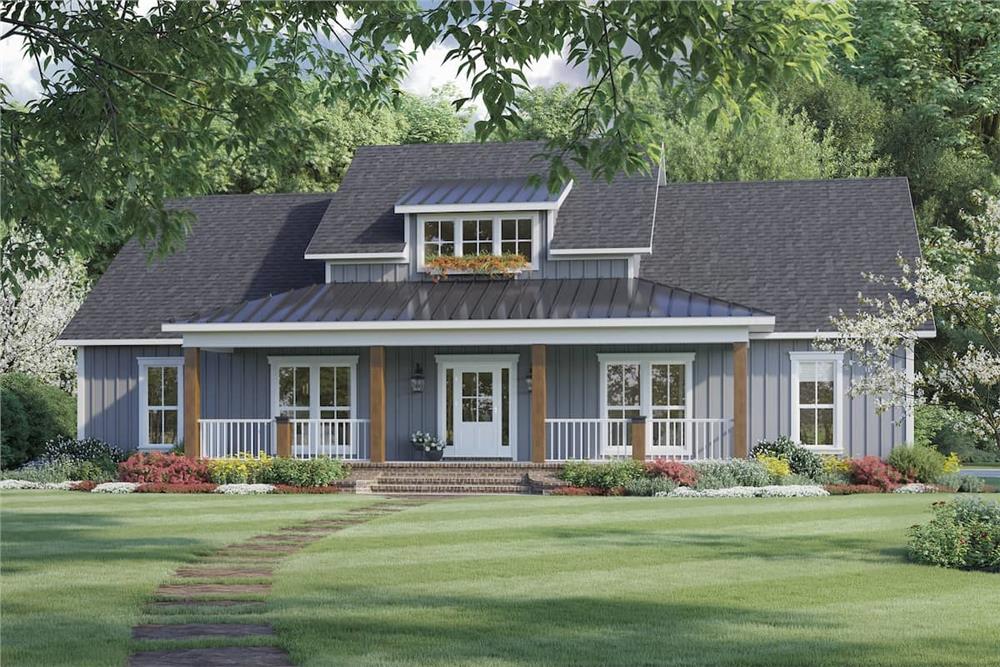 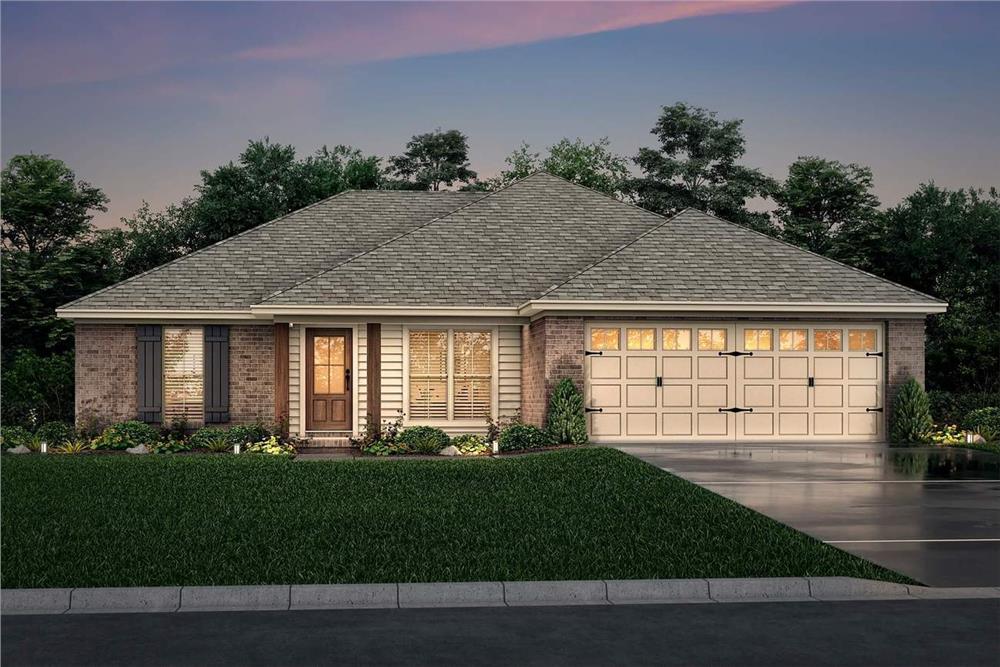 Whether a house has a gable style roof (top) or a hip style roof (bottom) the roof structure can be built on-site from dimensional lumber (stick-built) or assembled from prefabricated trusses trucked to the work site (truss-built). The choice is yours.

When you envision the common roof of a house being built, whether gable, hip, shed, or gambrel (the four most common, in addition to flat), you probably think of rafters, bottom chords, and perhaps collar ties that span the the middle or top third of the rafter span on a gable roof. Here are the basic definitions, considerations, and pros and cons of this type of roofing.

What Is a Roof Rafter?

Rafters are typically lengths of dimensional lumber in 2x6, 2x8, 2x10, or 2x12 sizes and are a traditional means of framing a roof. The process of building with them is called “stick framing.” Homes built with rafters are often described as “stick-built” houses. 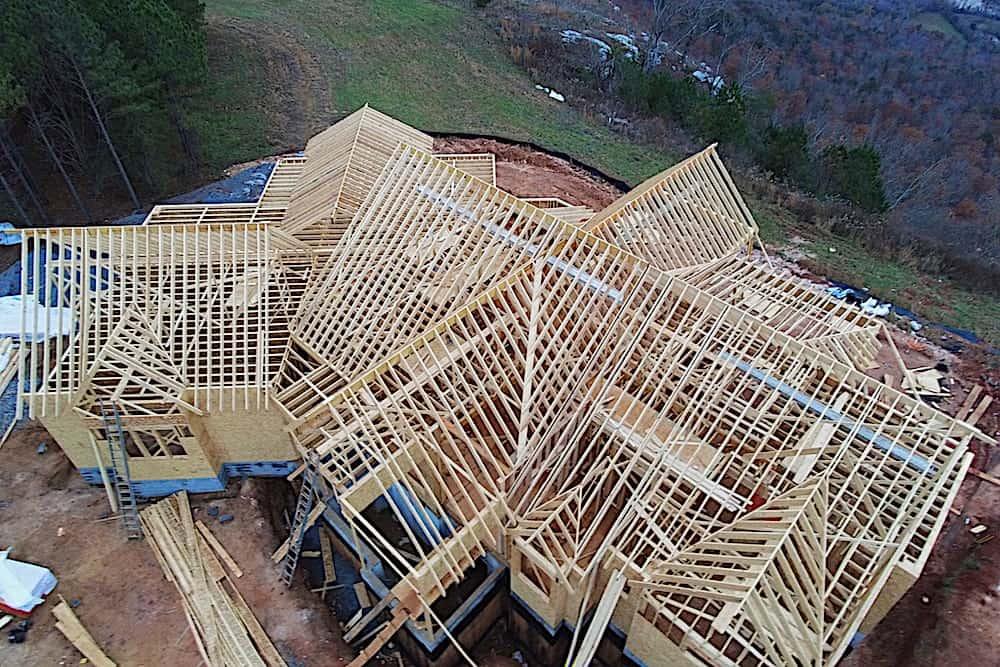 This gable style roof is a good example of a stick-built roof structure. The overhead view clearly shows the rafters and the relative simplicity of the construction. The main complication comes with the intersecting gables of the intricate roof design (Plan #198-1095).

How Do You Build with Rafters?

Carpenters cut each rafter from dimensional lumber on the job site. Each piece of wood has to be cut to size and fastened together manually, along with a ridgeboard, to form a roof. It is a very hands-on process.

Parts of a Site-Built Roof 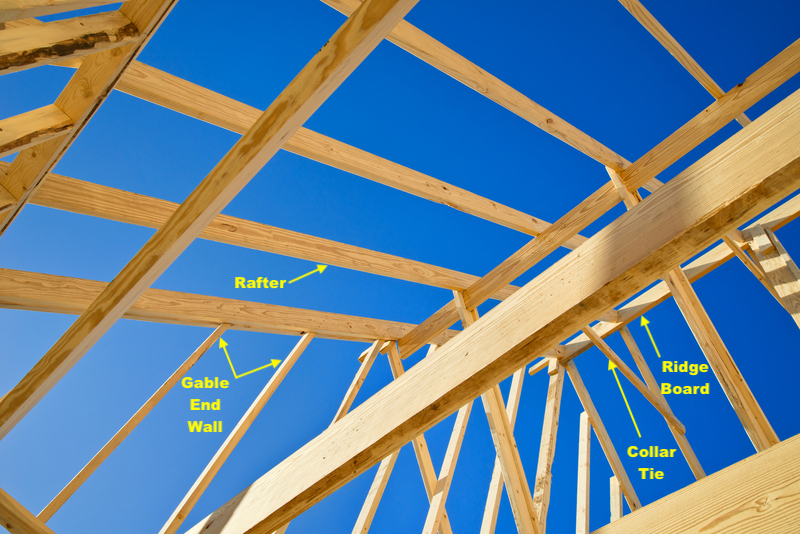 This view of a roof under construction shows some of the main elements of a stick-built gable roof: rafters, ridge board, collar tie. Not shown is the bottom chord or ceiling joist (photo credit: © Leerobin | Dreamstime).

There are many reasons why designers, home-building contractors, and actual framers themselves find using stick-built roofs to be an attractive option.

You have to create each rafter on the job site. Because of this, if you are building in a more remote location, it’s significantly easier to transport the raw materials to the job site, rather than trying to move something that’s already constructed and quite bulky.

You can bring in the materials via truck, boat, or even helicopter, if need be.

Because of the unique nature of building rafters, you can ensure that last-minute changes to the building plan can be accommodated. There will never be a “stop the presses!” moment when constructing a stick-built roof.

Additionally, there isn’t any lead time on a project like this because rafters don’t need to be ordered or built ahead of time. And if last-minute changes are made on-site – as often happens during a build – construction can begin the same day details are worked out as long as you have access to a lumberyard. 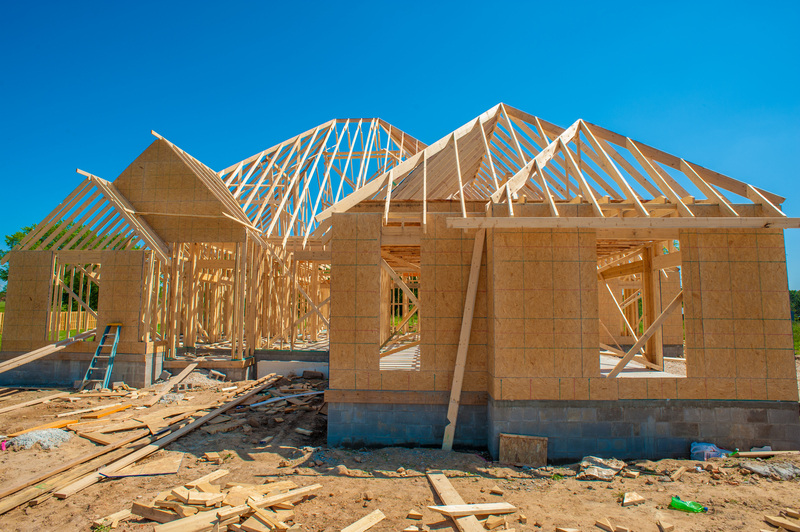 This home thats under construction has a combination hip and gable roof that is in the process of being site-built using conventional faming methods. The custom cutting and framing thats necessary makes it easier to build than by using pre-built trusses (photo credit: Janece Flippo | Dreamstime).

Steep pitched roofs are a very desirable style to many, and rafters can easily support this look and create wide-open space beneath the roof. Because of this open space, rafters can provide 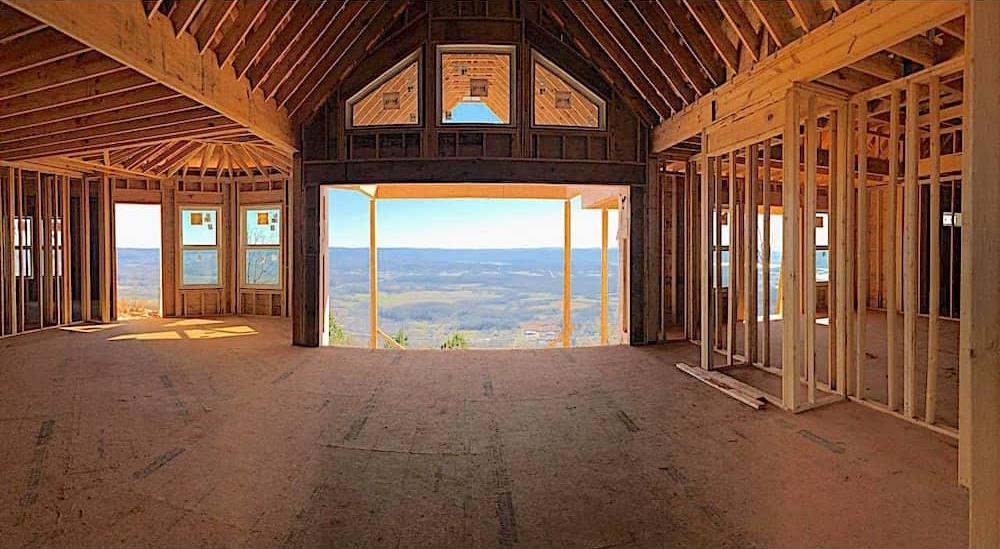 This view of the Great Room in a single-story home under construction shows the steeply sloped roof in the middle section that allows a dramatic vaulted ceiling (Plan #198-1095).

You’ll find that each disadvantage of site building is actually a flipside to each of the advantages to consider when building a stick-built roof.

All Work MUST Be On-Site

Because all of the work must be completed on site, it means that the weather is in complete control of the pace of construction.

It’s not good for lumber to get wet (or you might be looking at insurance claims down the line), so it’s not a great idea to work in the rain – or store materals on site for too long. You also must consider the impacts of windy days and extreme temperatures, both cold and hot.

This advantage is particularly double-sided, for the reasons below:

Steep Roofs –To the Extreme

Roofs with a very steep pitch can often create lots of unused – wasted – space within the interior of a home if not converted into living spaces or vaulted interior ceilings.

Economical and time-saving in most cases, trusses have been welcome on the job site, especially in the past 50 years or so. Here are the basic definitions, considerations, and pros and cons of roofing built with prefabricated trusses that are trucked to a site and lifted into place by a crane.

What Is a Roof Truss?

A residential roof truss is a premade wooden structure, typically triangular in shape, that is fastened to and connects the outside walls of a house; it provides structural support for the roof sheathing, underlayment, and shingles. 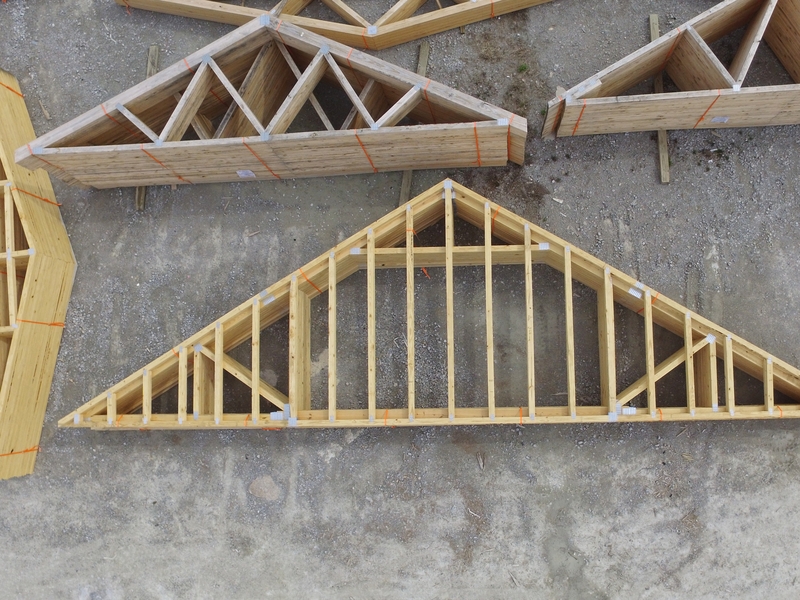 How Do You Build a House with Trusses?

Trusses are most commonly built with 2x4s or 2x6s and are fabricated in a factory off-site before construction on the home begins (known as pre-fabrication or “pre-fab”). The trusses are then delivered, fully intact, to the construction site. Because a machine cuts each board, it is an extremely precise process.

Parts of a Truss-Built Roof 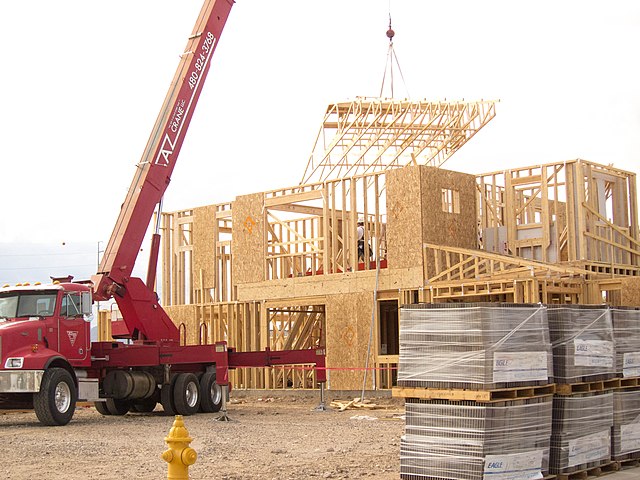 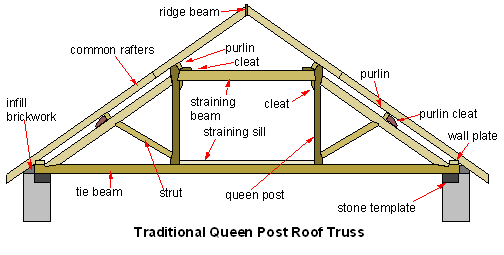 Top: This set of eight queen-post trusses is being lowered into place on a home thats in the process of being built. Note that the process requires suvvicient accessablity for the use of a large truck-mounted crane (photo credit: Public Domain). Bottom: This diagram shows the parts of a queen-post truss, a style of truss allows for a clear area in the center that can be used for limited storage space in an attic (Illustration credit: Queen-post-truss by Bill Bradley under license CC BY-SA 3.0)

Here are the reasons using trusses is an attractive option for many builders:

Trusses are created to exactly match the needs of your home build. They can be modified to weather earthquakes (if you’re building in California, for example) and other special events. No matter the requirements, they satisfy universal design standards and come with the seal of approval from a structural engineer.

Additionally, the precision of using machine-cut lumber means there is less room for mistakes.

Because the trusses arrive at the building site ready to go, you aren’t at the mercy of the weather as you might be with rafters. It’s also more difficult for trusses to go home with workers, as spare lumber from rafters might.

Additionally, because trusses are created on the ground and then placed onto the walls, workers spend less time on scaffolding and ladders (and less time on site in general), so there are fewer chances for a fall to occur and fewer labor costs.

It only takes a day’s work to install the trusses on an average size American home. From there, things speed along quite nicely in that the roof sheathing can go on next and then the shingles, in rather quick succession.

If you are a homeowner who wants the project to be finished quickly – or a contractor interested in maximizing your building schedule – then this is a major consideration.

Building with prefabricated roof trusses isnt all upside; there are still a few cons to using them for your roof.

When fully assembled, trusses are bulky and weigh a lot. Because of this, it cuts down on the ways you can deliver trusses to a construction site. You can’t bring them in via pickup truck, boat, or helicopter. They need to come in via a freight truck; and they need to be put in place with a crane.

It would also be difficult to transport trusses to a more remote construction site.

Trusses must be pre-ordered and arrive mostly put together. Because of this, you don’t have the creative freedom of design that a rafter-built roof might offer – simply because you can’t make any last minute changes or adjustments as you go.

Typically, the attic space is constricted unless a special truss design (such as queen oost) is specified before fabrication.

These hip style roof trusses in a house under construction demonstrate the lack of open, free, available space thats available in the attic because of the intricate structural lumber webbing (photo credit: © Oleksandr Rado | Dreamstime).

Trusses vs. Rafters: Which One When?

When considering the advantages and disadvantages of stick and truss roofs, there are certain situations in which one clearly outdoes the other.

You should use trusses when

You should use rafters when

If either stick-built or truss-built roofing was perfect, then we wouldn’t need to discuss which one was best. It’s important to consider your build’s budget, timeline, and location when choosing  which type of roof is best for you.

Footnote: the lead photo of this article is by Avel Chuklanov on Unsplash 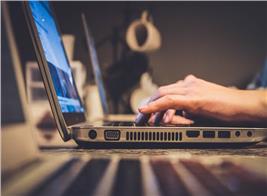 Do my house plans need to be engineered? 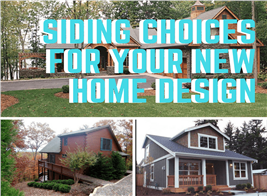 Tips for Choosing the Best Siding for Your New House 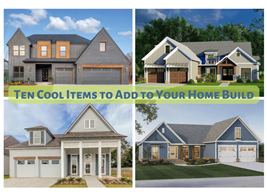