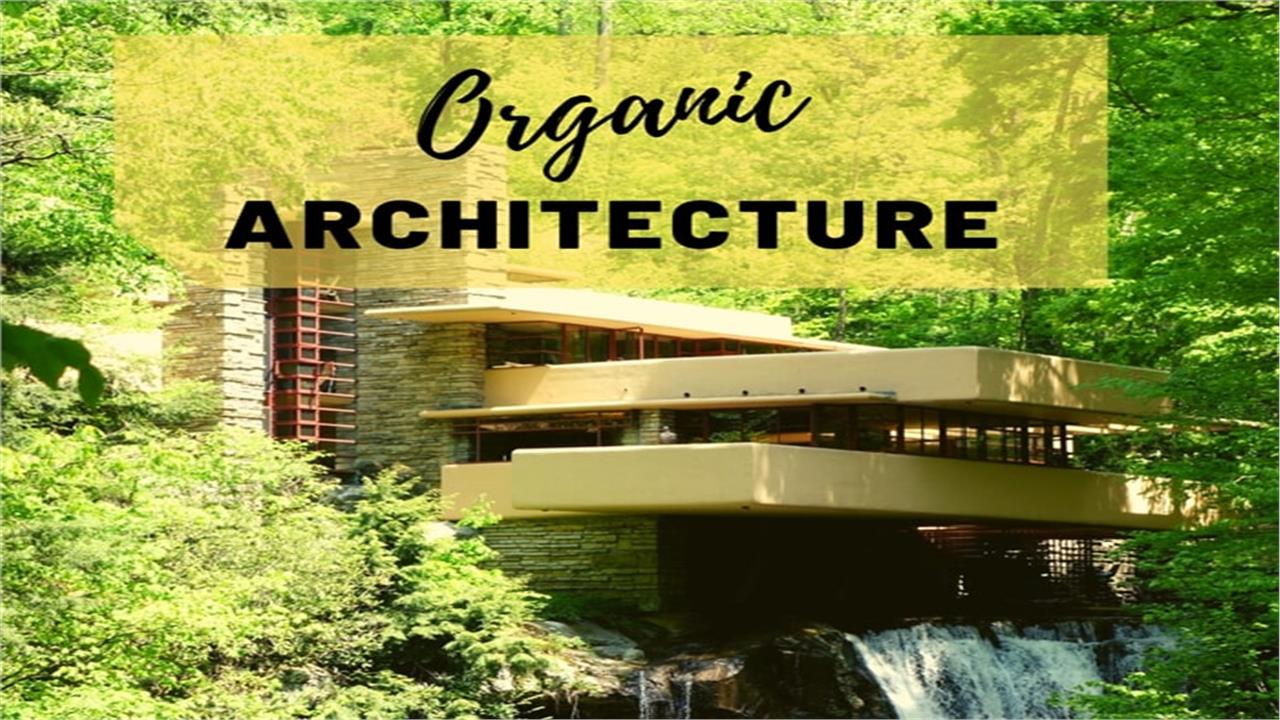 Organic Architecture is a special type of design and construction. It’s the only type of building design that has as its main purpose seeking harmony between human habitation and the natural world.

This harmony is achieved through design elements that aim to be sympathetic and well-integrated with a site. With this in mind, the resulting buildings, furnishings, and surroundings all become part of a unified, interrelated composition.

What is Organic Architecture?

Organic Architecture is, in essence, the pursuit of effortlessly combining a structure, its surroundings, and the site on which it sits.

Home and other buildings in this style should not only complement their surroundings but also seem to blend perfectly with them as if growing out of them as a natural element.

This particular style of design and construction philosophy is the brainchild of famed American architect Frank Lloyd Wright. Considered the "Father of Organic Architecture," as he was the first to coin the term, Wright made the style popular through his portfolio of work spanning a successful 70-year career. The style has since grown much larger in scope and expanded internationally to include many nonresidential buildings as well. 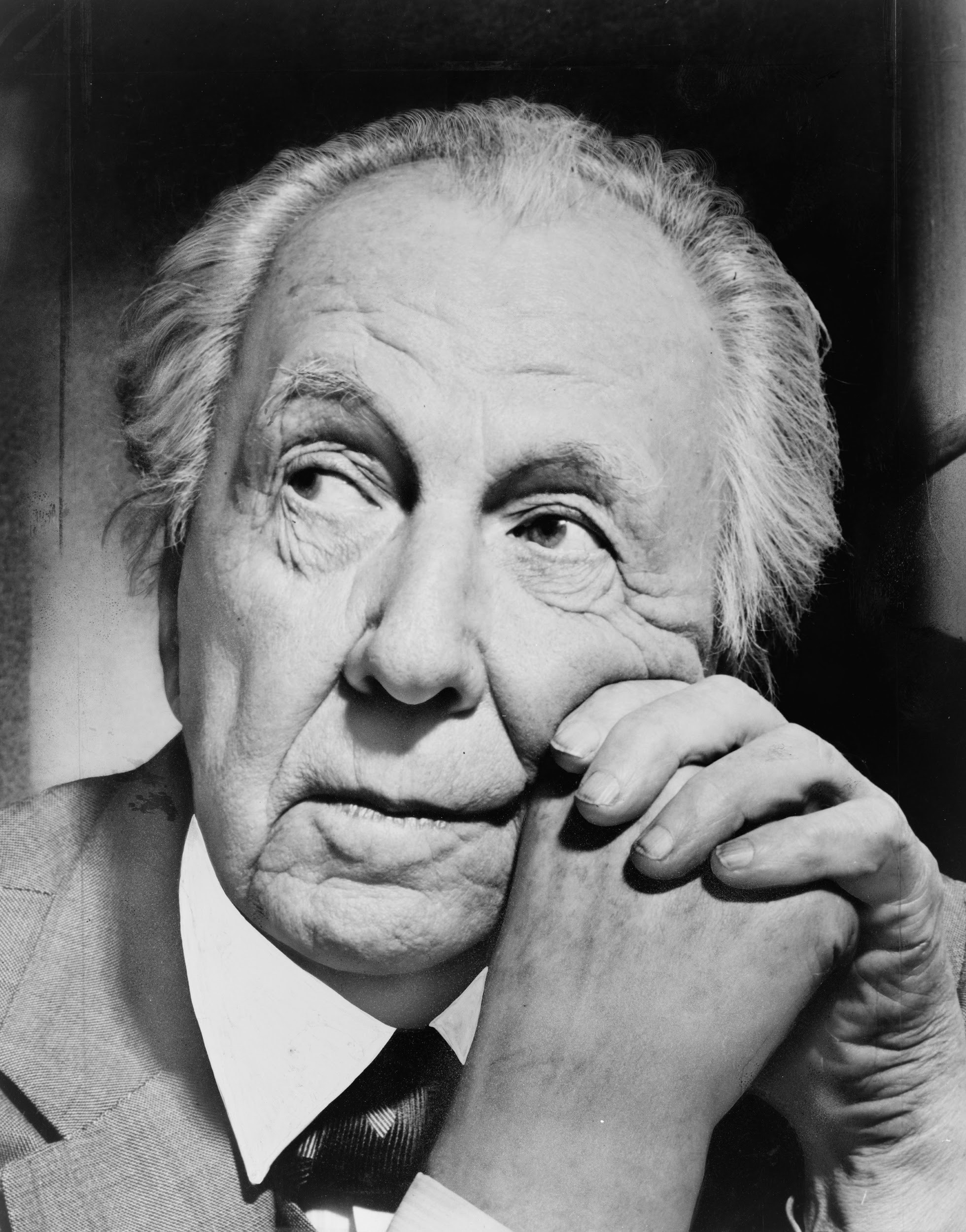 As mentioned, Frank Lloyd Wright is not only credited with inventing the concept Organic Architecture but also championed its common use in construction.

Wright began to use the concept of nature as part of the building process very early on in his career. His mentor, Louis Sullivan, had the mantra that “form follows function,” meaning that a building’s shape must be secondary to, and come from, its purpose.

As early as 1908, we began to see that Wright only partially agreed with his mentor and soon changed how he designed and created buildings, instead arguing that “form and function are one.” We can see this by his intricate blending of nature into each and every structure that he created.

Wright’s book A Testament was published in 1957 and served as a memoir of his career.

The book contains an essay called “The New Architecture: Principles,” in which he declares nine principles of his “organic” approach to construction.

He discusses human scale to our surrounding landscapes, the use of glass and steel and how they impact space, and more. As the author of the movement, Wright’s nine principles are highly respected.

However, Frank Lloyd Wright was not the only architect interested in the ideas of Organic Architecture. Once he introduced the idea, other creative architects and artists were quick to incorporate the style into their portfolios. This practice, of course, also allowed each individual to articulate his or her own vision for the style and the future of the movement as a whole.

For example, British architect and planner David Pearson even went so far as to propose a list of actual rules to govern the organic architecture movement. 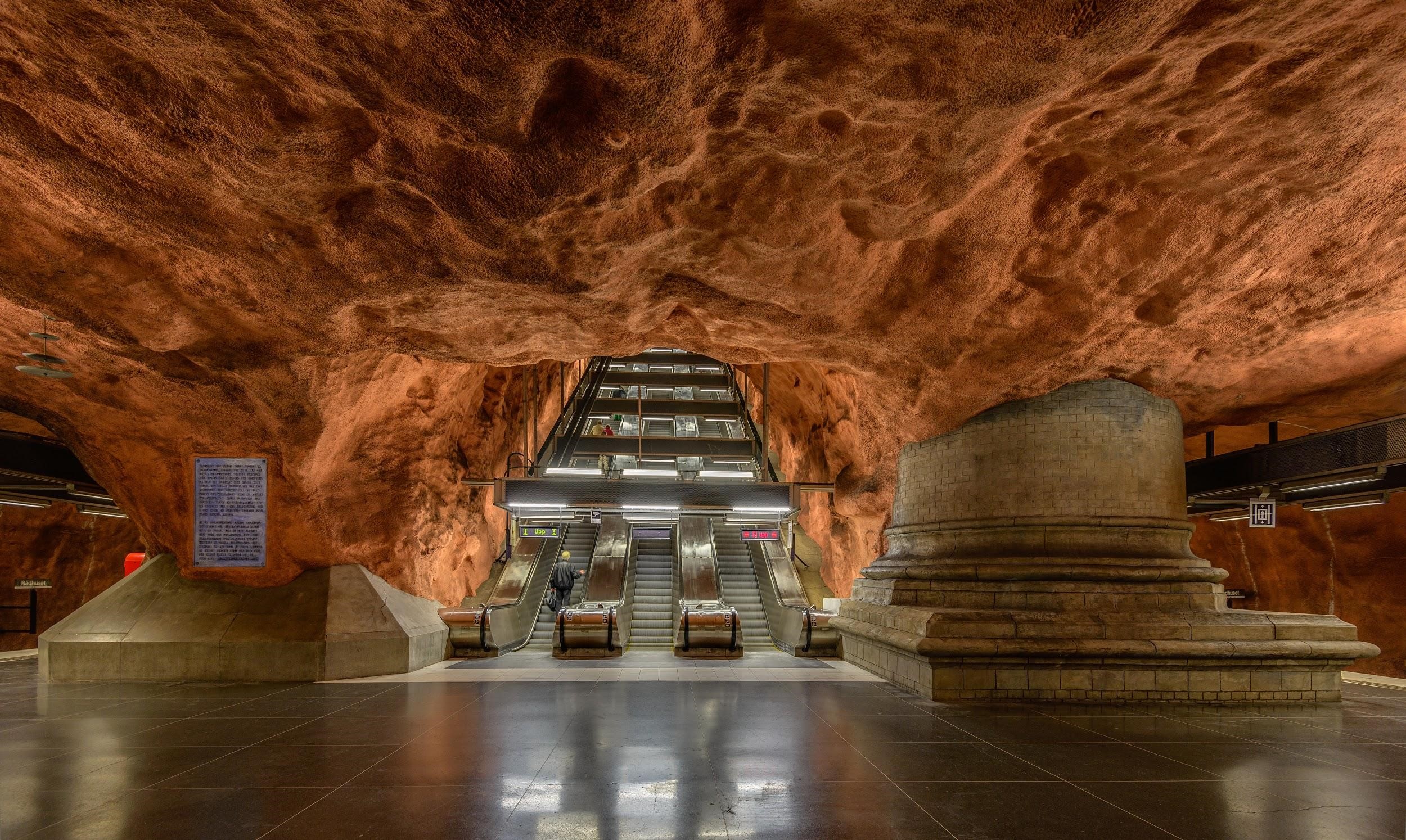 He named his rules the Gaia Charter, after the charitable organization committed to sustainable development, which still operates in the United Kingdom to this day.

Pearson’s rules for organic buildings are as follows:

The first point of this charter is the easiest to understand.

This is because considering “Organic” Architecture as something that is completely connected to nature is a simple task. It’s understood that the buildings seek to complement the earth, not conquer it.

However, Pearson’s subsequent assertions about what an organic building must be might seem a bit more abstract or even confusing at first glance.

To fully understand the meaning of a building that “grows out of the site” or “celebrates the spirit of youth, play and surprise,” one must examine these requirements with the help of a physical example or the movement, rather than just as abstract ideas. 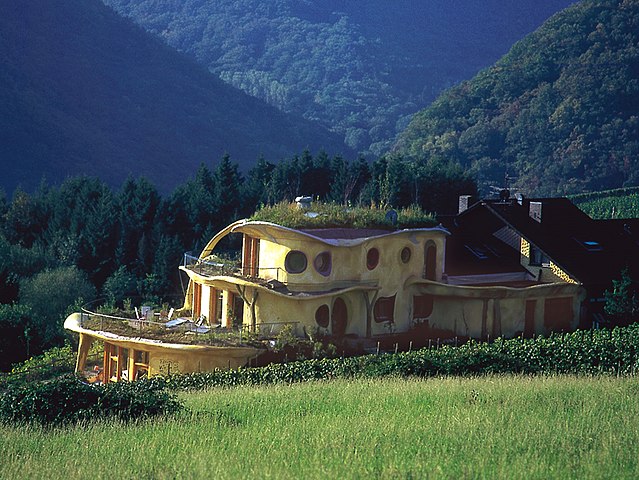 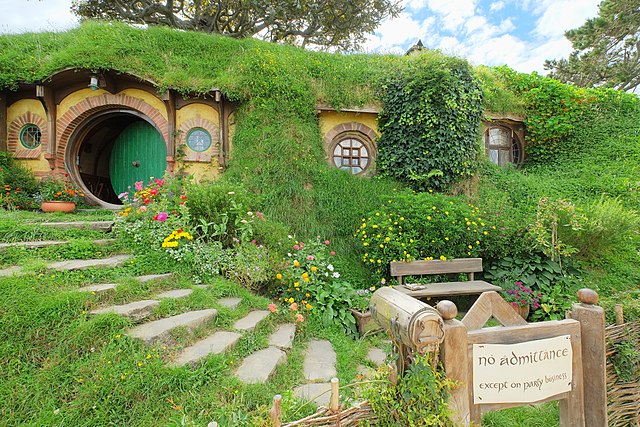 Top: This dwelling near the spa town of Bad Neuenahr-Ahrweile in the central-western part of Germany is a good example of Organic Architecture complementing the surroundings (photo credit: Försterhof Bad-Neuenahr Ahrweiler by Udo Heimermann under license CC BY-SA 4.0).
Middle: A great example of the philosophy of Organic Architecture came from the mind of JRR Tolkein, who imagined Hobbits living in their "Hobbit Holes" built into the hillsides of Hobbiton in Middle Earth. Peter Jackson actually built a portion of Hobbiton for this three-part film The Lord of the Rings (photo by Pseudopanax, Public Domain).
Bottom: Earth-sheltered homes like this one in Switzerland look as if they could be part Hobbiton. Some consider earth-sheltered homes to be prime examples of Organic Architecture (photo credit: Earth House by Archi0780 under license CC BY-SA 4.0).

As mentioned, since Wright created the idea in the early part of the 20th century and subsequently coined the term, other architects have taken his design principles to heart and put them into practice.

Here are the most famous examples of buildings constructed in the Organic Architecture style around the world.

The most famous example of the Organic Architecture movement is probably the most famous of all of Frank Lloyd Wright’s buildings.

In fact, it’s likely the home you thought of when you first read Wright’s name: Fallingwater.

Wright built this home in the 1930s as a holiday home for the extremely wealthy Kaufmann family. The Kaufmanns were originally keen on the property because of the lovely waterfalls it features and reportedly looked forward to enjoying daily views of them. 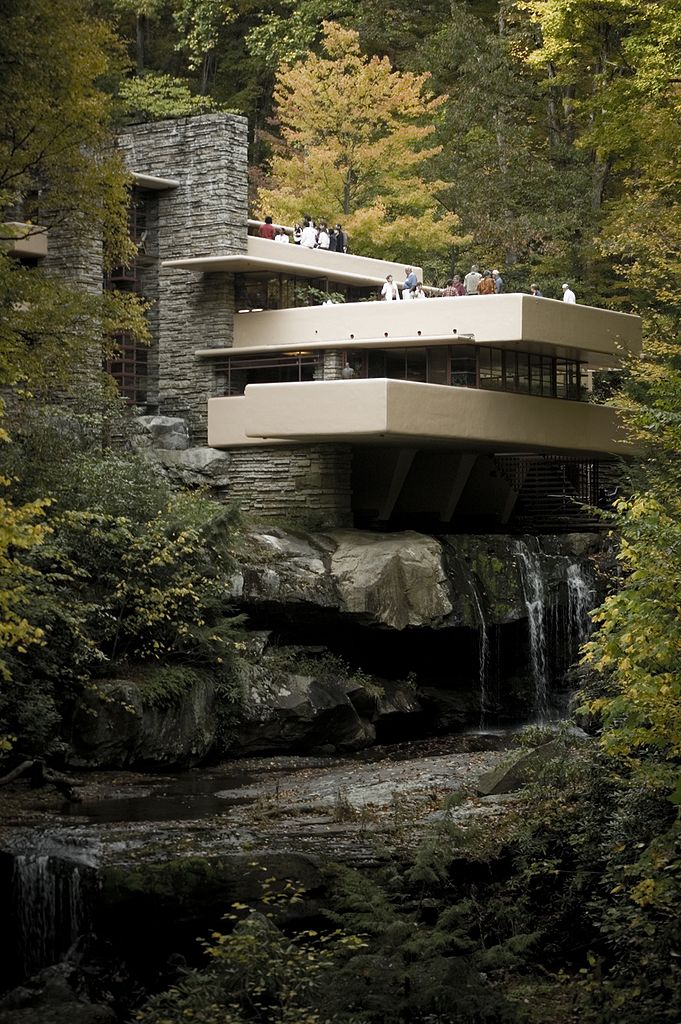 Here you can see why Falling Water is a good example of the Organic Architecture principle of a building "growing out of a site" (photo credit: Wrightfallingwater by Sxenko under license CC BY 3.0).

Wright decided in a career-defining move, however, to make the home one with the water instead of simply using it as a point of observation. Because of this, one can truly see the Pearson idea of “growing out of a site” coming to life. 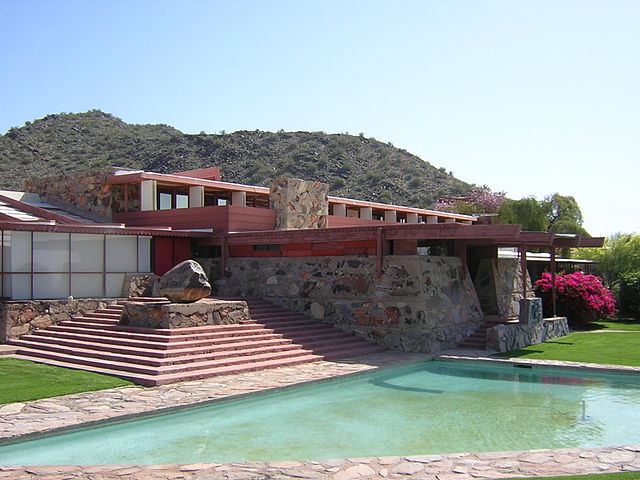 Although not as famous as Fallingwater, this was Wright’s home and design studio, so it held a special place in his heart. It also perfectly captures the heart of the Organic Architecture movement.

Because of its Arizona location, Taliesin West’s design ensures it becomes one with its desert surroundings. The clean lines of the home’s different levels can even be seen as shifting sandbars. The home’s use of glass also closely ties it to nature, as the inside and outside of the structure completely blend together. 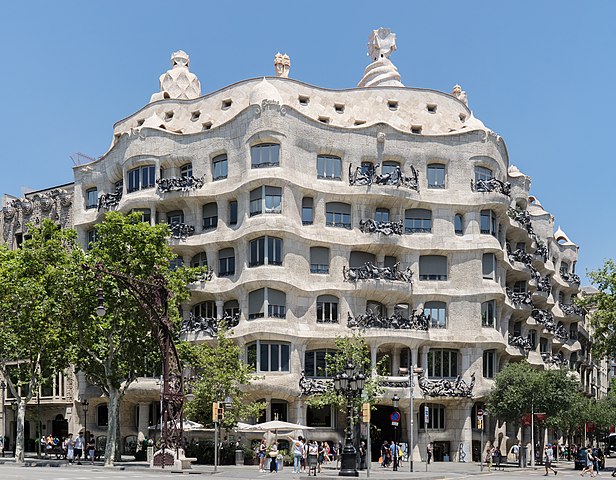 This apartment building looks like it’s recently burst out of the earth, giving a new meaning to the Organic Architecture Movement. Due to its rippling stone walls and honeycomb structure, the building is often called “The Quarry” by locals in Spain.

It was a controversial build in the early 20th century; however, it is now one of Spain’s top tourist attractions (and a very expensive building to live in). 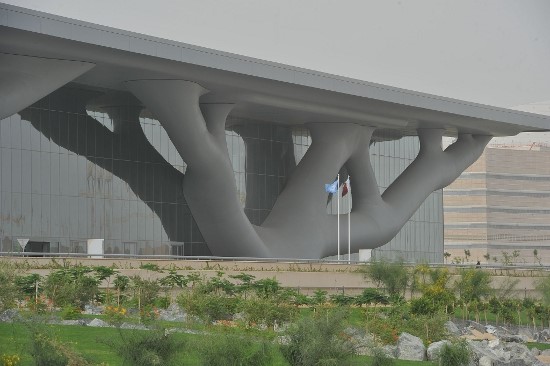 The convention center was designed by Arata Isozaki. It is most recognizable by its facade – that of two trees wrapping around each other and seemingly supporting the building’s exterior overhang. The photograph above is a detail of a trunk and supporting branches of one of the trees.

This building is not only a beautiful example of Organic Architecture but is also of great historical and cultural importance in its home country. This is because the tree isn’t just any generic tree, it’s mean to be the Sidrat al-Muntaha, a mythical tree that is holy in Islam. 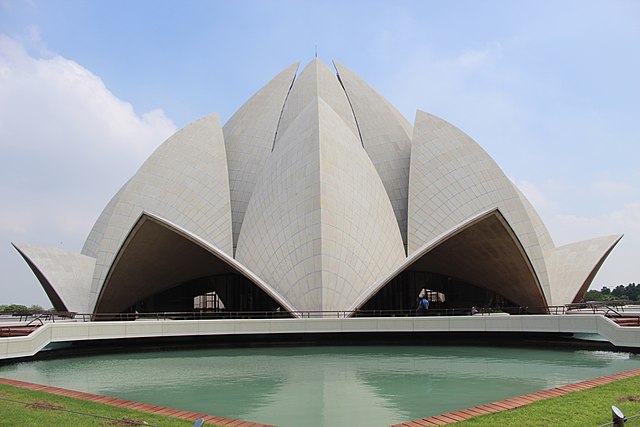 This easily recognizable temple is in the shape of a giant lotus flower. It was designed by Iranian-Canadian architect Fariborz Sahba. This temple is a meeting place for the Bahá'í religion.

Sahba has said that his design for this temple is meant to show peace and oneness. Just as the temple is one with nature, so are we as mankind one with each other.

Seen from a distance, the effect of the temple's design as a blossoming lotus flower is apparent and Fariborz Sahba's vision is realized (photo credit: Lotus Temple, New Dehli, by Jools Asher from England under license CC BY 2.0).

Because of its white petal-shaped exterior, the building is sometimes mistaken for another building with large white “sails” – the opera house in Sydney, Australia.

Where Have You Seen Organic Architecture — And What Do You Think of It?

Championed by Frank Lloyd Wright, the Organic Architecture movement is all about combining form and function. It seeks to marry a building to its environment and find a balance between natural and man-made structures. The style has been successful in many spaces, domestic, religious, and commercial.
Many people love organic architecture but not everyone. And it hasn't been without controversy over the years. Some critics site the expensive cost often associated with it (at least in the more high-profile buildings).
Are there homes or buildings that you've seen that embrace organic architecture that we haven't listed here? What was your reaction?
House Plan Styles
Architectural History
Green Building
Design Trends
VIEWS: 8877
advanced 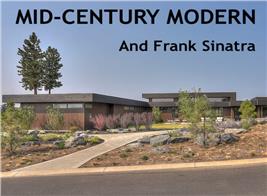 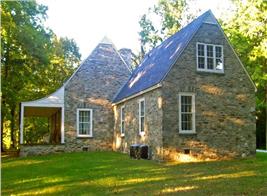 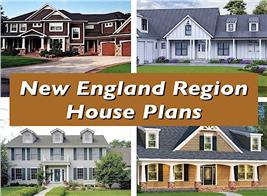