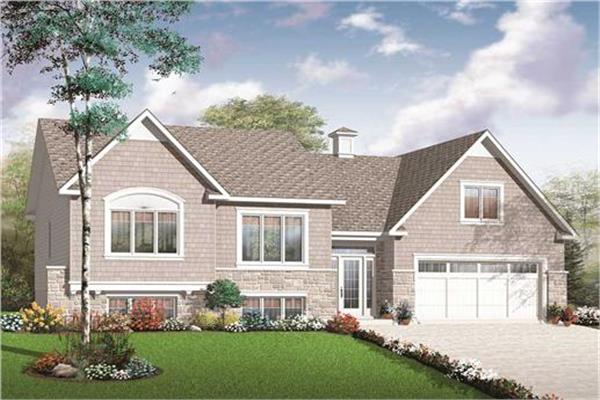 Split-level home designs (sometimes called multi-level) have various levels at varying heights, rather than just one main level. Generally, split-level floor plans have a one-level portion attached to a two-story section, and garages are often tucked beneath the living space. This style home began as a variation of the ranch, and split-level houses often maintain the shallow pitched roof and architectural styling of the ranch. These homes work great on smaller lots due to their stacked design.

Basements in split-level floor plans are generally very shallow; thus, the windows are just above the ground level providing a lot of sunlight through the windows into the lower level. These types of house plans are often described as having "daylight basements."

There are several advantages to building a split- or multi-level home plan. The footprint of the home is small, inasmuch as the various levels are stacked. As a result, some of the more expensive parts of a home (the foundation and the roof) are smaller than they would be on a ranch style home plan. There are many areas where, due to higher water tables, full-depth basements are likely to have flooding problems. Multi-level floor plans are excellent for this type of area since they are not built deep into the ground as is a full basement. Due to the smaller footprint and the ability to build split level house plans in higher water table areas, these types of floor plans were very popular for quite some time in the 80s and 90s as high-density developments required flexible floor plans. Multi-level house plans provided adequate size while taking up less ground area.

Throughout the years, split-level home plans have evolved significantly. You can now find split-level floor plans of all types of architectural styles including Country and Victorian.